Last year, many were delightfully surprised with Bad Moms, a raunchy comedy that did surprisingly well at the box office, prompting STX Entertainment to quickly re-up the entire cast for another go-around to put together another installment in time for the holidays this year.  The following review of A Bad Moms Christmas will be spoiler free.

Christmastime is a difficult time of year for moms.  They have to shop, clean, cook, entertain, and so much more.  Unfortunately, our group of three moms must also deal with their mothers coming to town, forcing them to be even more on top of their game.  However, our group of three underappreciated moms are tired of all the pomp and circumstance, rebelling against the system, and their moms in the process.

If you’ve been following MovieBabble for some time, you might be aware of my previous discussion of STX Entertainment.  After the disaster at the box office that was Valerian and the City of the Thousand Planets, STX needed to release a few solid hits in order to get back into favorable financial position.  The Foreigner performed solidly a few weeks back (mostly from overseas markets).  And now, STX quickly moves back to one of its most profitable franchises, Bad Moms.

However, what makes A Bad Moms Christmas interesting is that it’s released only a year after the first film, meaning that they had to write the script, hire actors, and shoot the film since last July.  Movies like A Ghost Story are made on a similar timeline, but A Bad Moms Christmas can’t help but feel like a slapdash effort in order to cash in on the success of the first film. 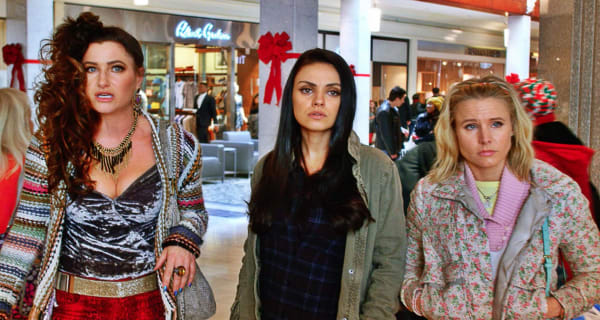 The Actors Try in A Bad Moms Christmas

Although there’s some horrible problems with this film, the actors involved don’t really want to hear it.  The entire cast is doing their very best to work with the script and situations they are given.

As always, it’s great to see Kathryn Hahn up to her usual, potty-mouthed act.  Although a lot of the raunchy humor in A Bad Moms Christmas doesn’t work, she does her best and is the source of the few jokes that this movie has at its disposal.  Watching her and her mom, Susan Sarandon, interact throughout the film is easily the most entertaining bit in the entire movie.  They’re perfect matches for each other, providing all the fun and chaos that actually feels real within the context of the story.

But other that little piece of hope, A Bad Moms Christmas is a serious misfire.

One of the Cheapest Looking Movies of Recent Memory

As stated above, A Bad Moms Christmas was scripted, cast, and produce in almost exactly a year’s time.  And, just by looking at the screen, you can really tell.  The film is shot in such a way that it looks like the very first episode of Curb Your Enthusiasm.  Except, that program actually has the wit and cleverness to be enjoyed despite its inherent technical flaws.

While Curb goes for quaint, I’m not quite sure what type of aesthetic A Bad Moms Christmas is going for here.  The entire movie looks very ugly, appearing as if STX or the directors didn’t have the time to make it look nicer or just didn’t care.  There doesn’t appear to be an effort to make the experience cinematic.  Rather, it appears that the film blew all its money in assembling a high profile cast and didn’t have any left over to pay for new cameras.

This issue might seem a tad superficial to some, but it speaks to a larger issue with this film and other studio comedies in the last several years.  Comedies have gotten less and less interesting from a visual perspective in the last decade.  A Bad Moms Christmas in particular looks very flat and dull.  One of the main parts of a comedy is properly staging the jokes.  If you don’t add anything appealing, you’ve already lost most of the audience on a subliminal level.  They won’t quite be able to put their finger on it, but they’ll leave the theater saying, “it just wasn’t that funny.”

Calling this Movie “Generic” is an Understatement

Then we get to what the actors actually say, which is another issue entirely.  I don’t mind a good, raunchy comedy.  In fact, I love them!  Check out my favorite comedies of all-time just to see how much I love dumb, crass humor (shameless plug, I know).  However, when a movie blurts out obscenities just because, it’s one of the most infuriating things in Hollywood.

All good comedies need some type of good writing to them.  Yelling “action” and telling actors to improvise only works about 5% of the time.  In those cases, there’s a great director that applies some type of structure and great comedic actors that are amazing at riffing off of feel.  A Bad Moms Christmas has neither of these traits.  All its gross out gags and f-bombs feel forced, if not incredibly awkward.

Raunchy comedy still needs to be clever and intelligent.  Just saying the f-word doesn’t merit laughs, there needs to be a fun angle or spin to it.  When you can see the joke coming from a mile away, it just isn’t funny, no matter the verbiage.

A Bad Moms Christmas is the epitome of a generic studio comedy.  It looks like a sitcom shot back 2005, looking as cheap and flat as can be.  Instead of injecting cleverness into its plot to make its raunchy elements more than just raunchy for the sake of being raunchy, it settles for cheap gags that go after the lowest common denominator.

If that weren’t bad enough, the film even sets up for another sequel/spin-off, saving its biggest gut punch for last.

Thanks for reading!  What are your thoughts on A Bad Moms Christmas?  Comment down below!

‘Rocks’ Is a Celebration of the Resilience and...

Your review is much better than the film. Hence, I nominate you for Blogger Recognition Award. Please go to the following link:-
https://dave42blogger.wordpress.com/2017/11/10/blogger-recognition-award/

The boyfriend and I loved Bad Moms, mainly for Mila Kunis but for also how hilarious it was. It’s quite disappointing to see that this one might not live up to the first one’s potential. I think I shall wait for this one to hit Playstation before watching it.

That would be smart. It’s nowhere near the quality of the first one

The original “Bad Moms” flew right past me last year and I hardly knew it. So when I saw CinemaSins tear that film to pieces in time for its sequel, I rolled my eyes at how generic, formulaic and unappealing it was. I couldn’t believe that it somehow was profitable enough to warrant a sequel. What it is about bad adult comedies these days where it’s practically become law for every character to act like utter jerks and curse every five seconds while also rambling on about sex? In my opinion, Deadpool is far superior since it’s a superhero film masquerading as an adult comedy and it has far more going on with its simple story that what we get here with this series. I have no plans of seeing this, but can take your word that they pumped this “thing” out a year after its original since it most likely looks rushed. May Thor: Ragnarok smite this feeble film by the end of the weekend.

It’s just such a cheap, lazy film that I hope makes no money at the box office. I want comedies to actually be smart and inventive again.

Looking for Something to Watch?

The Best Movies Released During Quarantine