With Hollywood continuing to look for older properties to update for a new era, MGM has finally decided to modernize Overboard, a bizarre romantic comedy from 1987 that starred Kurt Russell and Goldie Hawn.  And while this new version of Overboard doesn’t succeed, it’s fascinating — from a sarcastic point of view — to see what Hollywood deems suitable for a remake in 2018 and beyond.

Kate (Faris) is just struggling to get by.  While she studies for her exam to become a nurse, she also has to work two jobs around the clock to keep a roof over her and her childrens’ heads.

One day, while cleaning the carpets onboard a yacht, Kate gets a little snippy with Leonardo (Derbez), an overly entitled heir to a massive fortune.  Leonardo and his large ego simply won’t have anyone act in such a way, so he pushes Kate off the boat along with her cleaning equipment.  Now Kate owes the company $3,000 in fees from the broken equipment, and she seems out of options — or so she thought.

After a late night of partying, Leonardo falls off his boat into the water.  Even worse for him, the accident causes him to suffer from amnesia.

As word of the incident quickly spreads around town, Kate hatches a plan to teach Leonardo a lesson.  She goes to the hospital and convinces Leonardo that she is his wife — and she immediately puts him to work.

We’re in an age where Hollywood is content with rebooting and remaking just about everything.  We already had to deal with the bizarre remake of Point Break, and now we have Overboard.

For those unaware, Overboard was initially a 1987 film starring Kurt Russell and Goldie Hawn.  But, what made the film so bizarre was that Goldie Hawn’s character was the one that suffered from amnesia, and Kurt Russell’s character essentially made her his worker, forcing her to look after his family.

This time around, MGM and the creative minds involved decided to gender swap the plot to make it a little less creepy while also adding in Latin American Star Eugenio Derbez for the movie to appear attractive to foreign markets.  Anyway you look at it, this version of Overboard feels like one big calculation to gain a profit — which makes complete sense when you factor in the well-documented financial troubles of MGM.

For what is seemingly the first time in the history of Hollywood, a cold, calculated business decision turned into a fun, creative element for a film.  It’s no secret that Eugenio Derbez was meant to attract the Latin American demographic to see this film.  But let’s face it, there isn’t enough Latin American representation in Hollywood films these days.

One can appreciate this fact purely on the basis of someone seeing their own race in a film for a change, but the movie also weaves it into the narrative quite well.  Eugenio Derbez is an incredibly talented man, and he’s having a lot of fun acting as man who lost his memory.  He’s essentially a big child that has to learn to adapt to a new life, and it’s quite humorous to watch him squirm.

However, where Latin American culture truly shines in the film is in the sarcastic view of the telenovela.  Characters comment on the absurdity of those shows with gleeful abandon, and an entire section of the plot is a riff on telenovelas with an over-dramaticized fight for a company while the CEO lies on his death-bed.  The actors understand the humor in juxtaposing such a melodramatic section of the film with the silly, central romance, and Overboard benefits as actors ham it up with glee.

Over 30 Years Later, the Idea for Overboard is Still Creepy

Still, Overboard is handicapped by its premise that is still very creepy, even if those involved did their best to fix it for a new audience.

The genders are thankfully swapped this time around so Overboard doesn’t have a looming presence of women enslavement hanging over it, but that doesn’t change the fact that a character is still acting as the other’s spouse while forcing them to live a fake life only to then pass it off as harmless humor and romance as the film eventually goes down a path that is similar to many other studio rom-coms.  To that, I say “no, movie!  Stop that!”

I’ll give the movie credit for establishing that Derbez’s character needs some type of retribution at his expense for his initial actions towards Faris’ Kate, but there’s probably better ways to go about it.  Not only are Faris’ acts criminal, it’s quite off-putting to see someone get taken advantage of in this manner.  In essence, Faris’s character overcorrects for past wrongs.

There’s a way to make this plot setup work, but Overboard contains an odd feeling of sentimentality and fake authenticity that approaches the subject in the same earnest manner as any other harmless romantic comedy — that’s just not the correct fit in my personal opinion. 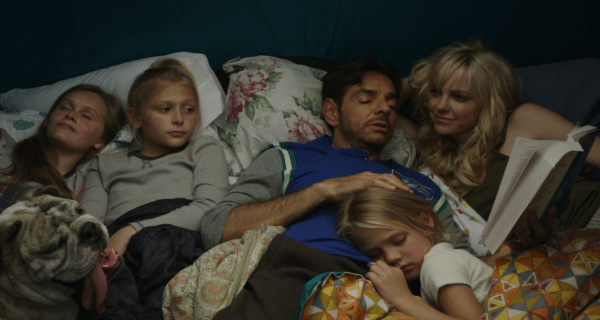 Overboard is Far Too Tame

There’s a version of Overboard where the director and writer tackle the amnesia part of this story with a sense of biting wit combined with a dark touch that perfectly captures the right tone for the situation — and I want to see that movie.

Instead, this update of the 1987 original is essentially the same and construction, and that’s where it ultimately falters.  Overboard needs a dark underbelly or even an element of magic surrealism to capture the true spirit of this odd and somewhat gross pairing.  As currently constructed, the 2018 version of Overboard contains comedy that is painfully safe.  It’s trying to present itself as a standard studio comedy when it should probably play as a twisted arthouse movie.  It’s afraid to tackle its premise with any bite and we as the audience are worse off for it.  It never takes any chances, and a comedy where the humor is limp is just a dull experience that you’ll soon forget about after leaving the theater.

Too tame and still too weird, Overboard is an inherent misfire that sinks on its premise alone.  While Anna Faris is consistently lovely, the film doesn’t utilize her talents at all, and it’s such a shame to see such a talented person go to waste.  Eugenio Derbez should do enough to please international audiences, but there isn’t enough fresh, innovative comedy within the film for anyone to rush out to theaters to see it.  Overboard is completely uninspired, and a movie with that description will never earn a recommendation from this critic.

Thanks for reading! What are your thoughts on Overboard? Comment down below!

‘Driveaways’ is One of the Best Films of...

‘Bad Trip’ is Exactly as Advertised: a Stupid,...

So they “modernised” the disturbing premise of the original by saying, “Well, it’s okay if a woman does it to a man”? I hate that double standard.

Basically! There’s not too much more to the movie beyond that setup

We don’t have this in Canada yet so maybe it’s for the best.

Yeah I’d say so lol! There’s really nothing to it

It looks like the theme has not aged well.