When it comes to villains, most superheros have just one or two iconic enemies. However, there are two heroes who have a plethora of baddies almost as iconic as they are. I’m talking, of course, about Batman and Spider-Man. Both have a ridiculous number of recognizable villains compared to their DC and Marvel counterparts. In the past seventeen years, much of Spider-Man’s rogues gallery has been explored on camera. With Spider-Man: Far From Home opening this week, there’s no better time to rank them than right now.

Beware, spoilers from Far From Home below.

Not Taken Into Consideration

The Spider-Man films have a lot of antagonists. However, antagonist does not equate to supervillain. For that reason, the following Spidey adversaries are not going to be considered part of Spider-Man’s rogues gallery.  In the case of Spider-Man: Homecoming a few characters never come into direct conflict with Spidey, so they are also excluded from the official ranking. This list will not include spin-off villains either.

This was a bit character that never really took off. Rhino was crammed into The Amazing Spider-Man 2 not only to bookend the film, but to plant seeds for the planned Sinister Six spinoff. Fortunately the spinoff and the entire Amazing Franchise was canned less than a year later. Paul Giamatti’s interpretation of the Rhino comes off as a screaming mess of steampunk with a bad Russian accent. Hands down, Rhino is the least memorable of Spider-Man’s rogues gallery on film.

He’s the shocker, he shocks people. The First Shocker in Spider-Man: Homecoming is about as useful as Slipknot in Suicide Squad. He punches Spider-Man once and is shortly thereafter disintegrated by Adrian Toomes. This character has one real thing going for him though, he gets to wear the classic Shocker suit. Still, his character has more of a personality than the Rhino, so he’s not dead last in Spider-Man’s rogues gallery.

Image via The Source

The Amazing Spider-Man 2 breaks the threshold of how many villains a movie can support. Unfortunately Sony’s second attempt at Harry Osborn gone bad fails to live up to Sam Raimi’s initial attempt. Harry goes from Peter’s bff to girlfriend killer in a matter of seconds. It doesn’t help that the disease that killed Norman Osborn after a years long struggle overtakes Harry in a matter of weeks. This Green Goblin is about as forgettable as the franchise he hails from, landing him on the third from the last spot.

Maxx Dillon is a loser, and so is The Amazing Spider-Man 2’s interpretation of Electro. If the character had the film to himself, Jamie Foxx’s Electro could have been great. Unfortunately, much of Maxx’s limelight is stolen by Harry Osborn. This lack of build-up tarnishes both characterizations and is a major cause of the film’s failure to connect with audiences.

Speaking of movies crammed with too many villains…

Sam Raimi did not want to include Venom in Spider-Man 3. See, Venom is a creation of the 80’s and 90’s, whereas Raimi’s love of Spider-Man is rooted in the comics of the 60’s and 70’s. Unfortunately for Raimi, however, Sony doesn’t know how to execute a successful franchise. So, Producer Avi Arad demanded Venom’s role in the movie and the rest is history.

Eddie Brock doesn’t have time to be anything but campy before Venom is thrust upon him. When Eddie finally becomes Venom, the result is a laughable knock-off of the icon fans love. Venom fails to be terrifying, engaging, or anything worth the money spent on special effects.

I almost didn’t include this incarnation of Doc Ock on the list, as she is a mere henchwoman to Kingpin. However, the plot twist of her inclusion was so well-done that she deserves a spot. Not to mention Katherine Hahn’s dark comedy take that makes Doc Ock stand out in a movie crowded with members of Spider-Man’s rogues gallery.

Herman Schultz makes choices. These choices aren’t drastic, but they give him depth. So, his decision to stick with Toomes makes the Vulture more likeable and Herman himself more relatable as a character. Not to mention the fact that this Shocker beats Spider-Man, at least until Ned saves the day. He may not be the lead, but he sure is a memorable addition to Spider-Man’s rogues gallery.

Dr. Curtis Connors had the makings of a great villain as a disabled scientist with a sincere connection to Peter and his parents. However, The Amazing Spider-Man ditches The Lizard’s Jekyll and Hyde potential for a cheesy plan of world domination. Curtis Connors becomes feral and decides to gas the world’s population, turning them into Lizard hybrids. The stakes are no longer personal and the villain suffers because of it. Unfortunately, what makes The Lizard a memorable member of Spider-Man’s rogues gallery is what he was set up to be, instead of what he actually ended up being.

Aaron Davis brings an interesting dynamic to Into the Spider-Verse. Unfortunately, The Prowler serves Miles as a character more than it serves Aaron. Miles’ Uncle’s reveal as a Kingpin thug challenges Miles and drives him into becoming Spider-Man. That being said, Miles’ reveal as Spider-Man leaves Aaron in a predicament that quickly leads to his death at the hands of Kingpin. Normally more than two villains in a movie is a death sentence, but Into the Spider-Verse pulls it off flawlessly.

Flint Marko, like most of Sam Raimi’s chosen villains, is very nuanced for superhero movies of the day. Marko is just a good man who’s had bad luck. He wants to care for his daughter, that’s it. Unfortunately he shoots Uncle Ben and holds Mary Jane hostage in trying to do that, but his intentions were still good. Even better, Sandman shows genuine regret for his actions, allowing Peter to grow to the point of forgiveness. 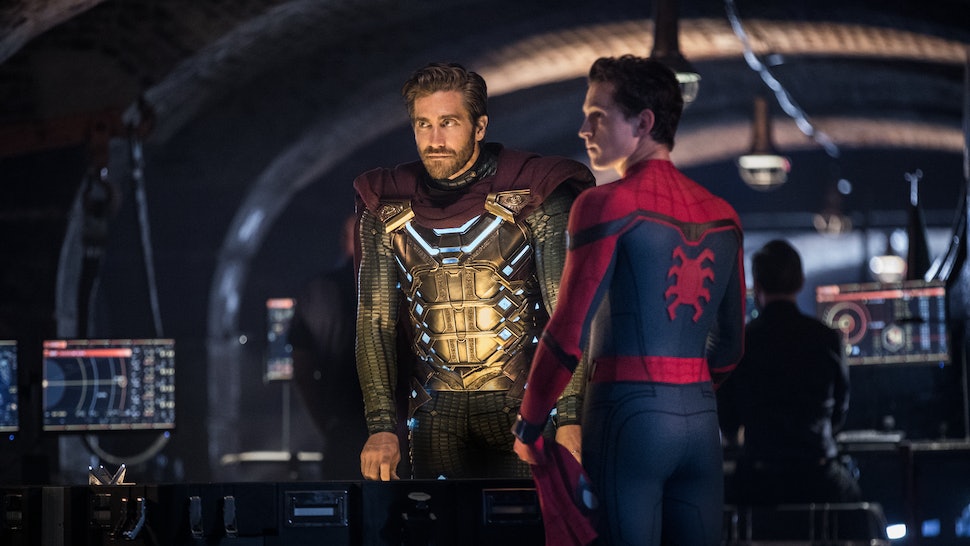 Surprise, Mysterio was a bad guy the whole time. Personally, I think Far From Home handled this reveal very well. The revelation about Quentin Beck and his vendetta against Tony Stark comes early on in the film. Despite Mysterio being a regular guy, he challenges Spidey with his wits and his knowledge of Peter’s emotional instability. Mysterio’s end goal may be something just shy of world domination, but his focus on stealing the limelight from Tony and Peter grounds him enough to make him truly memorable. Props to Jon Watts for taking the villain most considered to be too campy for the big screen and making him amazing.

I feel weird about including Kingpin on the list. While making his debut as a member of Spider-Man’s rogues gallery, Wilson Fisk is typically seen as the arch-nemesis of Daredevil. However, 2018 proved to be a dynamite year for the Kingpin as a Spidey adversary. Kingpin is brutal in Spider-Man: Into the Spider-Verse, killing Peter Parker in the first act. While his dimension colliding machine is somewhat farfetched, his desire to be reunited with his wife and son grounds him far more than an animated movie needed him to be.

Harry Osborn is a tough villain to place. First off, he’s not directly a villain for the first movie and a good chunk of the second. There’s also the fact that his arc was butchered due to the overcrowdedness of Spider-Man 3. That being said, Sam Raimi played the long game with Harry Osborn and it pays off. Not only is Harry the chief rival for Mary Jane’s heart, but he also thinks that Spider-Man killed his dad. Harry’s rage slowly grows throughout the course of Spider-Man 2 until it is revealed that his mortal enemy is actually his best friend. Harry is arguably the most fleshed out villain in Spider-Man 3 because of this, challenging both Spider-Man and Peter Parker.

Willem Defoe’s Norman Osborn/ Green Goblin is iconic. He was truly the first modern-day cinematic supervillain. He’s not as nuanced as some of Spidey’s other foes, but his struggle with duality mirrors Peter’s arc and allows the theme of the movie to be explored in greater depth. What really makes Norman stand out among Raimi’s villains is the fact that his shadow lingers long after death. Norman’s life constantly haunts Harry, pushing him to the dark side. Norman’s death constantly haunts Peter, forcing him to lie to his best friend.

Not to mention, the Green Goblin gives one hell of a supervillain speech.

The Vulture’s reveal as Liz’s dad is one of the best moments in the MCU. The tension that Keaton brings to this scene and the scene alone in the car with Peter makes him more menacing than half of the MCU’s villains put together. All this and the fact that Keaton is just a little guy trying to stick it to the man makes him one of the most nuanced and realistic villains in the MCU. Even though Toomes has a dark side, he still won’t sell out Peter’s identity. There’s a respect between Toomes and Peter, they understand each other despite disagreeing. The Vulture ranks so high among Spider-Man’s rogues gallery because there truly aren’t any other villains like him.

When it comes to Spider-Man’s rogues gallery, every villain falls about four limbs short of the #1 spot.

Dr. Otto Octavius is just that, Dr. Otto Octavius, for the first 45 minutes of Spider-Man 2. Raimi takes the time to explore Otto and give him genuine relationships before he even considers adding some robotic appendages. So, while Otto’s plan to build an artificial sun is somewhat farfetched, we get to see the intentions behind it. We get to see Otto lose his wife and his life’s work, and we get to see him cope with that loss, eventually leading to his sacrificial death.

Doc Ock also gets to play in Spider-Man’s world more than most of the other villains. Take the train scene for instance. The Goblin, Vulture, the Lizard, none of them could fight with the same depth and dimension. Because Doc Ock and Spidey both have a unique ability for climbing at odd angles, the train fight becomes four dimensional, which is why it still holds up fifteen years later. This and the fact that Ock has some killer one liners.

Thanks for reading!  What are your thoughts on Spider-Man’s Rogues Gallery and Spider-Man: Far From Home?  Comment down below!

The Best Gags in ‘South Park: Bigger, Longer, and Uncut’

The Best Movies of 2019 So Far (MovieBabble Presents: Babble With Brennan Ep. 1)

The MovieBabble Staff’s Best Movies of the 2010s

Every Star Wars Movie Ranked From Worst to...

The Movies that Define Each Decade from the...

Loving this list. Especially the part where all of the ones from The Amazing Spider-Man are on the rock bottom. But we all know the true number 1 Spider-Man villain (J. Jonah Jameson…duh!).

Looking for Something to Watch?

The Best Movies Released During Quarantine