The behind the scenes drama of Olivia Wilde's scandalous sophomore feature is infinitely more compelling than anything on screen. 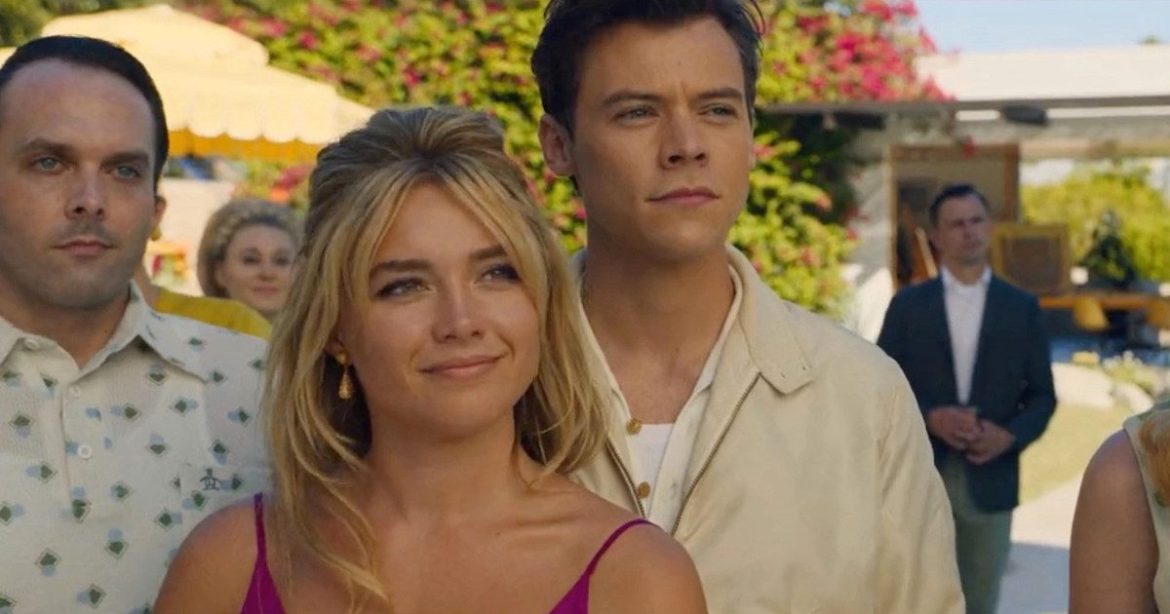 They say all publicity is good publicity, and Olivia Wilde’s much-anticipated directorial follow-up to Booksmart has brought with it a cascading deluge of behind-the-scenes gossip. From conflicting reports on Shia LaBeouf’s departure from the project, Wilde’s affair with star Harry Styles leading to “extended unexplained absences” from the set, Wilde’s alleged screaming matches with star Florence Pugh, and the uncomfortable, borderline hostile reunion of the cast at the film’s world premiere in Venice (complete with Pugh arriving fashionably late with an Aperol Spritz in hand), a bizarre hype and morbid curiosity has been created around this. All this drama has been fascinating to see unfold over the past twelve months and makes you wish that Don’t Worry Darling was even a fraction as intriguing and engrossing as the tabloid tales surrounding this uninspired, repetitive mess.

Pugh and Styles play Alice and Jack, a young couple living in an idyllic residential community in 1950s California known as the Victory project. Victory is seemingly hallowed ground for the American Dream to flourish; a suburban utopia where Alice and Jack’s life is perfect and they are the envy of their cul-de-sac. But things begin to unravel for Alice as she notices cracks in the facade of Victory. Visions of plane crashes and scantily-clad chorus girls performing a Busby Berkeley-style dance routine plague her mind and warnings from her neighbor Margaret (KiKi Layne) force her to question her own reality and sanity. Alice embarks to uncover what Jack and the other men of Victory are really doing when they go to work on the “development of progressive materials” and if the project’s enigmatic founder Frank (Chris Pine) is hiding something sinister.

Don’t Worry Darling, or as I’ll call it, The Truman Wives Reloaded, is exactly that; a derivative, incoherent, Frankenstein-esque concoction of other films that explored this narrative territory decades ago and in a manner that was far less obnoxious. Katie Silberman’s script weaponizes every tired cliché in the paranoid thriller arsenal to the point where every single twist and turn is either telegraphed or just predictable beyond belief. But Don’t Worry Darling believes it is a lot smarter than it actually is, thinking it’s always three steps ahead of the audience when it’s constantly three steps behind. It annoyingly holds its cards so close to its chest long after you have figured out the hand it will play, evaporating any tension or intrigue that Darling could have. Instead, Alice stumbles through this “protagonist discovers their life is a lie in a fabricated world they cannot control” plot via a series of surreal discoveries that are either nefarious machinations of the Victory project or just her own paranoid hallucinations, all set to a grating, emphysemic score from the usually magnificent John Powell that annoys more than it envelops. The film repeats this cycle of crazy events happening to Alice along with being subject to gaslighting from Jack and other Victory residents to such a frustrating degree that the finale feels so rushed and sloppy when it finally comes around; like it is playing catch-up after having wasted so much time in the preceding 100-odd minutes repeating the same scene.

Major plaudits must be given to the always impeccable Florence Pugh who gracefully carries this movie over a very meek finish line. She is able to salvage something from the wreckage and bring some urgency to this lifeless material with a dedicated, rousing performance the film quite frankly does not deserve. Especially if all the production woes and disputes she had with Wilde are to be believed, it’s a testament to Pugh’s professionalism and class as an actor to deliver a performance this strong under those circumstances. Pine does a fine enough job as a charismatic yet malevolent figure that he could pretty much sleepwalk through at this point, but Styles, unfortunately, struggles in a role that asks way too much from his very limited dramatic skillset to pull it off convincingly. The rest of the cast members are almost completely interchangeable, giving talented actors like Gemma Chan, Nick Kroll, KiKi Layne, and even Olivia Wilde herself very little to work with in thankless roles whose attempts at character development become complete third-act afterthoughts.

Mid-budget original studio films geared towards adults like Don’t Worry Darling are all but lost in the current cinematic landscape, and while we definitely need more of them, they should also be more “adult” and “original” than this. Florence Pugh gives it everything to make it work, but it’s too derivative and shallow to work as a social commentary and too prosaic to work as a genre piece, even when coated with a glossy retro-futurist sheen. Don’t Worry Darling is an undercooked dog’s breakfast of a film that is a litany of half-baked ideas around gender politics and patriarchal oppression that have been better and more intelligently explored elsewhere.

Thank you for reading! What are your thoughts on Don’t Worry Darling? Comment down below!