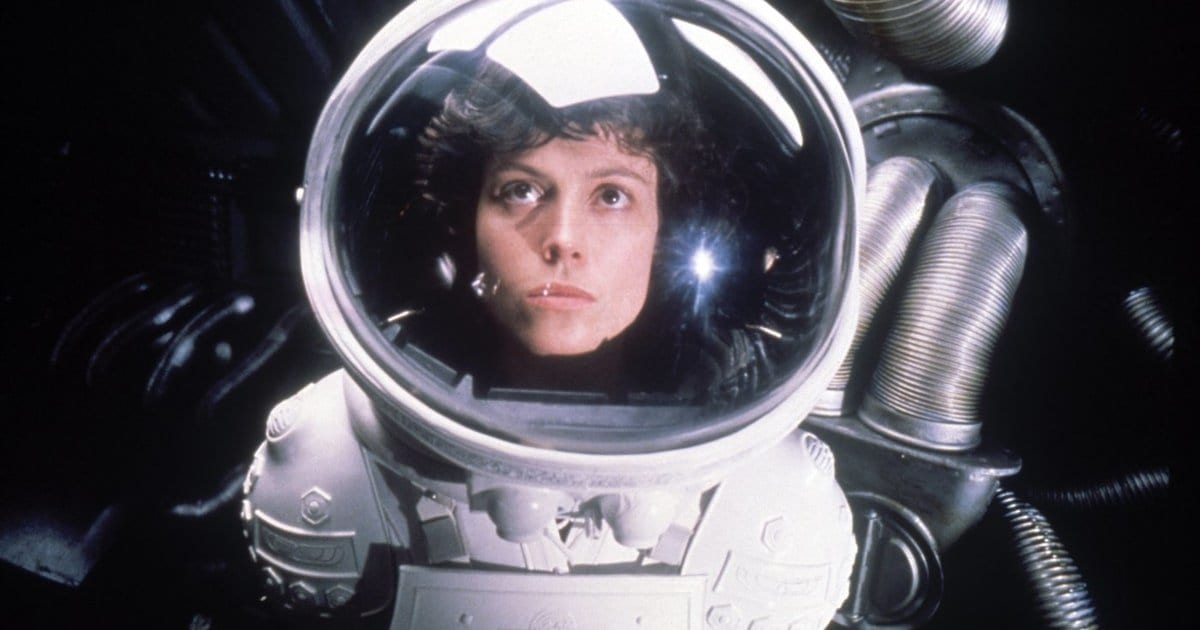 Ridley Scott’s next installment in the Alien franchise, Alien: Covenant, is about to bring us another round of horrific scares this weekend as it’s released to the masses.  With that in mind, let’s take a look back to the film that started it all, 1979’s Alien!  The film has certainly inspired many copycats since its release in theaters, but is it still worth all the praise all these years later?  The following review will be spoiler free.

Alien is directed by the aforementioned Ridley Scott and stars Sigourney Weaver, Tom Skerritt, and John Hurt.  The film follows a crew on board the Nostromo which is headed back to Earth after an expedition.  However, the crew inexplicably wakes up from cryo-sleep to a distress signal from a nearby planet.  The investigation of the signal turns dire as one of the crew members gets attacked by an alien that latches onto his face.  Due to complications with the being, a large, bloodthirsty alien gets loose in the Nostromo, leaving the lives of the crew in the balance.

As you should probably already know, Alien is considered by many to be one of the best science fiction movies ever conceived, it not one of the best films ever made period.  Feature on countless lists including the IMDb Top 250 list, Alien revolutionized the monster/horror genre and was cutting edge in special effects.

Its famous alien design broke the mold of simply a man in a rubber suit.  In combination with screenwriter Dan O’Bannon, H.R. Giger, the designer of the alien, wanted something that was terrifying on both a physical and psychological level, deepening the dread of the picture.  The famous “face-hugger” alien was the result.  In conjunction with the famous Xenomorph, the creature created an unsettling, sexual undertone, mimicking the idea of rape as the creature impregnates its victim or kills it with an inner mouth that also resembles a phallic symbol.

I’d like to think that most would agree in saying that the design certainly did its job.

Like my review of Raiders of the Lost Ark, this review will cover Alien from the perspective of less discussed topics within the film.  Why waste my time discussing points that have been debated ad nauseum?

Without further ado, the concept that I appreciate the most about this iconic film is the evolution of the main character, Ripley.  As the film begins, Ripley is simply one of the crew members.  The film does nothing to make her standout or force her into the middle of the picture.  She’s just doing her job as one part of a group.

This allows for us to become attached to other characters.  But also, it simultaneously allows for Ripley to earn her hero status.  We see her grow into a leader.  Too often do movies shove a character in our face and expect us to like him or her.  We like Ripley because she deserves it.

Ripley as a character is perfectly set up and expanded upon as the movie progresses.  From the moment we first see her, we understand that she plays by the rules.  This trait is never disbanded once a certain massive rage monster gets loose in the ship.  She always stays somewhat calm, almost acting how the viewer would as they reason through the problem from the other side of the television.

Moreover, Ridley Scott’s direction behind the camera improves all facets of the storytelling.

Scott changes camera movements and patterns on a regular basis.  This concept perfectly submerses you into the world he has created.  Before the crew wakes up from their sleep, Scott takes us on a tour around the Nostromo in a first-person perspective.  At one point, doors on the ship even open for the camera as it slowly moves forward.

Once the crew awakens, we get entirely different methods of direction and editing.  When people are walking through corridors, long takes are used that subconsciously increase the dread of the film.  When the horror elements of the film occur, quicker cuts are used to accentuate a fast, bloody kill.  Scott understands what camera work is required to make a scene really pop.

He slowly ratchets up the tension (even to a fault), making the atmosphere feel unlike any other.

Similar to Jaws, the alien in Alien is rarely seen.  If you were to calculate the amount of time that the Xenomorph is onscreen, it would probably be less than five minutes.  Sometimes, when we look back at films with “nostalgia goggles,” we tend to accentuate qualities of films that great and apply them to the entirety of the film.  However, this doesn’t mean that the creature’s presence isn’t felt throughout the film.

The combination of the editing techniques and a haunting score make the setting feel absolutely vile.  The space feels lived in, gross, and most importantly, ominous.  Alien perfectly explores the benefits of atmosphere to a movie’s themes and feel.  There’s something to be said about an impending death circling our characters, waiting to jump out and attack.  As one character notes, the Xenomorph is a “perfect organism.”  It’s an angel of death in a sense, merely a means to an end for our characters. 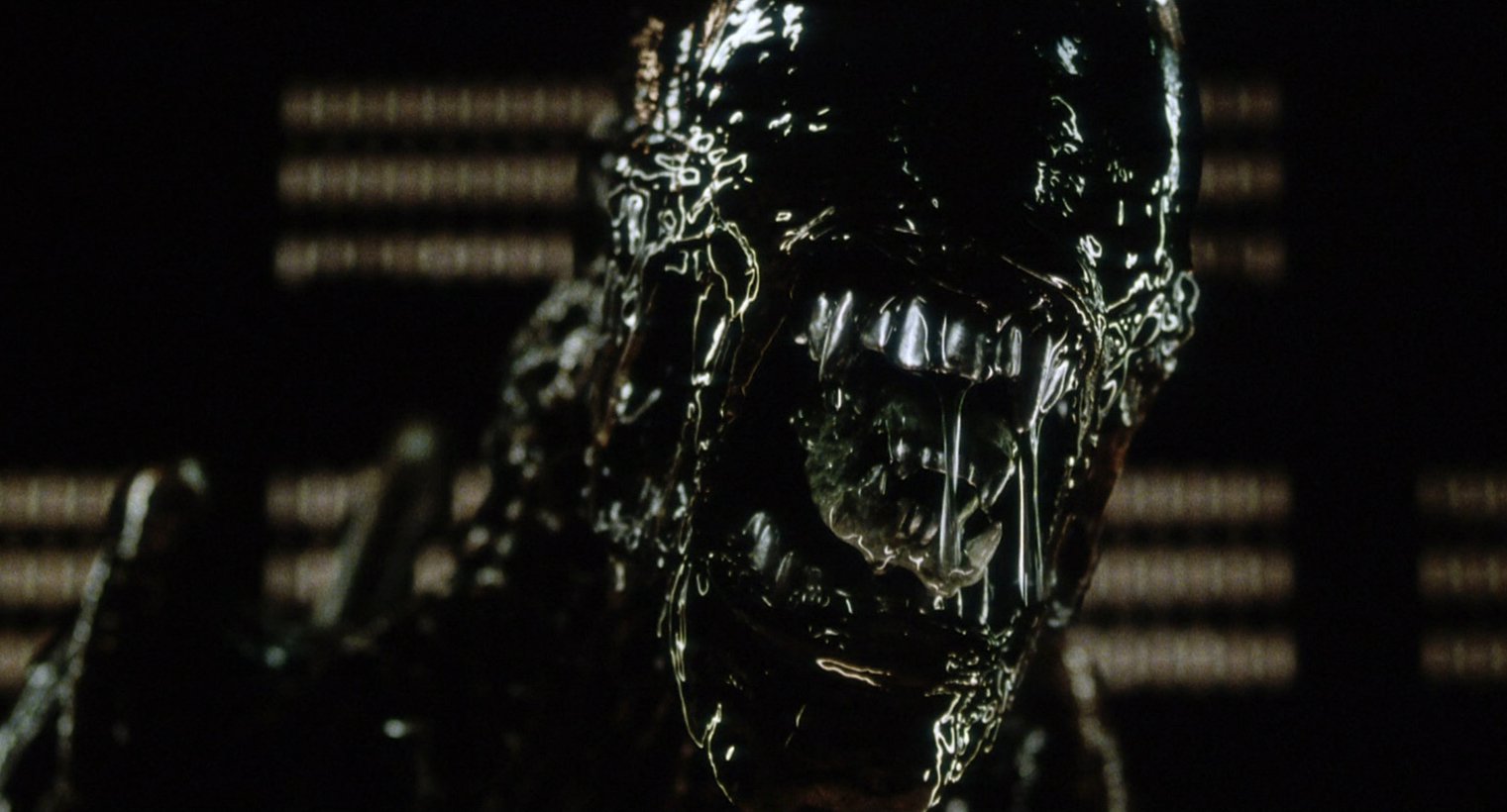 image via The Geeked Gods

Alien is certainly a classic film.  Not only is it a perfect lesson in the art of suspense, but it has since redefined the genre and set a new standard for monster movies that has seldom been matched, if at all.  It gets an A.  There’s something to be said about a film that takes it time to set up tense situations without metaphorically “blowing its load” and sacrificing subtext for gore.  Alien is at much poetry as it is a monster movie.’

[…] diverse in the types of music he produced. He worked with subdued, more creepy films like Alien but could also branch off into more ornate, loud scores like Star Trek: The Motion Picture. He […]

Great write-up. Really enjoyed you approaching it from a different perspective. Also, I am impressed to watch an old trailer which relies on building tension and mystery rather than telling you the whole plot in three minutes. The trailers these days give away too much in my opinion.

Totally agree! I think that comes with the landscape of so many more big budget movies getting released these days that movies have to make sure they stand out.

I love your point about characters being pushed in our face. Great observation that Ripley is not initially presented as our heroine. Makes the story arc that much more powerful as it develops.

Thanks so much! I really wish this would be utilized more. So often do we have to just accept the lead the character. It gets frustrating after awhile!

Maybe some film makers out there are reading these blogs and comments and taking notes (?). One can hope…

Maybe! Just trying to do my civic duty lol

What a great summary and review of the movie’s strengths. I’ve rewatched the series over the last few weeks to get pumped up for Covenant, it was so great to rewatch it. I sometimes take for granted how strong a series it is… Alien 3, Resurrection and Prometheus included lol Great work Nick!

Thanks so much! Every movie in the franchise (except maybe for AVP: Requiem lol) has something interesting going on in it that expands the mythology. Seeing Covenant tonight! So excited!

Ha I have to admit I skipped the AVP ones, the idea of the xenomorphs on Earth never really registered with me but the series-proper is pretty damn solid. Can’t wait to read your review of Covenant, I’m seeing it Sunday myself so I’ll check back in then. Enjoy! Looking forward to reading your thoughts :)

Thanks for your kind words!!