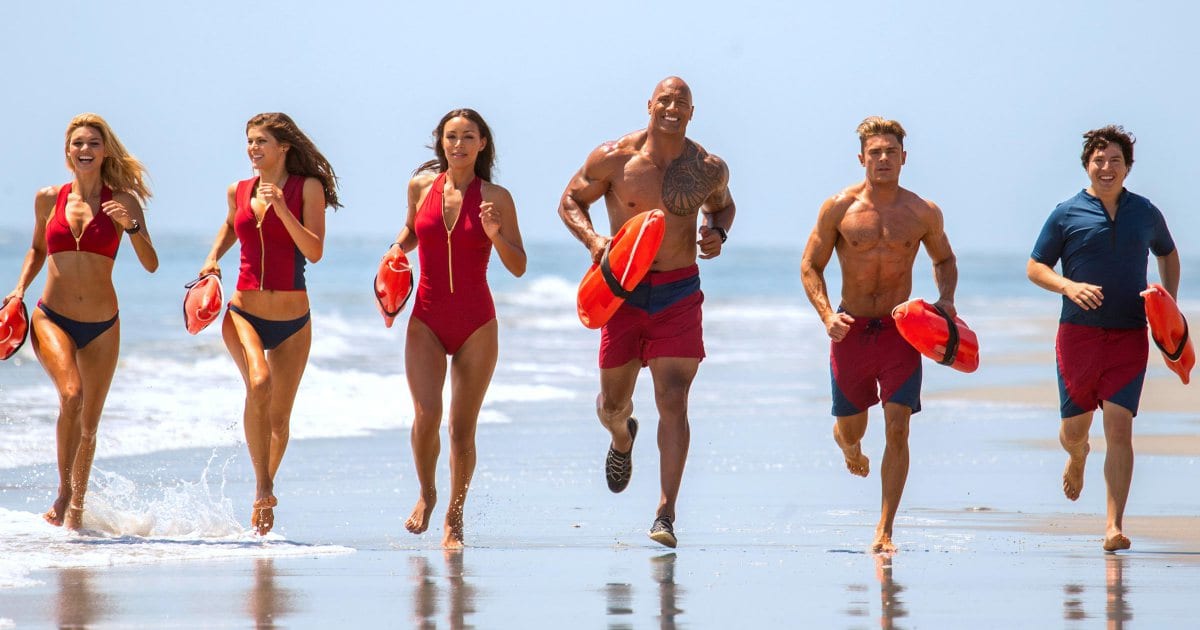 21 Jump Street and 22 Jump Street were smashing successes both with fans and at the box office.  Naturally, when studio executives saw how successful the films were they instantly got to work on which 80’s television show they would turn into a zany comedy.  There have been two such attempts in 2017 thus far: the much maligned CHIPS and now the show that had teenage boys everywhere getting a little too exited, Baywatch!  But did this reboot prove to be a worthy cause?  The following review will be spoiler free.

Baywatch is directed by Seth Gordon and stars a bunch of beautiful people in bathing suits including Dwayne “The Rock” Johnson, Zac Efron, Alexandra Daddario, and Kelly Rohrbach.  The film follows these lifeguards as they patrol the local bay of which they’ve been assigned.  Mitch Buchannon (Johnson) is the leader of the force that attempts to keep order on the beach by creating an incredibly cohesive team that works as one single unit.  However, a local mogul threatens to disturb the balance of the beach, forcing Mitch and hotshot Matt Brody (Efron) to come together and solve a case that is not meant for the typical lifeguard.

Hollywood continues its trend of attempting to piggyback off another franchise’s success by rebooting another 80’s television show into a raunchy, R-rated comedy.  What’s next?  Joania Loves Chachi?

I struggle getting excited for films such as these, which are obvious attempts to gain a quick buck because another movie was so popular.  Where’s the originality in that?

However, I then saw the team behind the film which made me wonder, could this be another comedy gem?  We certainly haven’t had one in a while and most people were certainly skeptical of films such as 21 Jump Street.

No matter what anyone says, The Rock may be the most charismatic, hard-working actor in Hollywood.  He’s seemingly in a film every other week, and yet he still is beloved by people everywhere and not characterized as “overexposed.”  You combine him with Zac Efron, who has shown to have serious comedic chops in the past with Seth Gordon (director of Horrible Bosses) behind the camera, and you might have a solid movie on your hands.

The best thing about this movie is obviously Zac Efron’s abs.  I mean, just look at those things: 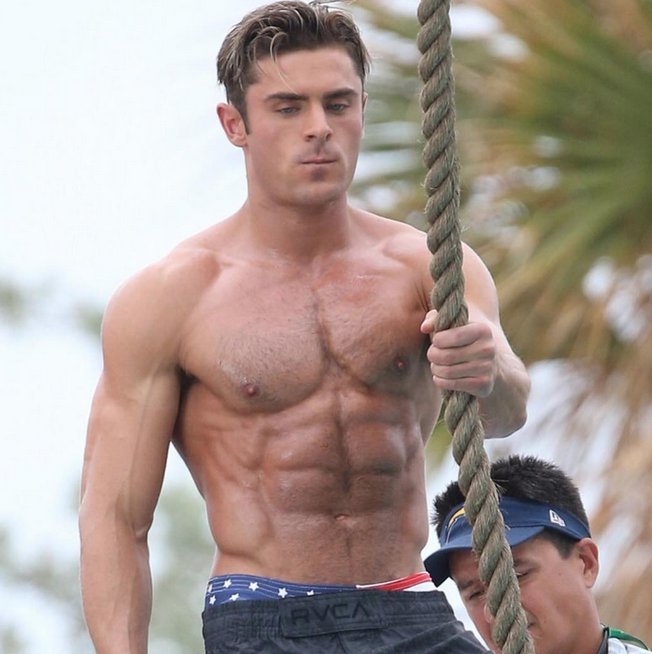 How is that even possible?  I need to go to the gym more…

Other than Efron’s cut midsection, Baywatch is a serious misfire.

Like I’ve said before, comedy films rely heavily on the chemistry of the cast which Baywatch surprisingly has to a certain extent.   You certainly get the feeling that everyone involved enjoys each other’s company and had fun during the filming of the movie.  However, what each of these characters is saying to each other is the major problem here.

The lines that these actors are reading just aren’t very funny.  There’s a few scenes where you can even notice the actors grimacing at what they’re saying because it’s completely unimaginative and sometimes even annoying.  I love a good dick joke just as much as the next guy, but they have to be slick or else it just comes off as crass and tasteless.

Since this film is so desperately trying to be 21 Jump Street, it must be compared to 21 Jump Street.  Yes, those films have countless gross out jokes with Jonah Hill and Channing Tatum, containing perfect chemistry.  However, they had fantastic writing to go with them from Phil Lord and Chris Miller, who have since signed on to direct a Star Wars film because they are so talented.  Baywatch, according to Rotten Tomatoes, had five screenwriters.  This is the best you could come up with?

Moreover, this film has the nerve to give Baywatch a somewhat serious story with ever present themes of teamwork and getting over one’s past.  Is this film really the best place for such concepts when put next to Zac Efron lifting up a dead man’s family jewels to check for evidence?  I certainly don’t think so.

Baywatch clocks in around two hours for those are you wondering, partly because it stops the movie dead to discuss the themes mentioned above while creating manufactured conflicts that are forgotten the second after they occur.  This film should have been an hour and a half long containing fifteen minutes of actual plot with the rest of the film delegated to showing beautiful people do beautiful things while in bathing suits.  Nothing more.

John Bass also stars in the film.  You probably don’t know that name, however.  This is mostly because Baywatch was meant to be his big break.  Unfortunately, his big break has yet to come because he was fairly insufferable for the entirety of the film.

It’s obvious from his stature and size that he was meant to be the comedic foil to the rest of the cast.  This is perfectly fine for a dumb comedy.  The problem is that the lines he delivers aren’t just unfunny, they’re routinely cringe-worthy.  I’m not sure whether the issues were in the writing or his performance, but it clearly didn’t work out well for the film.

Baywatch showed glimmers of a nice film somewhere beneath its unfunny exterior, but there isn’t nearly enough laughs for this critic to recommend it in any fashion.  It gets a D-.  I would strongly urge that you save your money for some of the other upcoming films that are due out.  They’ll probably be far more entertaining.  Unless you want to watch a bad comedy that contains hilariously bad fire and green screen effects, I would suggest waiting until next time to see a comedy in theaters.

There was a guy running on the street today, triggering recall of your “Baywatch” review. Shirtless, his abs would shame Zak’s.

I don’t know about that, have you seen those things??? Lol

LOL – The other part is how often Zak’s abs are mentioned in reviews! Does that say more about the movie, or the abs?

Maybe a bit of both!

Favorite lines: How is that even possible? I need to go to the gym more… and What I Didn’t Like…Continued…Continued