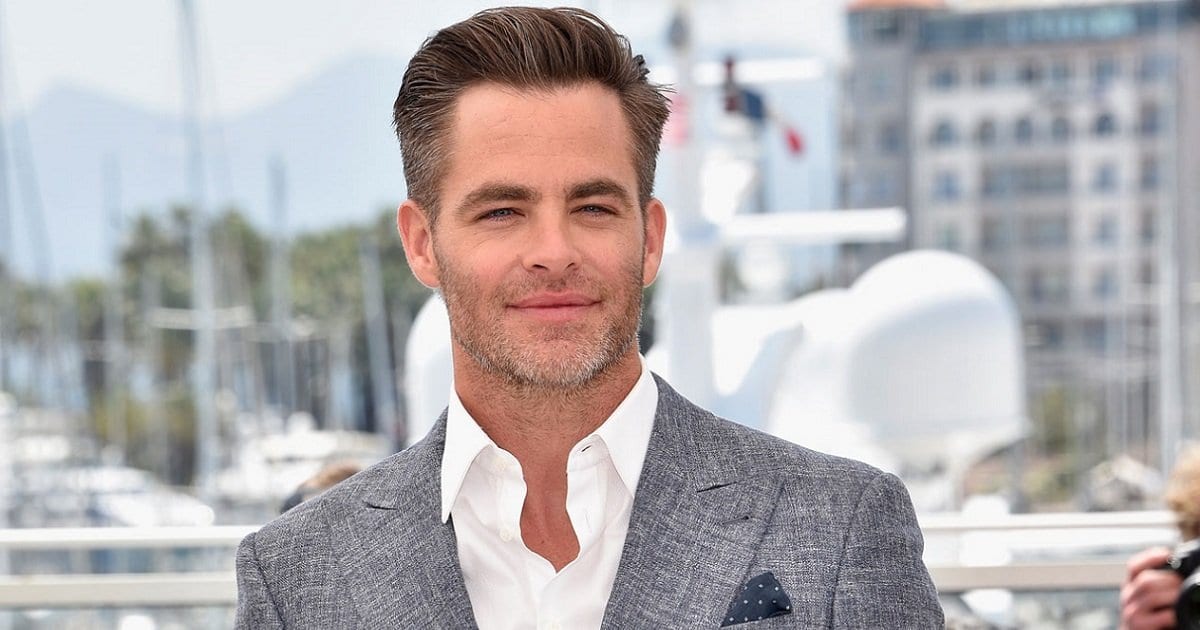 Hollywood is experiencing an identity Chrisis (cue faint laughter and groans). The cinematic world is being overrun by a new breed of humans who go by the name “Chris” or “Christopher.” Lately, the focus has been on the four main Chrises: Chris Pratt, Chris Evans, Chris Hemsworth, and Chris Pine.

But have you ever realized how many Chrises and Christophers there actually are in Hollywood? Apparently there are so many that we decided to dedicate a top 10 list specifically for them. Looks like “Chris”tmas came early for you guys (is anybody laughing yet?).

Chris Rock is a talented comedian, able to lighten even the most serious subjects into something humorous. A lot of people will know him as Marty the zebra in the Madagascar films. However, he has also starred in other raucous comedies like The Longest Yard (2005), Head of State (2003), and Jay and Silent Bob Strike Back (2001). On top of all that, he has also produced numerous TV shows and comedy specials featuring himself and other funny guys. He’s a great comedian that will always make you laugh.

You know we couldn’t leave the great Superman himself off the list. To many of us, Christopher Reeve will always be our Man of Steel. He became even more of one late in life after a horse-riding accident left him paralyzed from the waist down, confining him to a wheelchair. Despite that, he managed to persevere and bring smiles to everyone’s faces. Being the man he was, he even took advantage of his injury by starring in Rear Window (1998), a TV movie which, like the original, features a photographer confined to a wheelchair. He was super until the day he died. Rest in peace, Metropolis Marvel.

Sir Christopher Lee is probably one of the most well-known actors to all the nerds out there (raise your lightsabers for the king!). Known for his roles as Count Dooku in Star Wars: Episode II — Attack of the Clones (2002), Count Dracula in Horror of Dracula (1958), and Saruman in The Lord of the Rings series, he excelled at playing sinister baddies. Don’t let his almost haughty dignified appearance fool you — he played the kooky characters the best, such as in Alice in Wonderland (2010) and Charlie and the Chocolate Factory (2005). Not to mention he was knighted by the His Royal Highness Prince Charles himself, which is a magnificent honor. Sadly, he passed away in 2015, but his legacy lives on.

Christopher Walken — the man who’s spawned a thousand impressions with his unique Queens accent. Unlike many actors and actresses, he’s managed to stay pretty relevant throughout his career. He initially took off with his role as Nick in The Deer Hunter (1978) and as Duane Hall in Annie Hall (1977). Since then, he’s been in classics and blockbusters like Catch Me If You Can (2002), Hairspray (2007), and Pulp Fiction (1994). Most recently, he has lent his voice to King Louie in The Jungle Book (2016) and the comedic role of Dr. Walter Tinkler in Father Figures (2017). However, my favorite performance of his is will always be in this particular Fatboy Slim music video:

While he endeared himself to millions of Americans in 1965 as Captain Von Trapp in The Sound of Music alongside Julie Andrews, Christopher Plummer is an amazing actor in any role you throw him in. One of his more well-known roles is in fact a dying gay man in the comedy-drama Beginners (2010). Plummer often costars with Russell Crowe, providing the perfect complement to Crowe’s dramatic roles with an equally well-done performance. He also does fantastic voice work in the Disney movie, Up (2009), further endearing him to us.

Great Scott! You knew Christopher Lloyd had to be on this list. He has the hair and the personality for crazy roles, like Judge Doom in Who Framed Roger Rabbit? (1988) and Professor Plum in Clue (1985). His voice acting is top-notch as well, lending his voice to movies such as Anastasia (1997) and TV shows like Cyberchase (2002-2015), which blew my mind when I found that out as a kid. But, no matter how many roles he plays, he will always be Dr. Emmett Brown from Back to the Future (1985) to us.

Chris Pine — AKA Captain James T. Kirk — rounds out the bottom of the top four Chrises in Hollywood. I was first introduced to Pine in the same way as most young girls: in The Princess Diaries 2: Royal Engagement (2004) as the heartthrob Nicholas Devereaux. Disney knows exactly what roles to put Pine in for him to flourish, such as in Into the Woods (2014) and A Wrinkle in Time (2018). Pine is also well-suited for action roles, such as his characters in Jack Ryan: Shadow Recruit (2014) and Wonder Woman (2017). And he’s one of the few men who can actually rock the chinstrap beard.

Marvel has a thing for hiring attractive Chrises, and I don’t think anyone has a problem with that. Before Chris Evans became known as Captain America to the world, he played the poorly written Johnny Storm in Fantastic Four (2005). While not a great start to his superhero career, it did reveal that Evans and his gargantuan biceps would perform well with a much stronger character. He also displays a sense of sarcastic comedy in his role in Not Another Teen Movie (2001). But the world will always know Evans as the man who personifies all the values that America stands for. Here’s hoping he’ll survive next week!

Do you think when anyone shouts “Chris” on the Infinity War (2018) set that ten heads turn all at once? Chris Hemsworth will always be known as Thor to this generation, rocking the long blonde locks as well as the rugged, close-cropped look. Not to mention he’s got some of the best abs in Australia. Hemsworth is a phenomenal actor, able to perform difficult stunts, amusing comedic bits, and as a hardcore action hero who can take on intergalactic enemies as well as North Koreans and assorted terrorists. And he has a smile that could rival even a puppy’s cuteness.

At this point, who doesn’t love Chris Pratt? He’s shown himself to be adept at playing a comedic character, an action hero, and even dramatic roles. It’s hard not to admire a man who keeps his sense of humor after losing sixty pounds and buffing up for a role. He has quite a genuine personality as well, caring deeply about his family and never letting the fame get to his head. Tom Holland mentioned it was hard to work with him on the set of Infinity War because he kept making the young Spider-Man laugh. He earns his place on this list as the best Chris — both as an actor and as a human.

Thanks for reading! What are your thoughts on the top 10 Chrises of Hollywood?  Comment down below!

[…] pops in to carry certain moments, then disappears. With the star power of Denzel Washington, Chris Pine, and Rosario Dawson, there isn’t much of a need for a robust supporting cast. However, the […]

Who knew there were that many famous actors named Chris? Another quirky and entertaining list ala Tuttle.

Haha that’s what I’m here for!

How the heck is Chrisopher Lee not top of the list?

Mostly because when people think of actors named Chris, he usually isn’t one of the first thought of

I was waiting for Christopher Lloyd! Glad to see he’s the highest of the non-four-famous-Chrises!

Love this list and your #1 pick! It’s hard to imagine that the Chris Pratt I knew from early episodes of Parks & Rec is now one of Hollywood’s biggest action stars.

OK, I know this comment is going to make me seem really, really old but I think there’s kind of a disconnect between “best” as it applies to someone like Christopher Walken and “best” as it applies to Chris Pratt. I love Chris Pratt. Really, I’d happily be stranded on a desert island with him or #2 or #3 on your list. But in terms of being the “best” actor, I’d have to put Walken way higher (even though I would definitely NOT want to be stranded on a desert island with him). And Chris Cooper would definitely make the list, probably Top 5. But thanks for making the list — definitely fun to discuss!

I couldn’t agree this comment more. Chris Pratt’s extremely attractive, but I was shocked to him listed as number one on this list and Walken ranked so low. I was equally as shocked to see Chris Evans ranked higher than Chris Pine. I think Pine is a stronger actor than Evans, but to each his own. Not my site or list.

I would have definitely had Chris Cooper make the Top Ten…I mean, he did win an Oscar after all. So did Walken and Plummer who couldn’t seem to crack the top 5. Not that it’s all about Oscars but Oscar wins seem to be a pretty good indicator of acting talent…and my name’s Chris too, so I particularly enjoyed this list.

Does Christoph Waltz count or nope? Because he’d be number 1 for me if he was a valid entry

I considered him, but I figured Christoph was just too unique a name to count. Love his acting though!

Quentin Tarantino Wants You to Love Your Movie...