Before any comic book nerds come at me telling me about the numerous superhero universes there are, please keep in mind that the last time I read something was in elementary school. I no longer know how to read. Please don’t make me read anymore.

Anyway, there are basically two big superhero universes that anyone cares about: Marvel and DC. But what if there was a third one? And I don’t mean what if we just choose another comic book universe to adapt to the big screen. I mean, what if we started a brand-new unique universe with unique superheroes that no one had ever heard of before? Ladies and gentlemen, I present to you my idea: the Tutka superhero universe. Yes, that is a mash-up of my initials. I’m very original. Applaud me.

Let me introduce you to some of the elements of my universe.

Superheroes Who Can Turn Into Sharks

I don’t know if maybe I’m just not looking hard enough or if I’m just forgetting a really popular superhero, but I feel like there aren’t a lot of superheroes that can turn into other animals (Jacob Black does not count). Obviously, I’m not going to strictly limit my superheroes to sharks, but wouldn’t it be awesome to see a superhero turn into a shark mid-battle? I think it would.

The Tutka universe would have a superhero named Shifty (or something cooler but this was my first idea) who could shapeshift into any animal that he or she can think of. So, when a villain decides to hail a helicopter and fly off, our hero would turn into an eagle and swoop after the dastardly fiend. Think you can escape to your underground hideaway? Here comes Shifty the Mole down to roost you out of your bunker with his or her poor eyesight and wicked claws.

Honestly, I’m surprised Marvel hasn’t done a superhero like this yet (I’m talking about in the movies, you comic book nerds). Do you know how many jokes could be made? Do you know how many times you could have superheros turn into puppies? That would increase the audience by at least another million. Just saying.

I’m So Sick of New York

We get it — New York is a big city and all the aliens want to attack it. But don’t you think people would eventually just move away if their city was destroyed nearly every other week? Between Tony Stark throwing the Hulk through buildings and Ebony Maw throwing glass and debris at people, these poor New Yorkers can’t catch a break.

That’s why the Tutka universe will no longer focus on New York. Instead, it will focus on the setting of everyone’s nightmares: middle-class Midwest America. If the aliens were smarter, they’d realize that the best part of America lies in that juicy center where the children of the corn live. Without the Midwest, America is nothing but a bunch of city slickers who don’t know a horse from a mule.

Think about the possibilities. Alien invasions in rural Texas. Supervillains creating supersuits out of prairie grass and hay bales (their secret power is mind control over cows). Hillbilly villains riding their tricked-out tractors through the streets with their death rays that they built in their high school science class and just found in their garage last week. Villains could wipe out half of America if they simply focused on the right part of the country.

My universe would take a bit of creative license when it comes to picking out superheroes. For example, the Queen of England would be a superhero in the Tutka universe. Her superpowers are ninja assassin skills and an ability to telepathically communicate with Corgis. Abraham Lincoln, in addition to being a vampire, is able to talk for three hours without taking a breath and the uncanny ability to heal from all wounds (meaning he is immortal, was never assassinated, and still roams the Tutka universe in various disguises).

Cryptids would also be superheroes. Bigfoot is actually a superhero who only reveals himself to those who litter on hiking trails; he handcuffs them to the nearest tree until the park rangers come (it’s a well-kept park ranger secret). The Loch Ness Monster is an undercover superhero who fights off sea predators, which is why sailors are able to cross the oceans without issue.

Every time I watch a Marvel or DC movie, I found myself stressing about who will clean all the mess up. Half the time, it’s not even the villain who creates most of the damage — it’s the heroes themselves. While both Marvel and Disney’s The Incredibles (2004) both mention this point, I still feel like it’s a huge issue that’s never fully addressed in superhero universes.

So, in the Tutka universe, collateral damage is illegal. Anyone who destroys a building in the middle of a fight will instantly be killed by a powerful dragon who watches over all superhero vs. supervillain battles. Not only is that the policy for supervillains, it is also the policy for superheroes. If anybody in a battle so much as bumps into someone’s house while they’re just trying to have a nice meal of ramen noodles, they will instantly die and their death will be replayed on the large flat screen that the dragon carries around.

As much as I love Tony Stark, you can’t just throw money at the problem and hope it goes away. You have to resort to drastic measures such as insta-death dragons to control your heroes.

All battles would be filmed live by the omniscient dragon and later rebroadcast on the nightly news. They would also be free to view on YouTube so you could see your favorite superhero (or villain) kicking some serious butt. Basically, you get to live in a superhero movie without the fear that your house could get demolished in a fight. 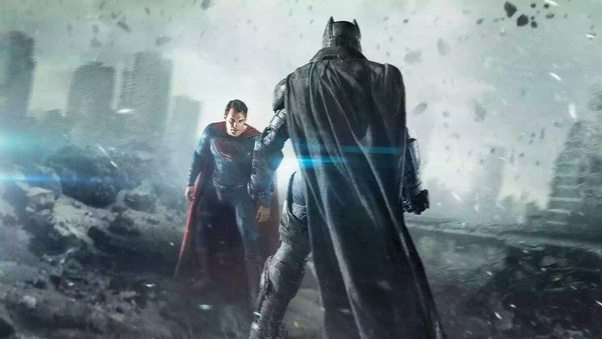 Live footage would include all the greatest perks you can get in a great football game, such as instant replay, commentary by well-known faces, the ability to draw on the screen to point out certain heroes or moves, sound effects, and assorted camera angles to watch the action from the best possible view. Mr. Omniscient Dragon, of course, would have little dragons to help him with this hefty task.

I think this would be beneficial to society and I believe it alone makes my universe superior to all other superhero universes.

The Tutka Universe is Superior

There is no discussion or argument here. My universe has shapeshifting superheroes who can turn into fluffy bunnies if they truly wanted to. Each fight is broadcast to the public and there is instant replay. The Midwest finally bears the weight of some of the alien and supervillain attacks so New York can take a break for a while. Plus, the people have no fear that their house will fall victim to the next superhero fight. I don’t see a reason why my universe isn’t superior to Marvel or DC, except for the fact that it doesn’t have a movie or comic book.

Thank you for reading! What are you thoughts on the Tutka superhero universe? Comment down below!

Er…what the heck? Can this actually be made into a thing? It sounds brilliant. Tutka Universe has so many things it could offer with so much more potential.