Analyzing the Death of Hal from ‘2001: A Space Odyssey’ 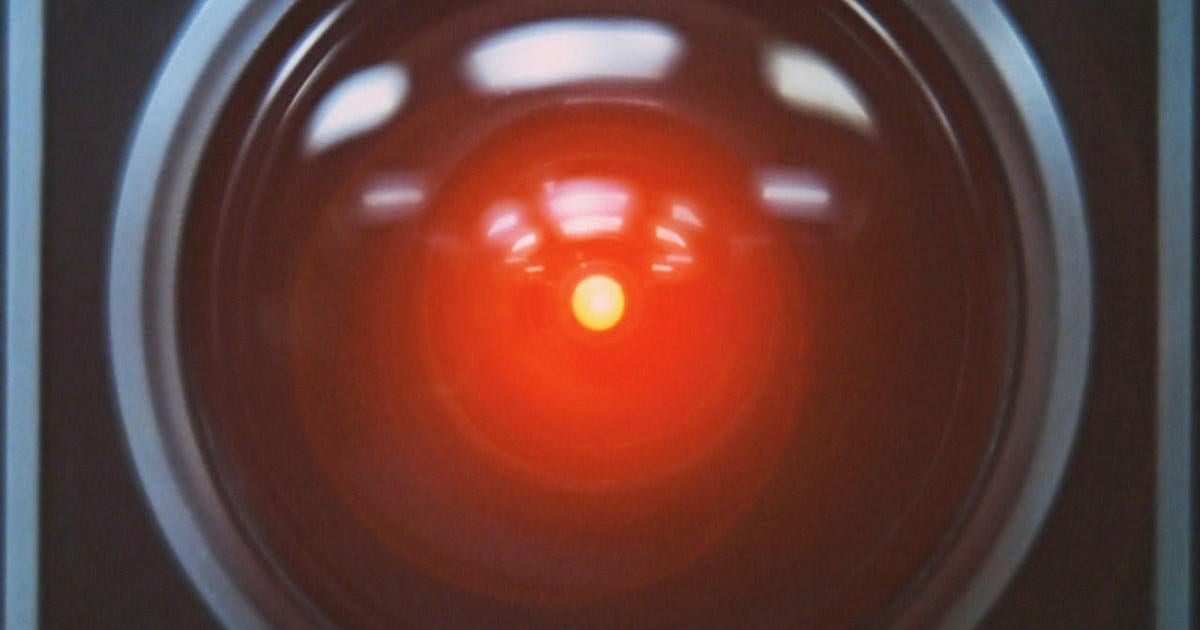 Most science fiction fans are familiar with this famous scene: astronaut Dave Bowman propels himself into an emergency chamber to board his ship, Discovery One. The advanced, and conscious, 9000 computer Hal has killed every crew member but Bowman, but has failed to lock out the one survivor. Bowman climbs into the ship’s “nervous system,” and despite the monotone pleas of his shipmate, he carefully, earnestly, disconnects Hal.

Even though I didn’t find Stanley Kubrick’s sci fi flick from 1968, 2001: A Space Odyssey (which turns 50 this year), demonstratively emotive, Hal’s disconnection made me feel sorry for the computer and a little bitter toward the victor, and it left me to wonder — what was the larger meaning behind what happened?

I had decided to delve into the film, and Arthur C. Clarke’s novel of the same name, to begin building an understanding of the science fiction genre, which I admittedly know little about. Sure I was exposed to campy 50s and 60s sci-fi on TCM, but they didn’t demand much of my attention. And when the network showed the occasional trailer showcasing a man-ape triumphantly tossing a bone in the air, along with images of shuttles and cylindrical spaceships moving glacially to the The Blue Danube, it never occurred to me to watch such an unusually slow-paced film. To do so seemed like an eye-wrenching test of my patience. When I finally hunkered down and watched it, I found the film intriguing — even hypnotizing.

Most interesting was the hint cynicism of the story, though it’s not detected as easily in the film as it is in the book. Still, both versions, developed simultaneously, are so inextricably linked that it’s difficult not to read Clarke’s words in Kubrick’s imagery. Thus I looked to the book as if it were akin to a walkthrough. Though my thoughts on the film are not complete (what analysis of an ambiguous film ever is?) I became partial to the idea that Hal, as well as the crew he killed, were the victims of a cold, albeit guided, evolutionary process. 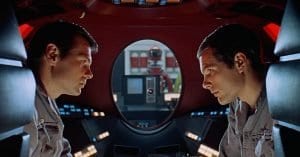 The movie opens on a barren landscape inhabited by man-apes. The man-apes go about their ape business until they spot a black monolith appear on the desiccated land. The monolith is studying them, assessing their intelligence. The monolith seems to consider them worthy of evolutionary advancement, so it showers them with a mysterious energy. This leads to the iconic scene where the man-ape, Moon Watcher, sees the bony remains of a pig and realizes that he can become a predator, like the leopard that killed it. Eventually, they realize they can not only conquer the fauna around them, but also other man-apes.

We transition from prehistoric times to the space age where astronauts have made it to the moon and beyond. In the crater Clavius, humans excavate a black monolith, but they try to keep its discovery a secret. A radio sent from the monolith to Jupiter prompts an investigative mission to the planet on the Discovery One spaceship (without its main human crew, Dave Bowman and Frank Poole knowing the true nature of the mission).

The other crew member, Hal, is a human-like computer that’s supposedly unable to make a mistake. Yet he incorrectly tells Bowman that the AE-35 unit will fail. Poole replaces the unit, but upon further investigation they find nothing wrong with the previous AE-35. When confronted, Hal’s best excuse is that “human error” must be the cause of the error.

Leading up to Hal’s disconnection scene, Dave Bowman and Frank Poole covertly discuss their plan for Hal after the computer mistakenly detects a failure in the ship’s A-35 unit — the unit that keeps Discovery in touch with Earth from Jupiter’s orbit. Despite their efforts to keep Hal from listening in, he reads the lips of his crewmates and reacts with fear, and a plan to defend himself at the cost of his shipmates’ lives.

After Bowman systematically plucks away at Hal’s inner workings, Bowman is selected by the mysterious alien race for advancement. After a mind-bending star gate sequence, he settles in a neoclassical room — designed by the aliens as a kind of zoo. There he stays until he dies and is reborn into a star child. He approaches Earth in his new form. 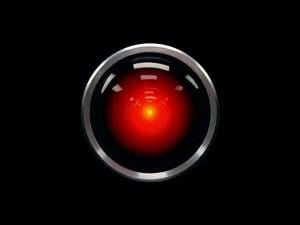 As I watched Hal fight against the crew, I easily got caught up in the belief that his shipmates wanted to kill him from the start. Yet the book offers a different angle. It suggests that Hal has a possible irrational fear of the unknown. Hal has never known sleep, Clarke explains, therefore being switched off means death to him. From this angle, Hal looks like an irrational, pre-space age human in contrast with the self-contained crew that surround him.

This angle also tells us that maybe humans failed to do what the mysterious aliens were doing — spurring progress in advanced forms of life. Only in the case of humans, they direct the evolution of artificial intelligence.

2001 is, in many ways, quite Darwinian in its detached, yet elegant feel. The awesome beauty we see in nature is the result of an incredibly slow and brutally violent process of natural selection. Everything from the iridescent wings of a dragonfly to the copperhead’s venom is a product of this cold, competitive process. As terrible as evolution seems, it produces as many wonders as horrors. It’s this framework that can, perhaps, help shed light on Hal’s unfortunate path. 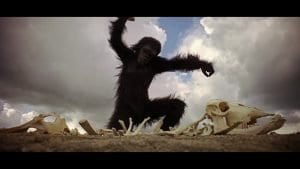 The aliens intervene when humans, or potential humans, get stuck on an evolutionary road with no outlet. The man-apes, divided into two competing tribes, are not directly warring but are in a perpetual stand-off while neither group exploits the full potential of their environmental resources. So the aliens, housed within the black monolith, spur a new evolutionary stage — one that leads to progress and violence.

Bowman appears to be the analog of the man-ape, Moon Watcher, because he shows the most potential. While Hal kills out of his fear of the unknown, Bowman confronts problems coolly and ultimately dominates Hal, thus proving himself ready to ascend beyond the stasis of his world, and the failed experiment of Hal.

The trajectory of the alien’s evolution seems to mirror a similar quest for domination. The novel explains that the alien race existed within their spaceships — the monoliths — but millions of years later, they advanced to a point where they no longer needed ties to matter. The aliens in 2001 seem to be pure energy that can exist within, and manipulate, the very fabric of space.

The Starlight After the Storm

I’m probably not alone in wanting to derive a message from films like 2001, and I’m sure the messages viewers get from it will vary pretty widely. For me, the movie shows a truth that’s difficult, if not impossible, to fully accept: that the only way to achieve enlightenment is by a process that’s brutal and confrontational. Yet the arduous fight results in peace.

The aliens have no bodies of their own to defend, no particular territories to fight for since the whole universe is at their disposal. Simply, they are closer to gods than any other being. They search for knowledge and they help some species evolve closer to their own state of enlightenment and their immunity from death.

Thanks for reading! What impression did Kubrick’s ambiguous classic leave on you? Leave a comment below!

[…] have trained us not to trust AI. We’ll never forget seeing Hal 9000 lay waste to a group of astronauts; Skynet has threatened to destroy humanity so many times, it has […]

I grew up watching 2001: A Space Odyssey and the sequel, 2010. It was years later that I finally read the books. Hal, as a character, has been with me my entire adult life. I know why Bowman feels threatened by Hal, and I sympathize with Bowman’s decision to kill Hal. The scene where Hal is singing the daisy song always makes me cry. Bowman is trying to a)distract Hal from what is happening, and b) be able to tell when Hal is shut down. It’s always been fascinating to me, that AI characters get such an emotional reaction out of other characters, and out of me.