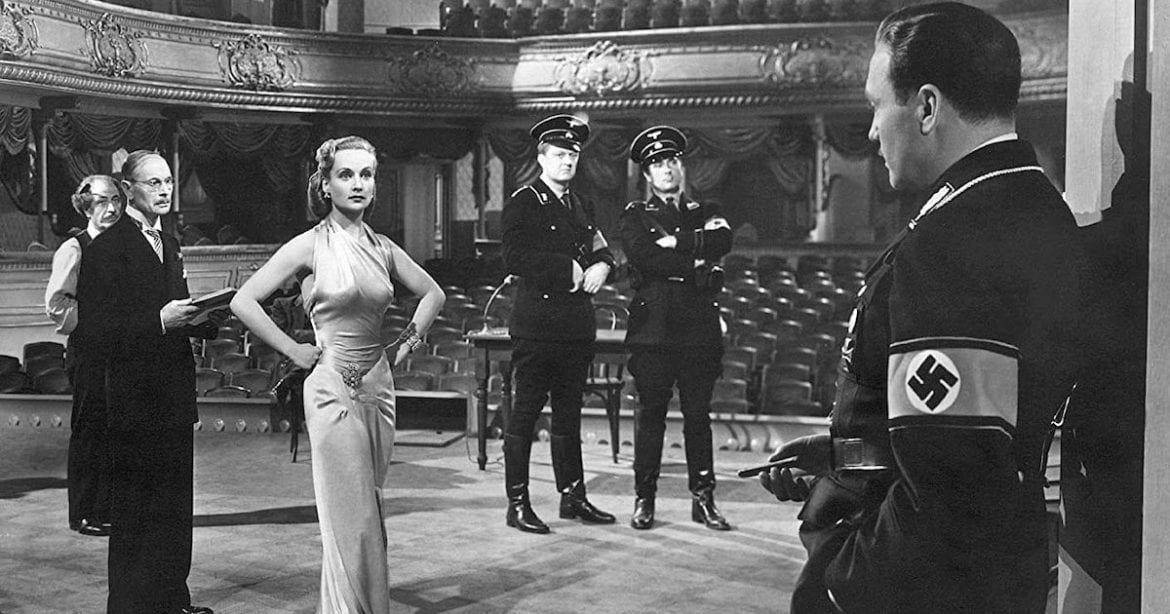 Wartime comedies must walk a fine line. Obviously, they have to be funny. But they also have to fully present in a world in which war is the norm. In 1942, the original To Be or Not to Be premiered. In 1983, the reboot hit theaters. Both told the story of a Polish theater group that is pulled into the resistance to fight against the invading Nazis. The question is, which film is better?

There is a certain something about comedies (especially the romantic comedies), from about the mid-1930s to the mid-1940s. The style of comedy, and a zinginess to the dialogue that is specific to the period. These movies are also short and sweet, unlike some of the comedies that are released today. I’ve had a love affair with these movies for most of my adult life. They are charming, they are funny, and entertaining in the best way possible.

What I like about To Be or Not to Be (1942) is that it is much more than the standard comedy from the era. There is a message, but it is not explicitly a message movie. At the time of its release, as the war raged on and the Nazis continued to exterminate Europe’s Jews, many thought the film to be in poor taste. According to Jack Benny’s 1991 unfinished memoir, one of those people was his father. Meyer Kubelsky, who was horrified at To Be or Not to Be‘s subject, simply walked out during the middle of the movie. Meyer and his wife were both Jewish immigrants from Eastern Europe and were more than aware of what was happening to the loved ones they left behind. After Benny had a conversation with his father, Meyer finally sat down to see the movie and would eventually see it nearly fifty times.

I also love the chemistry between Jack Benny and Carole Lombard. Regardless of genre or narrative, the chemistry between the actors or lack thereof can make or break a film’s success. Their chemistry makes this film. My favorite scene is the opening scene, in which Joseph (Benny) and Maria (Lombard) try to one-up each other. It is hilarious, brilliant, and absolutely perfect. To Be or Not to Be was also Lombard’s last film. She died tragically when the plane she was traveling in crashed in Las Vegas in 1942, killing all aboard.

If nothing else, To Be or Not to Be (1983) is a Mel Brooks film. It has the humor, the slightly off-color and not so politically correct jokes, and the typical perspective that one expects from one of his films. Though Brooks was just acting and not behind the camera, his late and frequent collaborator Thomas Meehan was one of the screenwriters. Playing opposite Brooks was his late wife, Anne Bancroft. Depending on the film and the IRL couple, it can be hit or miss when they play a couple on stage or on screen. But in this film, it works.

If there is one thing that elevates this film from its predecessor, it is the spotlight that is shown on the persecution that members of the LGBTQ community experienced under Nazi control. James “Gypsy” Haake played Sasha, the dresser of Anna Bronski (Anne Bancroft). Forced to wear a pink triangle on his outer garments, it appears that his fate will be that of others in his community. When we talk about the people who were persecuted and killed by the Nazis, we forget that gay men and women were also targeted. Skillfully woven into the narrative, this subtle narrative is a teaching moment without the audience realizing it.

Brooks is not known for shying away from controversial topics. Nor is he known for approaching them gently. One of his earlier and most well-known films is The Producers.  If The Producers is remembered for one thing, it is the song Springtime for Hitler. Though it is gut bustlingly funny, there is no going around the song’s subject or imagery. Though both movies cover the same topic, To Be or Not Be is a little more sensitive while The Producers is akin to a bull in a china shop.

A Forever Timely Topic Told Via Humor and Empathy

Hate and prejudice are as old as humanity. It would be easy as a writer to gloss over the subject and write about something that is not as difficult to grapple with. This topic is by nature, not easily dealt with. But humor has a way of making this subject a little more digestible. Though a joke cannot and should not erase the memory of the millions of innocent people who died under Nazi occupation, it helps to release some of the difficult emotions that come with the era.

One of the poignant sequences in both films is Shylock’s speech from The Merchant of Venice.

I am a Jew. Hath not a Jew eyes? hath not a Jew hands, organs, dimensions, senses, affections, passions? fed with the same food, hurt with the same weapons, subject to the same diseases, healed by the same means, warmed and cooled by the same winter and summer, as a Christian is? If you prick us, do we not bleed? if you tickle us, do we not laugh? if you poison us, do we not die? and if you wrong us, shall we not revenge? If we are like you in the rest, we will resemble you in that. If a Jew wrong a Christian, what is his humility? Revenge. If a Christian wrong a Jew, what should his sufferance be by Christian example? Why, revenge. The villany you teach me, I will execute, and it shall go hard but I will better the instruction.

I won’t give away where the speech is in the film for those who have not seen it. But I will say that is a reminder of those who were persecuted, tortured, and killed by the Nazis simply because of who they were.

The truth is that neither version of To Be or Not to Be dominates the other, as anti-climatic as that might be. Both stand out in their own right as works of genius, and for different reasons. In Hollywood, remakes and reboots are common. But what is uncommon is when a remake/reboot stands on its own two feet while paying proper tribute to its predecessor. We love these films for different reasons, which is why I cannot choose one film over the other. Instead, let’s just sit back, and enjoy two great works of art.

Thank you for reading! What are your thoughts on To Be or Not to Be? Comment down below!

Speer Goes to Hollywood’ Is an Intriguing Documentary...