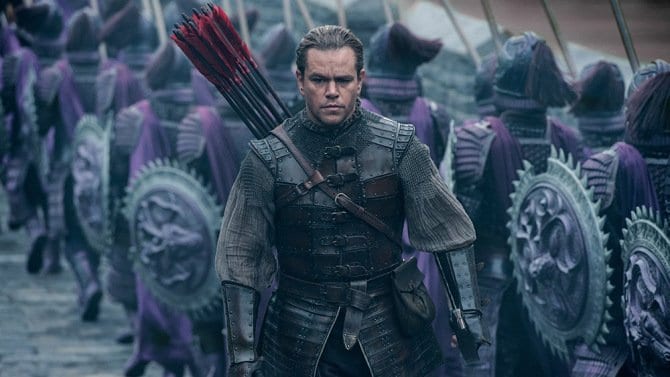 What was the reason for the construction of the Great Wall of China?  According to this week’s new release, The Great Wall, it was to keep out a hoard of monsters attempting to attack China and then the rest of the world!  With such a ridiculous premise,  I went to the theater hoping for some absurd fun to start a weekend full of new releases.  The following review will be spoiler free.

The Great Wall is directed by Yimou Zhang and stars Matt Damon, Pedro Pascal, and Tian Jing.  We follow William Garin (Damon) as the leader of group of European explorers in search of black powder.  After a bizarre attack from an unknown creature, the only men left in the group are William and Pero (Pascal).  Shortly after, the group is ambushed by a group of Chinese military soldiers that capture and imprison them.  Our leads then get wrapped up in a battle with the army as they take on a horde of the creatures they saw earlier.  In order to defend the land from utter destruction, William learns that he must let go of his past.

The first trailer for the movie unfortunately led to some unnecessary backlash towards the movie.  The trailer failed to explain that Matt Damon was a Westerner traveling to the region in search of black powder, so when the trailer showed Damon in action along with many Chinese actors, many people cried that the film had undergone some whitewashing in order to add some star power to the movie.

Despite later promotional material fixing this issue, none of the trailers have struck a nerve with me which is a shame since this is the first American released movie for acclaimed Chinese director Yimou Zhang.  Nominated for multiple Oscars for best foreign language film, Zhang has certainly built a fan base overseas, leading me to believe this film will certainly make back its $150 million budget and then some.  However, whether the movie will be enjoyed in the good ol’ U.S of A remains to be seen.

Unfortunately for prospects of the domestic box office for The Great Wall, I don’t think this movie will do too well due to its poor quality.

Yimou Zhang is seen as a visionary director, and that is definitely on display during the major battles in The Great Wall.  The costume design of the warriors works really well for the actions set pieces because each different squadron wears different colored armor, making the screen full of color as soldiers dressed in all different colors fly all over the screen amidst giant green monsters and fireballs falling from the sky.  Although the CGI of the monsters can easily take you out of the movie at times,  the action, for the most part, keeps you somewhat invested in the movie until the action later becomes stale from an overabundance of terrible CGI and stupidity.

However, really nothing else is all that compelling.  There is practically zero character backstory and the little development we get from the characters throughout the film feels incredibly forced and contrived.  Other than a dump of exposition in a single scene that gives a thickly veiled explanation of his background, there’s no reason to root for Matt Damon’s character.  While Damon isn’t whitewashing a Chinese character, his inclusion in the movie felt incredibly forced and an obvious plot device to attract a larger American audience to the theater.  You’re much more likely to care for the Chinese characters than any of the Westerners in the movie, making The Great Wall feel incredibly bland while doing more to bog down the movie than to add anything of substance to it.

Willem Dafoe is in this movie for some reason, and he’s completely wasted as a side character that could have been played by any actor.  Dafoe and Pedro Pascal have a side plot together that has zero consequence to the movie and simply pads the run time.  The film tries to add different angles to film to give it a more rewarding, rich experience, but these attempts fall very, very flat.  One in particular, which includes a younger soldier and his redemption, had me laughing in the theater.

image via The Perfect Man

I can’t really recommend this movie for anything besides the visuals.  The monsters have a dumb “twist” to them that we’ve seen before in movies where there’s an absurdly large opposing army.  You would think that a film with such a ridiculous premise would at least entertain even if it’s not the best constructed piece of art, but The Great Wall does more to bore than excite.  The one thing I was sure about going into this film was that it would be a crazy, fast-paced time, but I was sorely mistaken.

So The Great Wall may be a visual treat, but it doesn’t do much else.  It gets a D+.  The movie is short enough where you might enjoy it a little when it airs on TV in a year to two, but I can’t recommend that you see The Great Wall in theaters.  Save your money for March which has a ton of big movies coming out!

Thanks for reading!  Have you seen The Great Wall?  Did you think the movie was going to be bad?  Comment down below with your thoughts!

If you enjoyed this article, be sure to subscribe to MovieBabble via email on the side bar to the right to stay up to date on new posts.

What movie topic should I review next?  Whether it be old or new, the choice is up to you!

Hi! I wrote an article on the movie as well and it seems we agreed on a lot of points. Great article. I’m definitely following.

I felt pretty much the same way, though I was impressed with how Matt Damon fit into the story. I thought it was white washing but his reasons for being there worked. Unfortunately not a lot else did

Lol you got that right. Apparently this movie was key in attempting to expand Chinese cinema moving forward, looks like it failed lol

Thanks for the review. I was super skeptical about this movie. After I saw that it had dragons or whatever in it, I was so confused haha

Lol it definitely takes liberties with the source material!

I have not seen this film yet, but I still plan on seeing it. I have a high regard for anything Asian, so even though my expectations for it will be low, I still think I might get a kick out of this one. Great post though ?

You never know! You might end up loving it!

amen. So frickin stoked for march.

Logan is only two weeks away!

I’m still kind of interested in seeing this, though it doesn’t sound like it will be exactly compelling viewing. Thanks for shairng your thoughts.

If you want to see it then by all means go out and see it! Film’s subjective you might really enjoy it!

Great review and thank you so much for sharing! :)
I didn’t have a whole lot of interest in going to see this, but I was definitely curious to hear what people thought of it. I wish they would have included at least a nod to the black powder thing in the first trailer. It would have made a lot more sense as to why Matt Damon was the lead. The trailer missed a few other marks for me as well, like when it goes into detail about the wall itself and then asks “What were they trying to keep out?” I remember just thinking to myself “Um, the Mongols?” lol
I’m all for historical fiction, don’t get me wrong, I just felt they should have put it in a way like, “history tells us that the wall was built to keep invading forces out, but what about the enemies history doesn’t mention?” or something to that effect. Maybe I’m just nitpicking though because I like history so much. :P
I had no idea Willem Dafoe was going to be in this film. It’s really too bad that they apparently wasted his character. I like Pedro Pascal, too, but I think I will heed your advice and dodge this one while it’s playing in the cinemas. ;)
I am however going to the theater tonight to see A Cure for Wellness. I’ve been really excited for this one since I first saw the trailer. :D

I have my hope for A Cure For Wellness I’m hoping it’s really good!