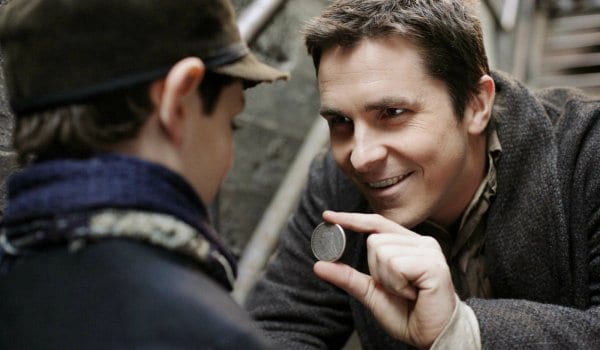 As the power of the almighty Netflix continues to grow, great films have consistently been added to be viewed by countless college students who are avoiding studying for their upcoming finals.  The Prestige, which was recently added on April 21st, is another superior film at Netflix’s disposal.  Directed by Christopher Nolan, the film has more twists and turns than a standard Shyamalan film.  But has it stood the test of time?  The following The Prestige review will be spoiler free.

The Prestige is directed by the aforementioned Christopher Nolan and stars a remarkable cast including Christian Bale, Hugh Jackman, Scarlett Johansson, and Michael Caine.  We follow a group of magicians in 1878 led by Robert Angier (Jackman) and Alfred Borden (Bale).  After a serious tragedy occurs in the middle of an act, our two leads become at odds with each other.  This leads to a battle between the two men that quickly becomes hostile.  As the two battle to come up with the best magic trick imaginable, it leads them both into a state of obsession as they turn to more dangerous methods. image via No Film School

For those unaware, The Prestige took part in the fairly regular trend in which rival studios are releasing similar films around the same time of the year.  The Prestige, which was released on October 20th, 2006, followed The Illusionist, another magician movie, which came out in September of the same year.  In most cases, because each studio is trying to beat the other one to the punch by getting their movie released first, the final products of each film are less than stellar due to a rushed production stage.  However, luckily for each film in this instance, they were both met with predominantly positive reviews as each is certified fresh on Rotten Tomatoes.

But what distinguishes The Prestige from The Illusionist?  Both films have quality casts with similar critiques.  It would seem that the films are destined to be linked together.

In my humble opinion, the difference comes down to one name: Christopher Nolan.  No further analysis is needed. 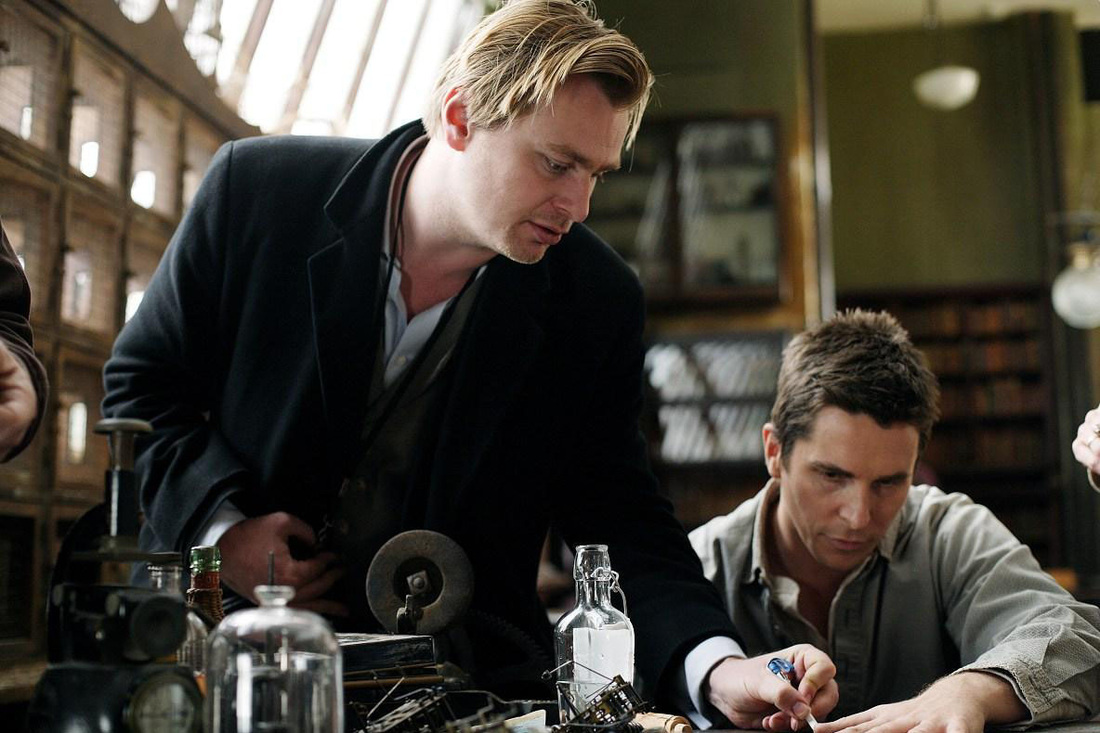 But in all seriousness, The Prestige has some serious issues.  From a plot that requires multiple views to understand to annoying performances, The Prestige certainly ranks as the worst of Nolan’s films.

Just kidding!  This movie is awesome!  Moving on!

From the moment the film starts, you realize that Nolan’s command of dialogue is absolutely on point.  Not only do the conversations between each character sizzle with intrigue, there’s a clear symmetry as well as a cyclical element to it that really works.  The Prestige uses the same pieces of dialogue multiple times throughout the film in ensuing conversations between characters.  However, the same lines of dialogue take on a new meaning and feeling as events unfold in the film, giving each line an expanded purpose within the context of the story.  Nolan uses this technique a few times, and works better and better with every repeat viewing.

There’s also a firm grasp on the plot which is more crucial than usual to the success of The Prestige.  Without a careful setup of the conflict between Robert Angier and Alfred Borden, The Prestige does not work in the slightest.  Many directors would skip over a lot of little details of how the relationship crumbled into pieces in order to skip to the magicians trying to best the other with a great new trick.

However, Nolan takes his time with the relationship between the two magicians, showing how they butt heads and how it eventually boils over into a war where unspeakable acts are committed.  Because Nolan takes his time to slowly set up the relationship between the two men (and those who are close to the main characters), it gives The Prestige an emotional punch that would not be there otherwise.

There’s a growing sentiment in the film industry that Nolan’s film-making is similar to Stanley Kubrick in that his films are masterful from a technical perspective but lack an emotional pull, leaving the film somewhat cold and calculated.  From the discussion above, you can tell that I disagree mightily with this thought.  The Prestige does not work without an emotional aspect to the story line since the film relies on the relationships crafted within the story.  There are some really tender moments between Borden and his child as well as Angier and his wife that bring a smile to your face. However, the reason that this The Prestige review is so positive (due to the trait that I admire most in movies) is that it’s really, really weird.  No spoilers here, but as the plot unfolds, The Prestige turns into a strange film that blends the idea of magic with true science.  This leads to an absolutely bonkers final act that surprisingly works on all fronts.

Many films with a solid budget invested in them shy away from getting completely bizarre.  This leads a lot of strange ideas coming to fruition in low budget films.  The problem with this is that we can’t see these events occur on a large scale.

If you go back and look at your favorite films, you’ll realize that a lot of them are inherently weird.  Creativity should never be stifled, or else we’ll just get a bunch of safe movies that we forget about as soon as they leave theaters.  I will always appreciate Nolan for having the guts to a risk with The Prestige.

Plus, the film has David Bowie playing Nikola Tesla, which is just fantastic. 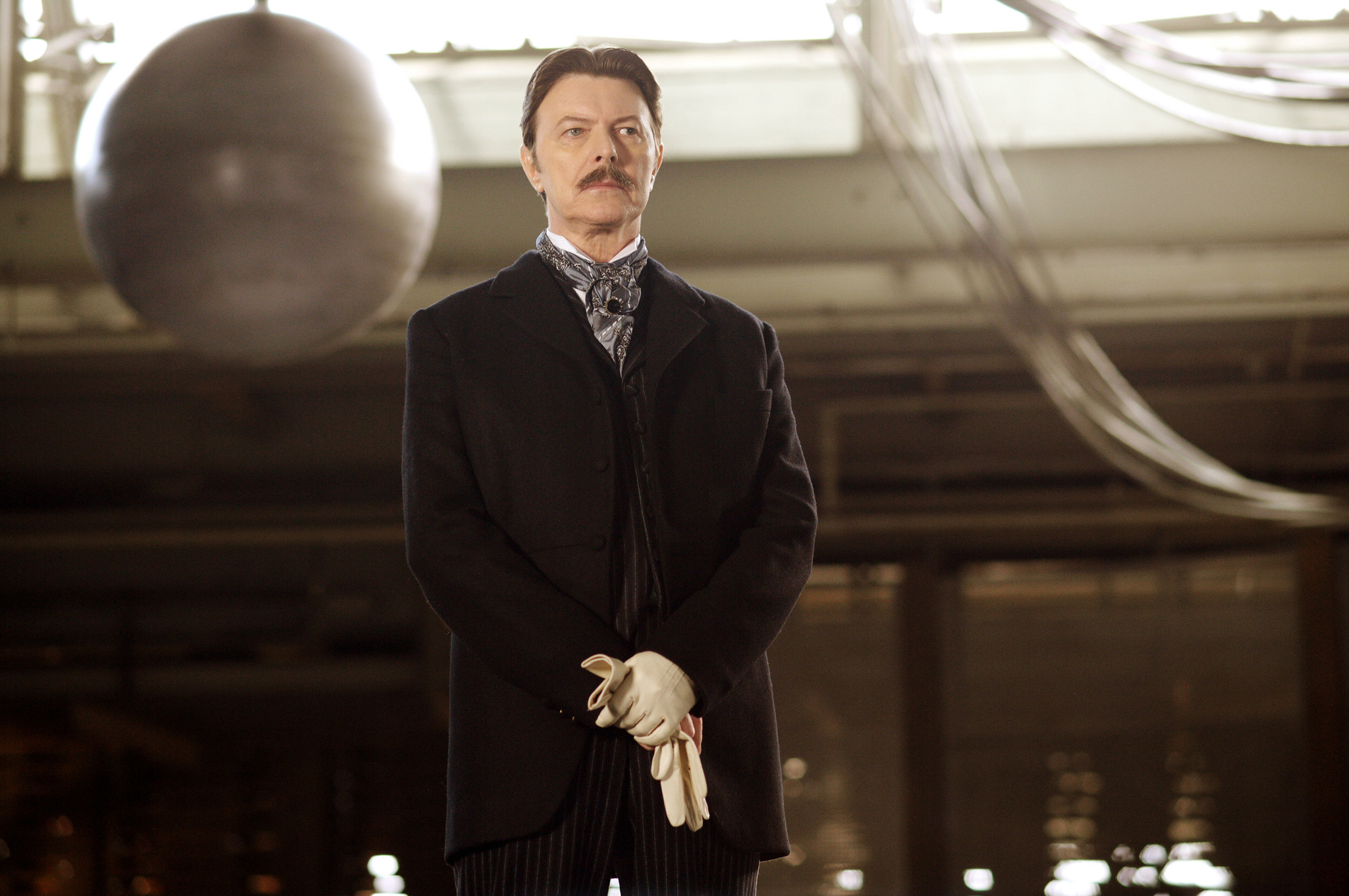 As a whole, The Prestige is an engrossing period piece that remains incredibly coherent despite its ever twisting narrative.  It sits as one of my personal favorite films of all-time (you can read that list in its entirety here) and gets better with every repeat viewing.  It gets an A+.  If you haven’t seen The Prestige yet then, well, what are you waiting for?  Scram!  Go watch it now!  Hasn’t this The Prestige review swayed you enough already?

Thanks for reading my The Prestige review!  Have you seen The Prestige?  Comment down below with your thoughts to keep the conversation going!

If you enjoyed this article, please subscribe to MovieBabble via email.

I love the prestige it’s a brilliant film, definitely up there in my top favourites. Even more so because of David Bowie (slight Bowie obsession here ?)

Lol he’s do good in it! Everyone loves Nolan for the Dark Knight, but this might be his best film!

Believe it or not, it is my favourite Nolan’s movie. I was completely mesmerised by it and watched it several times already!

Good to know! It’s certainly worth your time!

Haven’t seen The Prestige yet but your review convinced me! I will sit down with my family and watch it as soon as my sister’s finals are over. On a different note though, have you seen Kingsman? If so what do you think about the new one that’s coming out soon?

I LOOOOOOOVE Kingsman! Super excited for the sequel! Could be pretty great!

Yeah, too bad they moved the release date from June to September though.

On the bright side, it’ll have less competition and make more money which will make a third movie all the more likely!

The Prestige is truly a great movie. Awesome review.

I just re-watched this last night on Netflix — saw it first in the theater when it came out. Totally agree with the A+ rating!

It’s so great! One of my favorite endings!

Action Park: The Dangerous Amusement Park that Got...