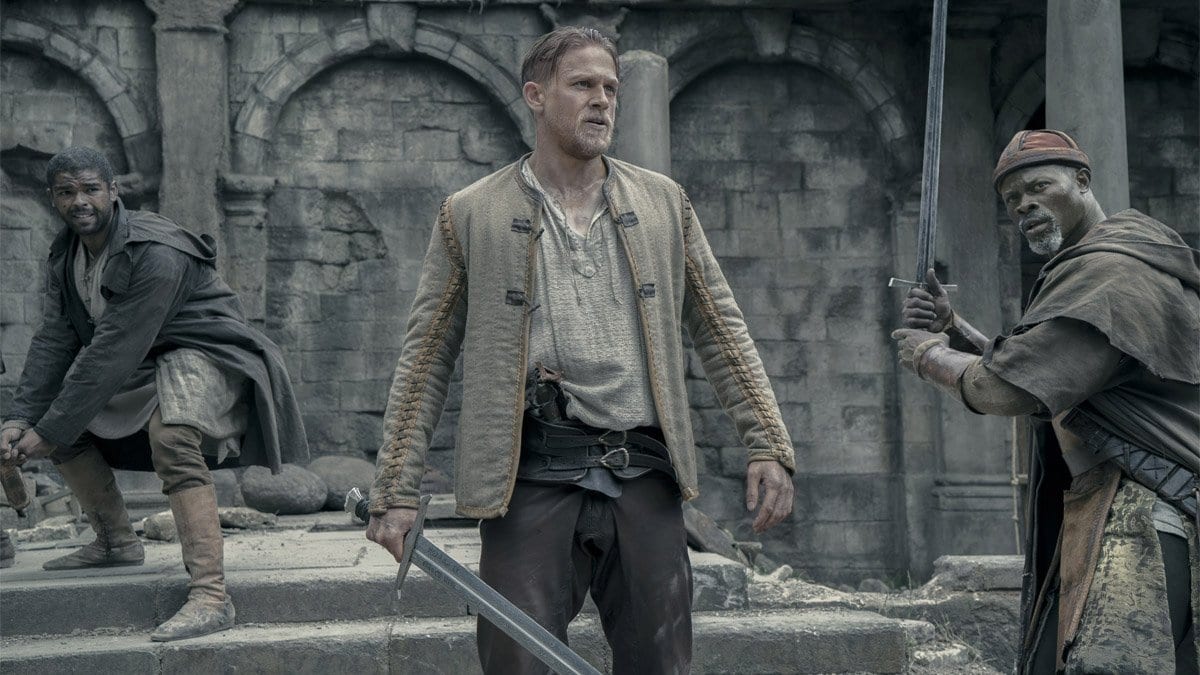 With the summer movie season now in full swing, the next big budget film to hit theaters is King Arthur: Legend of the Sword.  Guy Ritchie’s new take on the famous story is sure to add a little life to the medieval tale, but could the film be more than just a flash in the pan?  The following review will be spoiler free.

King Arthur: Legend of the Sword is directed by Guy Ritchie and stars Charlie Hunnam and Jude Law in lead roles along with Eric Bana and Djimon Hounsou.  The film is an updated look at the classic tale of a boy named Arthur who is cast into obscurity after his uncle, Vortigern (Law), kills his father (Bana) after organizing a coup on his kingship.  Now in power, Vortigern calls out for all young men to come forward and attempt to remove the sword called Excalibur from the stone that it’s stuck within.  Arthur, who does not desire power, pulls the sword from the stone, showing his royal lineage.  In the face of resistance from Vortigern and his army, Arthur must now face what his legacy holds.

Guy Ritchie is mostly known for his fast edited, quick -paced British action-comedies such as Snatch and Lock, Stock, and Two Smoking Barrels.  I was curious to see how this distinct style would translate to a very classic story.  No matter the type of story, Ritchie’s style always seems to bleed into the film’s inter-workings.

But would this improve the story of King Arthur?  The trailers seemed to point towards no.  But hey, I’ve certainly been wrong before.

As I suspected, your level of enjoyment of King Arthur: Legend of the Sword largely depends on your ability to adapt to Ritchie’s style.  Before you see this movie, you must be aware that this is not your father’s King Arthur.  Charlie Hunnam’s Arthur struts around to the beat of a catchy, sometimes rock-infused beat.  There’s incredibly quick and snappy dialogue that’s mixed in with nonlinear scene presentation that occasionally yields to freeze frames and rewinds.  Even most of the action feels like a video game when its not in the middle of another snappy montage.

Should this style be utilized in a movie about King Arthur?  Probably not.  But is it entertaining?  It sure is.

For better or for worse, Guy Ritchie’s fingerprints are all over this film.  There’s one scene in particular that rivals some of his best use of dialogue and quick editing.  He takes what could be very mundane sequences and turns them into some of the more entertaining moments in the film.

This style may bother those who are looking for an epic medieval tale, but this critic certainly found it to be mostly amusing.

Both Charlie Hunnam and Jude Law buy into this style, giving solid performances in prominent roles.

Jude Law shines in the time that the film gives him.  He has a few great lines of dialogue that get to the core of what villains feel as they accumulate more power.  He even has a moment that hearkens back to a famous moment in Reservoir Dogs.  You’ll know it when you see it.

Charlie Hunnam has appeared a little wooden in some of his past films, most notably in Pacific Rim.  However, luckily for us, Hunnam was very charismatic in the lead role acting as a suave born king.  Should our King Arthur be calling people “honey tits?”  Again, probably not.  But Hunnam certainly does his part as a leading man to keep the viewer entertained.

But for everything that Guy Ritchie’s style gives to the film, it also takes away.

Sometimes the quick editing that Ritchie utilizes makes the images onscreen almost incomprehensible, most notably during many of the action sequences within the film.  They action tries to follow the music that accompanies it to a T.  This results in some frames being removed from the video, making the movements on screen very choppy and jarring.  This combined with action that routinely speeds up and slows down makes for possible headache-inducing sequences.

However, the more damning negative against King Arthur: Legend of the Sword may be that character motivations and moments are not given enough time to breath and be fleshed out.  There’s a moment in this movie that is important to the growth of Arthur as he learns of his power.  This moment would’ve been great as a 5-10 minute extended scene, but the entirety of the scene unfortunately feels more like a music video than what it should be: an important moment to Arthur’s growth as a character.  There are many moments in this film that could have been used to grow our attachment to Arthur, but there was an overabundance of style that took its place.

In a similar vein, Jude Law’s villain and most of the side characters, while entertaining, have very limited character arcs.  Law’s character makes a pretty damning decision in order to grow in power towards the third act of the film.  This moment should have had a serious emotional pull to it but failed miserably as the moment had no setup whatsoever with the limited character beats that King Arthur: Legend of the Sword has time for in the midst of its quippy dialogue.

These issues can be seen all over this film as a lot of the fascinated backstory to the legend of King Arthur is quickly glanced over without much time for detail.

King Arthur: Legend of the Sword is an unexpected way to take this iconic story, but I appreciate Guy Ritchie and Warner Bros. for having the audacity to be different.  While the film has obvious issues, there’s a lot of fun to be had here.  It gets a B-.  As it stands, this movie currently holds a 23% on Rotten Tomatoes.  If you were interested in possibly seeing this film, I would advise that you don’t get too discouraged by that Tomatometer score.  King Arthur: Legend of the Sword is a lot more fun than other critics would lead you to believe.

Thanks for reading!  Have you seen King Arthur: Legend of the Sword?  Comment down below with your thoughts!

If you enjoyed this article, subscribe to MovieBabble via email.

[…] more high-profile studio projects of existing IP, like Sherlock Holmes, The Man from U.N.C.L.E, King Arthur, and Aladdin. While having wildly inconsistent results at the box office and (with the exception […]

Guy Ritchie’s involvement intrigued me, as I didn’t think his style would work with this subject matter. I think, after reading numerous reviews, I’ll wait for it to hit a stream and then watch it. Thanks for an insightful review. Cheers

You’d be wise in thinking that. It’s certainly not a film that you have to rush out to see

I felt the same as you, it’s a fun watch.

Definitely getting too much hate!