Film Review – Valerian and the City of a Thousand Planets (2017) 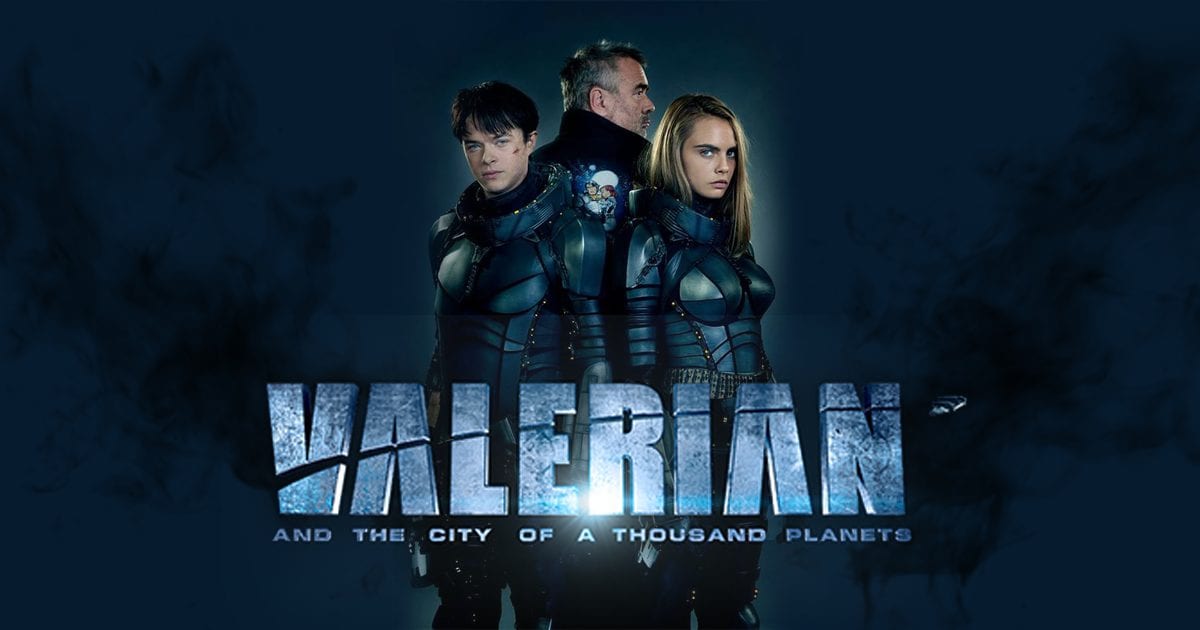 Luc Besson has never been shy about making a film that is both original in feel and incredibly inventive.  His next film, Valerian and the City of a Thousand Planets, looks to up the ante by displaying a groundbreaking display of visual storytelling, a la Avatar.  But is there enough story to facilitate this supposed piece of eye candy?  The following review will be spoiler free.

Valerian and the City of a Thousand Planets is directed by Luc Besson and stars Dane DeHaan, Cara Delevingne, Rihanna, and Clive Owen.

We follow two agents, Valerian and Laureline (DeHaan and Delevingne), who are in charge of protecting the city of Alpha, an ever-growing hub for all different types of species to intermingle and share their knowledge.  At the city’s core, there is a mysterious dark force that threatens the existence of the species living there.  Valerian and Laureline must quickly figure out the identity and cause of the force before the city of a thousand planets is destroyed.

Luc Besson has had a passion for this source material for quite some time.  The idea first popped into his brain when working on The Fifth Element back in mid-90’s.  However, as you can imagine, Besson felt that the technology of the times wasn’t capable of pulling off a movie of this magnitude, putting this idea firmly on the backburner for years.  Once Besson saw James Cameron‘s Avatar, however, he then believed that just about anything was possible on film with only the imagination as a hinderance.

The other problem, however, was finding enough funds to make such a movie.  In order to do so, Besson actually crowd-sourced and personally funded most of the production budget.  As it stands, the production budget for Valerian is $209 million, making it the most expensive independent film ever made. Thankfully, Besson and co. put their available funds to good use, creating a visual experience that is wholly original and impressive.

In 2017, it’s pretty difficult to impress a crowd by simply showing them a big canvass with expansive visuals.  Technology has gotten to the point where just about anyone can do it.  But what makes Valerian stand out from the crowd is that it displays visuals that haven’t been seen before on the big screen.

Besson manages to crafts worlds within worlds, which looks as insanely inventive as it sounds.  There’s an amazing attention to detail to Valerian in terms of world building and management.  Each world feels perfectly fleshed out while adding some colorful scenery to the mix.  As you become introduced to more and more worlds, you become more fascinated by the inner workings of each.  Making a completely wacky landscape feel immersive is no small feat.

Valerian simply oozes visual style.  Just for the hell of it, agent Valerian sprints from world to world, knocking down the barriers between each in a wickedly cool action set piece.

But for all it’s visual splendor, I wish Valerian could have made a better effort to grow its characters.

I really enjoy Dan DeHaan as an actor.  Most of the time, he outperforms the movie he’s in, especially this year’s A Cure for Wellness.  However, he’s pretty miscast in this role.  He’s pegged as the best, most intelligent agent in Alpha and it’s not at all convincing.  When you combine the nonexistent romance between him and Cara Delevingne, you have two main characters that are very, very bland.

To make matters worse, most of the actors speak in complete monotone throughout the entire movie, making every piece of dialogue force you into a sleep-like trance.  There are a few characters that really ham it up, most notably a very fun cameo that I’ll keep a secret for those looking to see the film.  These actors understand the type of movie they are in.  This film should have had a bunch of wacky, silly characters that standout among the expansive special effects.  But, it’s obvious from watching Valerian that there wasn’t a ton of direction for these characters to utilize.

With these bland characters comes an even blander storyline that often becomes sidetracked.

Valerian is a little over two hours in run time.  However, the actual amount of time dedicated to the central storyline of the film is more like an hour and fifteen minutes.  The whole second act feels like a non sequitur to the plot.  Basically, once Rihanna shows up you’re either onboard with this movie or you will quickly abandon ship.  This notion has nothing to do with Rihanna’s performance in the film (although she is pretty terrible in her role), but the film takes a sharp turn into largely generic territory afterwards.

As a moviegoer, I can handle a plot that jumps all over the place if I’m enjoying the ride.  However, there’s nothing all that fascinating about the plot except for the fact that there’s wacky alien creatures populating the screen.  The film also has that problem where once the secretive villlain comes onscreen you know that he’s what’s behind everything.  The rest of the movie then plays out with you becoming ten steps ahead of the movie, just waiting for the movie to catch up and end so that you can finally go home.

For as ambitious as the effects and world building are in Valerian, the story and characters that populate it are suprisingly very safe.

Valerian is truly a visual treat.  It spans worlds that we couldn’t have possibly conceived before this movie was released.  However, there’s nothing from a story or character perspective to prop up those eye-popping effects.  It gets a C-.

This film strikes me as a solid cable watch.  It won’t offend you, it keeps moving, and there’s bright colors everywhere to keep your mind occupied.  It’s the perfect movie to have on in the background while you tidy up your family room.

Thanks for reading!  What are your thoughts on Valerian and the City of a Thousand Planets?  Comment down below!

I completely agree with your review. It was a beautiful movie, but that was about it. Flat characters, emotionless dialogue, and Valerian verbally explained the whole plot at the end. I was so looking forward to this movie, and was so disappointed.

I was looking forward to it as well! I always look forward to wacky sci-fi adventures. Ohh well…

Saw this movie last night. You got it absolutely right. The dialogue was painfully high school and the story was weak. Visuals A+ :)

Every time they talked about their “romance” I cringed lol

I enjoyed the movie more than you did, but I can understand what you’re saying. Just one technical note: it’s Luc Besson, not Beeson.

Woops! That’s why you proofread! lol thanks for that (and your film thoughts as well)

Great review! I haven’t watched this movie yet and I’m pretty happy I haven’t. Though from the trailer you can tell it would be visually pleasing, something (call it a gut feeling) told me this movie would be rather generic and your review confirmed this.

Glad I could help you out there!

Top 10 Movies Based on Video Games