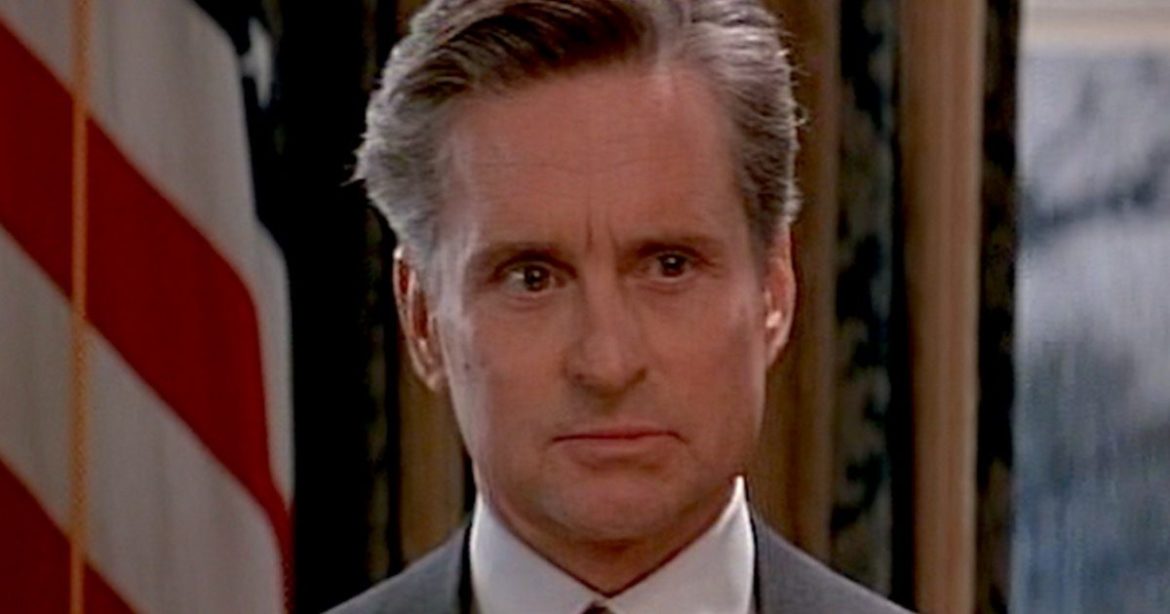 I’m a sucker for Aaron Sorkin, so when I heard that The American President would be turning 25 years old this year, I knew I had to hop on here and let you all know how much I love Aaron Sorkin. The man has a way with words that I can only hope to one day emulate.

The American President is one of the best film examples of this. Every line is written with intention. There’s no throwaway dialogue in this movie. Every sentence just crackles with rich descriptions and political jargon that’s not too hard to understand but makes you feel smart for knowing.

I want to take just a few of those lines today, and let you know what I love about them.

“They want leadership. They’re so thirsty for it they’ll crawl through the desert toward a mirage, and when they discover there’s no water, they’ll drink the sand.”

This is by far the best line to come from this film. It’s spoken by Lewis Rothschild (Michael J. Fox), a speechwriter for the president. Lewis is more than a little outspoken, so this outburst is no surprise to anyone who’s paying attention. He is speaking to the president about the fact that their opponent has been quite vocal about the situation with the president’s new lover, Sydney Ellen Wade (Annette Bening), while the president has been relatively absent in the conversation.

I love the imagery that Sorkin evokes with this line. Instead of portraying the American public as a bunch of unthinking idiots, it paints them in a sympathetic light. They’re not stupid — they’re just desperate for something they’ve lacked for so long that they’ll latch onto anything that resembles it.

I’m also a big fan of the next line, spoken by President Andrew Shepherd (Michael Douglas): “People don’t drink the sand because they’re thirsty. They drink the sand because they don’t know the difference.” This is an intellectual debate at its finest. This is what Sorkin excels at. It’s biting dialogue but it doesn’t hit below-the-belt or end up in stupid insults. It’s smart.

“My name is Andrew Shepherd, and I am the President.”

This is another thing that Sorkin does particularly well in his writing — making a dramatic exit. President Shepherd speaks this line in a press conference addressing the crime bill and the environment bill. Fed up with the way Senator Bob Rumson (Richard Dreyfuss) has been attacking him and Sydney, Shepherd finally speaks up.

The whole speech that President Shepherd gives is riveting but this particular line is amazing. It evokes authority and a sense of control. It puts Shepherd’s opponent in his place and reminds him of who is really in charge. Most of all, it introduces a new side to this character. Throughout the film, we see President Shepherd as a pretty laid-back guy with a good heart. Here, he shows how far he is willing to go for that good heart.

I wouldn’t be surprised if this speech alone was what prompted Aaron Sorkin to eventually write The West Wing. President Shepherd’s speech here would have fit in perfectly during season three of the beloved TV show, during the presidential race.

Guys, I really love Aaron Sorkin. And The American President.

“Leon, somewhere in Libya right now, a janitor’s working the night shift at Libyan Intelligence Headquarters. He’s going about doing his job… because he has no idea, in about an hour he’s going to die in a massive explosion. He’s just going about his job, because he has no idea that about an hour ago I gave an order to have him killed. You’ve just seen me do the least Presidential thing I do.”

Being the president comes with some horrible drawbacks and Aaron Sorkin really hits the nail on the head. The president shares this in response to one of his staff telling him he can use this moment for political gain.

Even though being Commander-in-Chief comes with the territory, it doesn’t make it any easier to give the order to kill. The combination of Michael Douglas’s acting and Sorkin’s writing gives this scene a deep impact. For me, personally, when I think of attacks like this ordered by the president, I don’t often think about the little people that are affected by this. They didn’t have anything to do with it, but they pay the ultimate price for it.

The American President is well-orchestrated in this way. It has its moments of levity but it always remembers the heavy subjects it is speaking about. It’s a great mix of political comedy and political drama.

“Let me see if I got this. The third story on the news tonight was that someone I didn’t know thirteen years ago when I wasn’t president participated in a demonstration where no laws were being broken in protest of something that so many people were against, it doesn’t exist anymore. Just out of curiosity, what was the fourth story?”

This is one of the moments of levity that I love so much. Lewis and the press secretary, Robin McCall (Anna Deavere Smith), are telling the president about Sydney’s previous involvement in a protest against Apartheid. Their opponent has retrieved photos of the protest showing Sydney next to a burning American flag. President Shepherd handles this perfectly and with a trademark wit.

Aaron Sorkin has a way with witty comebacks. They’re never just schoolyard insults and one-word retorts; his responses are always sprawling displays of intelligence and wordplay that leave the victim stunned. In real life, it would be kind of annoying. But in The American President, I love it.

You just don’t get those kinds of comebacks in movies anymore. Now, I have to settle for a talking space raccoon calling his friends stupid.

But, seriously, folks, The American President is a beautiful movie. It has romance, humor, politics, and drama, and it’s engaging. Never a dull moment with this one.

Thank you for reading! What are your thoughts on The American President and Aaron Sorkin? Comment down below!