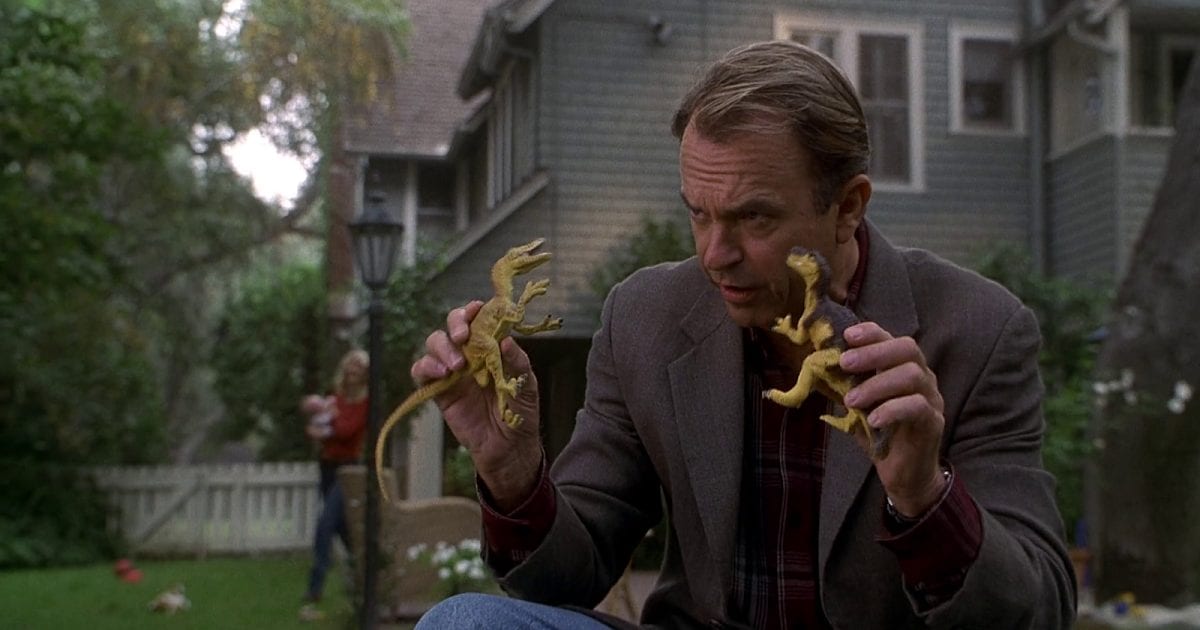 Many moviegoers left the theater with mixed reactions on July 18, 2001, after seeing Jurassic Park III. Truth is that the film had a very difficult time with the production and it was tough to get things moving, and those issues were felt from just about everyone on set.

With Jurassic World: Fallen Kingdom finally arriving in the United States, let’s dive in on the bumpy production of Jurassic Park III.

Jurassic Park III‘s troubling production began with the story. Initially, Michael Crichton — writer of the Jurassic Park novel and co-screenwriter of the first film — was set to work on the third film’s story but left after a few days of unproductivity.

Crichton then let Steven Spielberg come up with a story, and Spielberg actually had a story in mind. His story involved Alan Grant staying on one of InGen’s islands and reporting research on the living dinosaurs that now inhabit the earth. Director Joe Johnston described it as Alan Grant being like Robinson Crusoe, but didn’t see him going back to the island.

Clearly, that story did not come to fruition.

Craig Rosenberg started to write the first draft of the script in June 1999. The script would involve teenagers who get marooned on Isla Sonar. Rosenberg’s script was rejected with Johnston stating that it wasn’t a badly written script but “it read like a bad episode of Friends“.

Filming expected to begin in August of 2000. Feeling dissatisfied, Johnston and Spielberg rejected the script. This came just five weeks before cameras began to roll. At that point, production had spent $18 million. They would later use the simpler “rescue mission” story suggested by David Koepp. Alexander Payne and Jim Taylor began rewriting the script in July 2000.

Cameras began rolling without a full script. “We shot pages that eventually went into the final script but we didn’t have a document,” Johnston said. Principal photography began on August 30, 2000.

Production concluded in Hawaii on September 20, 2000. Production then returned to Hawaii in January 2001 to film the ending. The ending was not in the script when they were in shooting in Hawaii the first time.

If there was no third book and Micheal Crichton didn’t really have a story that would be satisfactory, why even bother?

The obvious answer would be “it’s Hollywood, they love money”, but why waste money on a disastrous production? They should’ve seen all the red flags that were there and just not have bothered releasing a third film. We all know the outcome of it now, and it wasn’t pretty.

I guess it turned out fine in the end, seeing that 14 years later, the sequel Jurassic World was released (or you could say that Jurassic Park III killed the franchise for 14 years, but I digress). Now Jurassic Park III is nothing but a thing in the past, a forgotten film in a massive franchise. Well, there’s still one element from the movie that we all still remember:

Thanks for reading!  What are your thoughts on Jurassic Park III?  Comment down below!

I had always wondered why this movie was so off the rails! To be fair though, JPII probably wasn’t all that great either; I was just old enough to differentiate between a good and bad film by the time JPIII came out. Great post!

Pride Month: A Look Back at LGBT Characters...