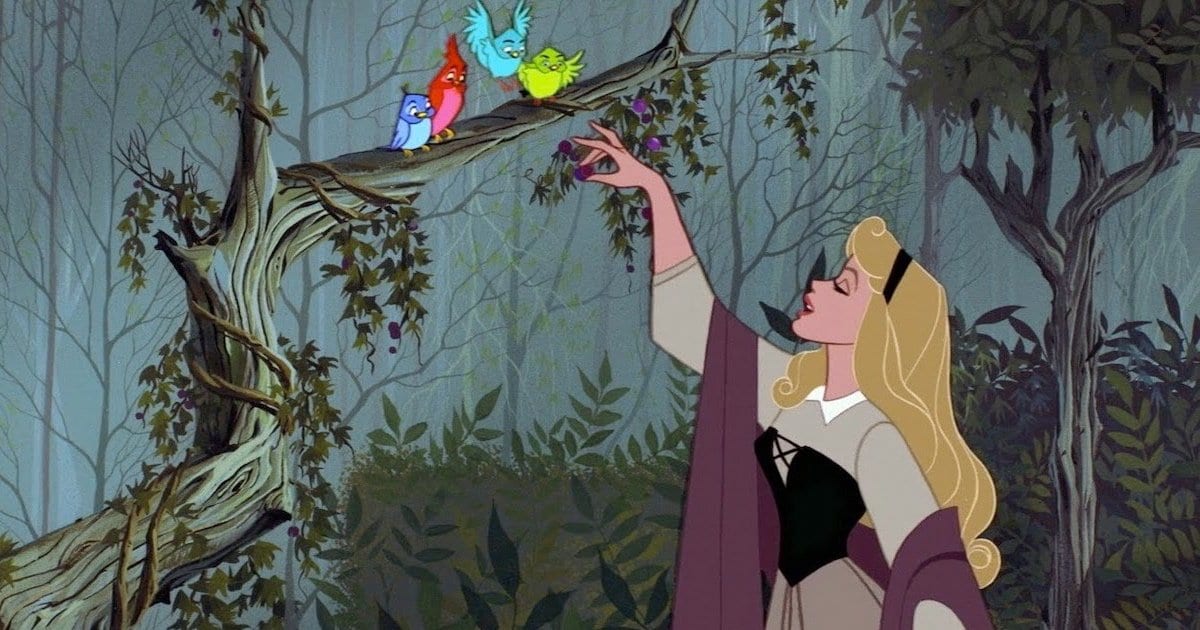 It’s easy to dismiss Sleeping Beauty as your average princess-centered Disney film. Its plot bears many surface similarities to Snow White, mainly the slumbering royalty awoken by a kiss. What saves Sleeping Beauty from being a carbon copy, however, is its execution, mainly in the art department. Its visuals play a key part in distinguishing itself from the animated canon as well as telling the story.

Walt Disney was at the peak of his career in the late 1950’s. He had conquered film, television, and virtually created the theme park industry with the opening of Disneyland. As his mind turned towards the future, however, the animation studio he founded the company on was falling behind. Rising costs made turning a profit on an animated film more difficult in spite of their popularity. When adapting Sleeping Beauty, Walt recognized the danger of it retreading Snow White‘s territory. He decided the best way to separate the two was to go all out on the visuals.

Walt Disney never liked to repeat formulas in filmmaking. He preferred trying new things and using what he learned to create something original. In this case he gave his animators more creative control over the film’s overall design. The result is Disney animation that is unlike any before or since.

Animation For An Age

Perhaps one of the greatest influences on Sleeping Beauty‘s look is United Pictures Animation — or UPA for short. Their approach defined 1950’s cartoons. What UPA’s characters lacked in movement they made up for in shapely style (for examples, see Gerald McBoing-Boing, Gay Purr-ee, and Mr. Magoo’s shorts). Sleeping Beauty is like if UPA was given the budget it deserved. The characters gracefully dance across the screen without losing their contours. Their bold geometric outlines define their inherent power and royalty. When I look at Aurora, even in her peasant disguise, I don’t see a naive princess like Snow White. I see a young woman ready to become queen.

Sleeping Beauty is also one last hurrah for the smooth lines and hand-painted colors that were common for the time. Beginning with 101 Dalmatians, the animation team would switch to Xerox in order to quickly capture and ink their drawings. For better or worse, this resulted in animation with scratchy, unpolished lines that reveals every detail of the artists’ work. Disney’s style would remain this way until the computerized CAPS system came along in the 90’s. 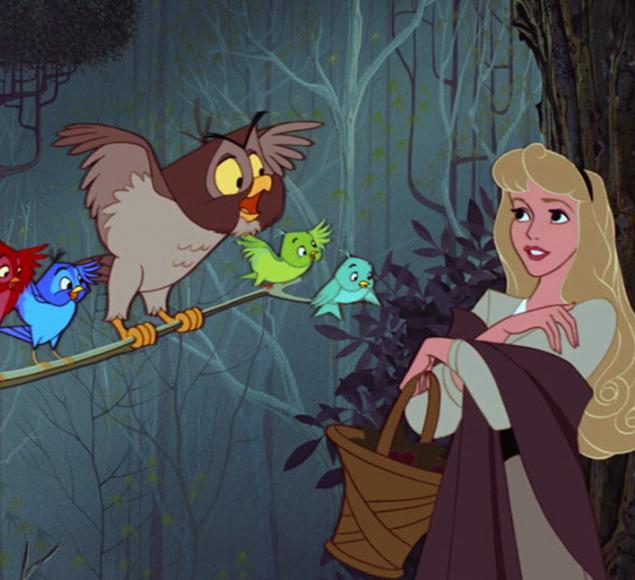 The Mistress of All Evil

Sleeping Beauty‘s greatest triumph is its antagonist, the wicked fairy Maleficent. She is elegant, poised, even cordial at times. You could almost think she can be reasoned with. Yet it’s all a mask for the roiling fury beneath. One small slight, such as a forgotten invitation, makes her erupt in dangerous ways. But even when she loses her temper, she never loses her head. Always cunning, she remains two steps ahead of the heroes.

Though we’re already aware of Maleficent’s evil nature, there are subtle changes in her design as the film progresses. These occur to make her more monstrous in our eyes. Her skin shade alters from a pale green to a sicklier chartreuse. Her face elongates until you could cut yourself on the sharp corners of her cheekbones and chin. All this builds up to the climax where she becomes fully terrifying inside and out: her transformation into a fire-breathing dragon.

The best use of color, however, is when it represents a character; similar to how a leitmotif in a score symbolizes a theme or person. The Good Fairies are the prime example. Flora, the leader and the most traditionally feminine, is obsessed with pink. She gifts infant Aurora beauty, a standard held by most women but not the most important. The fairy Merryweather associates herself with blue, a color usually geared toward boys. She’s also more practical and a bit wiser. While we may never know what her intended gift for Aurora would have been, she does cast the spell that changes an untimely death to a less harmful slumber.

This symbolism comes to a head in a memorable scene. On Aurora’s sixteenth birthday, Flora and Merryweather fight over whether her new dress will be pink or blue. While played for laughs, it’s a clash over which mindset — traditional femininity or modern sensibility — they want Aurora to follow as future queen. It’s interesting to note that this moment, where these two viewpoints refuse to compromise, is what allows Maleficent to discover Aurora’s whereabouts and undermine their plan to protect her. In fighting over their colors, ergo their ideologies, the fairies lose sight of the more pressing issue at hand.

Sleeping Beauty is one of those movies I can never put on in the background as I work. The artistry on display sucks me in. It took the better part of decade to finish the film, and it shows in every second. This doesn’t mean Sleeping Beauty is a perfect Disney movie, however. The title character is not the most interesting princess of the bunch and neither is her prince. I prefer to view it through the lens of Harryhausen’s Greek myth epics, where supernatural forces pit good against evil like pieces on a chess board. Our protagonists are pawns to the Good Fairies and Maleficent. This power dynamic between women makes Sleeping Beauty a refreshingly feminist work – though that’s an analysis for another time.

If you’re wondering who to thank for Sleeping Beauty‘s marvelous art, look no further than Evyind Earle. His hyper-detailed backgrounds are what transform Sleeping Beauty into a living tapestry. He drew from Italian renaissance-era art and art deco to create something original. His paintings could make their home in the Cloisters. I urge you to check out his works and top it off with a rewatch of this classic he designed. You might find more to appreciate when viewed through an artist’s eye.

Thank you for reading! How do you feel about Sleeping Beauty’s artwork? Comment down below!

[…] the team and in the stands with the fans. The tension rattles, and the victory excites you. When Disney is operating at its best, you can feel the moment, and Miracle brings one of the greatest sports […]

A great movie despite what some super-feminist haters may think!

Lovely read! Sleeping Beauty is one of my favorite Disney movies of all time! In fact, the artistic background with the colorful sketches really intrigued me. I love the effects that raw animation creates even though it’s 2D.

I never noticed that Maleficent’s facial structure changes over the course of the movie — thank you for pointing that out! I’d really be interested in your analysis on the feminism at play in the movie.

You’re welcome! I think I might write that up one day. 😊

I really hope you do!

Every inch of this movie is GORGEOUS…it’s also my all-time favorite Disney film. 😍

It’s one of my favorites too! So beautiful! 😍💜