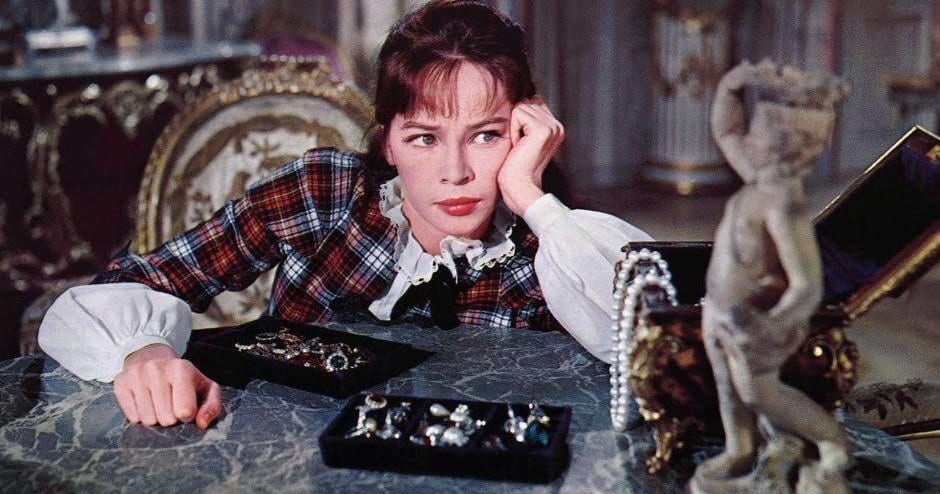 Yesterday marked the 60th anniversary of Gigi’s release. The genuinely funny musical has credits filled with legendary names: Maurice Chevalier, Lerner and Loewe, Vincente Minnelli (as in Liza’s father) as the director, with music conducted by Andre Previn (as in Woody Allen‘s father-in-law).

MovieBabble takes a look back at Gigi, to see how well it has aged since winning every major Oscar category in 1959  (more on that part later).

Let’s start with the first song we hear in Gigi, “Thank Heaven For Little Girls,” which starts off, “when I see a girl of six or seven….” Umm… that’s creepy, no? It does make one smile, however, thinking of Lumiere from Beauty and the Beast. Jerry Orbach based his performance (and accent) as Lumiere on Maurice Chevalier in Gigi, and it shows. It is also said that “Be Our Guest” was written intentionally to resemble “Thank Heaven For Little Girls.”

Speaking of Beauty and The Beast connections, Chevalier’s character, Honoré, is the uncle to the main male character Gaston. Gaston is quite pompous, and has women falling at his feet. Gaston also wasn’t a character’s name in the original Beauty and the Beast story. Hmm.

Wait… exactly how many times did the people at Disney watch Gigi while creating the original Beauty and the Beast? Gigi herself is similar to Belle, in that she is unaffected, and more freethinking than others wish she was. Gigi’s first song is even about how unappealing she finds the way of life expected of her — much like Belle’s first song. Apparently, the similarities are fairly obvious, as a quick Internet search yields several references to this. For a movie released in 1958, with a story set in 1900, it’s no surprise that the attitude toward women isn’t enlightened by 2018 standards. They are seen as property, gossips, uppity bores, and the like. Gigi herself is even referred to as “little idiot,” and “brat” by Gaston, and is initially treated as much younger (her exact age is not revealed, but in the book she was 16). Honestly, Gigi is not even the main focus of her self-titled movie, Gaston is.

However, Gigi is clearly different from the other women and girls in the story. She is intelligent (if a bit naive), has her own opinions, and is what we might have called “a tomboy” at the time. She doesn’t do the stereotypically “feminine” things her peers do, and would rather play cards with Gaston than pay attention to her finishing lessons.

To play devil’s advocate, one might argue that the way other female characters act (and are thought of/treated) is simply for contrast. Much in the way that characters in Forrest Gump use profanity to highlight how clean-cut Forrest is, vapid women are here to show Gigi is not.

The poor treatment of women is at times addressed as such. Gigi’s grandmother (played absolutely perfectly by Hermione Gingold), in the scene where she sings “I Remember It Well” with Honoré, calls him out on his womanizing. It seems the two were once quite an item, but he was unfaithful. She also takes Gaston aside and voices her objections to his taking Gigi out. She basically tells him he’s a womanizer, and being seen out with him will give Gigi a reputation. Despite “Grandmama/Mamita” being pretty cool, she switches between being delightfully progressive, and disturbingly controlling.

Gigi is being groomed to be a… well, it’s a bit convoluted, but basically a courtesan. Gaston is part of high society, and needs to have affairs that end dramatically in public. To make the papers. Or something.

It’s troubling how much Gigi is treated like a non-person in this matter. She eventually agrees by telling Gaston she’d rather be miserable with him than without him (aww, so romantic, right?). She then sings a song to a cat, about preparing to reluctantly lose her virginity.

The escort arrangement is called off when Gaston realizes he loves Gigi (after he suddenly finds his uncle’s sexist commentaries offensive). Instead, he comes to the home Gigi and her grandmother share, and asks Grandma for Gigi’s hand in marriage.

A “happy ending” that certainly took a long and troubling journey to get to. It’s almost a Fifty Shades situation, where an unhealthy relationship suddenly leads to love and marriage. Here’s to hoping women who grew up thinking this was how it happens eventually learned otherwise. Then again, Fifty Shades Freed came out this year, so maybe not.

Gigi is not a bad movie, on the contrary, it’s very entertaining. Much of the acting is on point — as is the singing — and the visuals are stunning. In fact, the film won a total of nine Academy Awards at the ceremony in 1959, including the “big three”: Best Screenplay (Adapted), Best Director, and Best Picture. It also won for the music (original song, and score), cinematography, costumes, set decoration, and editing.

The studio that released Gigi, MGM, was so happy about the Oscars, they instructed their receptionists to answer the phones, “Hello, M-Gigi-M.” True story.

Too Late to Edit History

The film is, indeed, absolutely captivating to watch, even if some of the content is troubling by today’s standards. It’s very difficult, if not impossible, to view old films through the same lens we used to. There is bound to be something we find cringeworthy.

However, movies are essentially time capsules. If we pop them open and remove things that offend the current generation, they lose their authenticity. The sense of history goes away. In this way, Gigi is surely a treasure old Hollywood left behind for us.

Thanks for reading! What are your thoughts on Gigi? Comment down below!

Please go back and listen to the song “Thank Heaven for Little Girls” again; you’ve got the opening lines wrong! The words are: “Each time I see a little girl / Or five or six or seven “. And the song emphasizes that “…little girls get bigger every day” and goes on to describe their growing up into beautiful women. It’s NOT a song that focuses on little girls as sexual objects!

Also, do read a good translation of Colette’s story “Gigi” – that’s what the musical was based on, after all. And yes, her story IS about the training of a courtesan; more than one actual fin-de-siecle French courtesan is mentioned in that story! Seriously, what did you THINK it was about? Read the witty, delightful original story in which yes, a 15 year old girl does indeed win the heart and hand of the most eligible bachelor in Paris! And settle back to enjoy the movie which does this classic story full justice.

[…] sequence!4. GiGi (1958) I loved GiGi and still do, but I obviously did not completely understand the storyline when I was younger. 5. High School Musical I don’t care what anyone says. The movie is good […]

So I recently saw this for the first time and I did enjoy it. I don’t really find the ‘Thank Heaven for Little Girls’ song creepy; it was a different time and you can tell that it’s not meant to be anything pedophiliac. The song does mention “what would little boys do?”, so I find it more of a sweet sentiment regarding the first time we as small boys and girls fall in love with the other especially if we didn’t find them attractive at first.

And I actually didn’t quite get that Gigi was being trained as a courtesan, lol. So when the main character takes her out for the first time, I was under the assumption that this was a date and that he had proposed to marry her. So at the end of the movie when he proposes, I was confused wondering that hadn’t this happened already, lol?

But I mean, I enjoy the film and you havta look at it through whimsical lenses to maintain the charm; you can’t get too serious about it. Just my opinion.