‘Godzilla vs. Kong’: An Outlandish Battle for the Ages 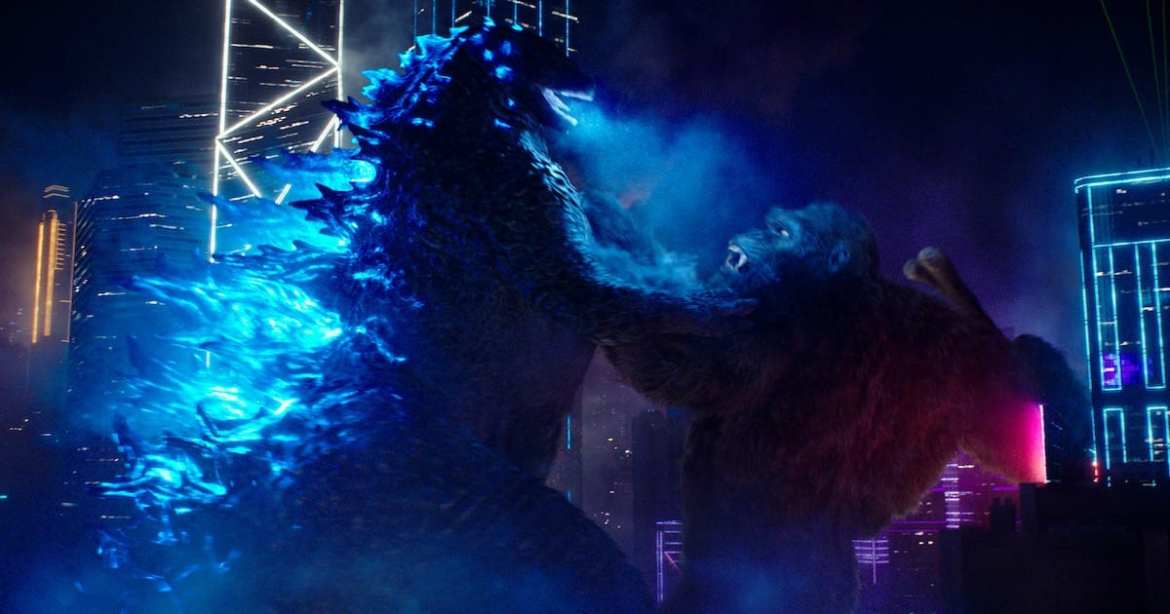 From director Adam Wingard, Godzilla vs. Kong is the next epic installment in the Warner Bros. MonsterVerse that has been crafted over the past seven years. Kicking it off with Godzilla in 2014 and following it up with Kong: Skull Island in 2017 and Godzilla: King of the Monsters in 2019, this film finally revives an age-old rivalry for modern audiences. But who will win?!

Godzilla vs. Kong follows in the footsteps of its predecessors with a slew of human characters at its center. Where Godzilla and Skull Island handled its human characters with a bit more care — although clearly not appealing to all audiences — it is well known that Godzilla: King of the Monsters contained a large portion of dull and boring human moments that really took away from its potential. Thankfully, this time around, writers Eric Pearson and Max Borenstein understand the mistakes that came from the previous film and speed up the process by skimming through simple introductions before getting right into the glorious action that everyone wants to see.

The film kicks off by following two groups. The first is a group of scientists who have been housing Kong within a secluded sanctuary on Skull Island after a large storm surrounding the island closed in, wiping out almost all life on it. The second is a newly established cybernetics corporation who are researching information about the Hollow Earth Theory, as introduced in Skull Island, before a horrific attack comes upon them from the apparent “King of the Monsters”. After this occurs, we’re thrown right into the action as Kong and Godzilla begin to duke it out during an attempt to transport Kong to the Arctic for reasons that would require spoilers.

As mentioned, the film does go back and forth between the monsters and the humans as their stories coincide. However, thanks to some self-aware writing and Adam Wingard’s smart directing choices, the human moments are not nearly as detrimental or boring as the previous film. Filled with some genuine laughs and a handful of heartfelt moments, the two human character groups actually end up adding to a lot of the emotion that comes in the film’s final act. 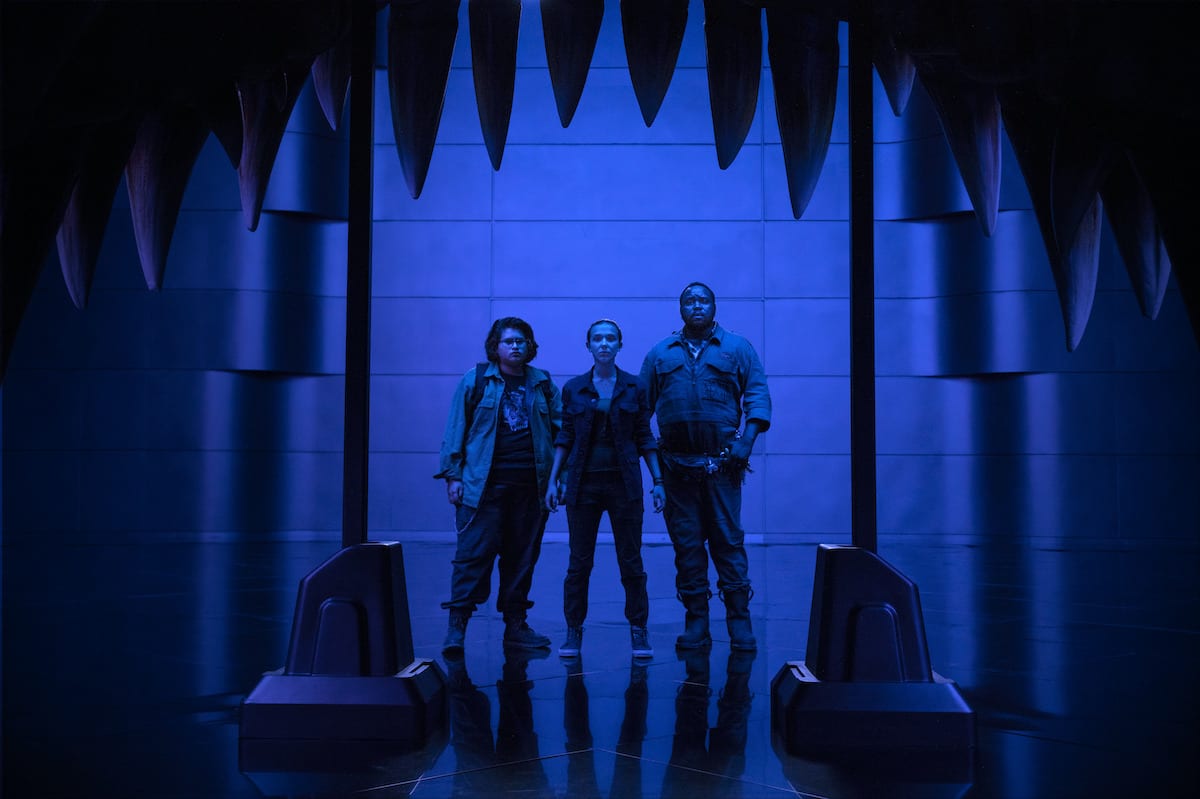 In The Blue Corner

What the audience is really here for, though, is the monsters and their inevitable showdown. First off is Godzilla’s side of the story that continues on from King of the Monsters as the new apex titan on the block. Having left the people of Earth at peace after the events of the previous film, Godzilla quickly becomes disgruntled with a handful of things occurring in the world. First, there’s the new cybernetics corporation who are up to some secretive stuff that really isn’t sitting well with Godzilla. Second, there’s the obvious rivalry with Kong that has been reawakened as he is being transported across the planet, which kicks off the ultimate showdown.

Wingard continues Godzilla’s story enough from the previous film, but embraces that this film is really just a monster mash and doesn’t mess around with trying to frame a proper narrative around Godzilla. Somewhat framed as the film’s antagonist, our nuclear lizard friend isn’t forgotten about, but isn’t as fleshed out as his enemy. This is most likely due to Godzilla previously having two standalone films as opposed to Kong’s one. It might also be due to the general insanity of this entire film and Wingard not trying too hard to place an overbearing weight of emotion on Godzilla’s story.

In the Red Corner

With that said, it is almost the opposite with our big monkey friend, Kong. Having only one standalone film within WB’s MonsterVerse, the film more so frames Kong as the protagonist of the film’s story. Having being left alone on Skull Island after the storm closed in on it, Kong has been in captivity for an undisclosed amount of time with his only contact being with Jia (Kaylee Hottle), the young girl who is on-site with Ilene Andrews (Rebecca Hall). This leads to Nathan Lind (Alexander Skarsgård) getting approached by the previously referenced corporation in an attempt to further explore his ideas behind the Hollow Earth Theory, which sees our cast of characters on Kong’s side of the story having to transport Kong to an access point to the Hollow Earth world, as a tour guide of sorts.

Through Wingard’s direction, the film builds a genuine relationship between Kong and Jia, which results in an emotional connection being formed between the audience and Kong. Kong is who most audience members will side with based on the story’s construction — not accounting for any previous biases towards these characters, of course.

Let’s Get Ready To Rumble

After setting up the initial character motives and directions each story is going to follow, Wingard wastes no more time and gets right into the juicy spectacle. Moving relatively quickly, the film becomes a wild sci-fi adventure for a time during the second act before becoming a full-blown boxing match between our titular characters. With such pace, the film never becomes boring with its human characters, unlike King of the Monsters, and actually embraces the silliness of their sides of the story. By doing this, Wingard manages to offer a good balance of genuine story beats and scenes of monsters punching.

Ultimately, this all leads to an incredible final act filled with incredible effects and a real sense of scale. It’s truly a sight to behold.

And the Winner Is…

In the end, Godzilla vs. Kong is an incredibly entertaining film from start to finish. With human characters that no one really cares about, Adam Wingard manages to make their respective stories engaging and relevant enough to the grandeur of the film that their side of things never detracts from the monster fights. Filled with some stunning visual effects and great action, the film really manages to sell the scale of these two behemoths as they duke it out on the final stage. Godzilla vs. Kong is the exact kind of pulpy blockbuster many have been craving for some time.

Thank you for reading! What are your thoughts on Godzilla vs. Kong? Comment down below!

‘Mortal Kombat’ Is Far From a Flawless Victory,...