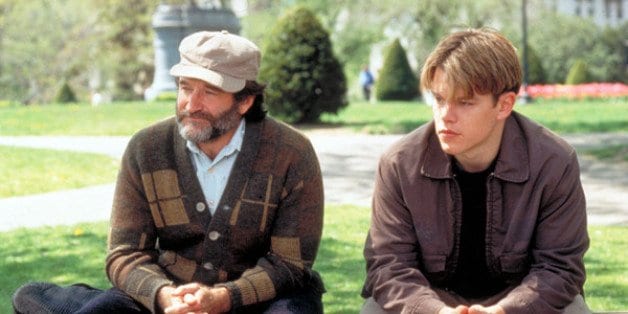 Once in awhile, you need a movie that’ll force you to have a nice little tear-fest.  Good Will Hunting is one of those films.  Praised upon its release, Good Will Hunting launched the careers of Matt Damon and Ben Affleck.  But does the film still hold up today?  The following review will be spoiler free.

Good Will Hunting is directed by Gus Van Sant and stars Matt Damon alongside Robin Williams and Ben Affleck.  We follow a young Will Hunting (Damon) who has an amazing mind but has not been able to express it in a constructive way as he gets wrapped up in crime and medial jobs.  However, after solving an incredibly difficult problem while on the job at MIT, a famed professor takes him under his wing and attempts to mold his personality.  But, the professor (played by Stellan Skarsgard) quickly learns that he’s going to need the help of an old friend (played by Robin Williams) to get through to Will’s softer side. Before this film hit theaters on December 5th, 1997, hardly anyone was taking  Matt Damon and Ben Affleck seriously in Hollywood.  Damon had done many smaller roles and Affleck was seen as somewhat of a heartthrob rather than a serious auteur.  When those in the industry heard that they were collaborating on a screenplay, many just rolled their eyes.  What could two young hot shots possibly do with a script that circled around a character driven idea?

That being said, there was some intriguing talent that began to fill out the cast and creative team for the film.  Gus Van Sant had proven himself as a strong director of smaller projects (although he would then direct the shot for shot remake of Psycho a year later) and established actors like Stellan Skarsgard and Minnie Driver then signed on for the project.  From then on, a buzz for Good Will Hunting began to grow.

Absolutely nothing.  Moving on!

First and foremost, I need to praise the writing of Damon and Affleck.  Good Will Hunting could have been a very cliched and run-of-the-mill story that we’ve seen countless times.  However, the realization of each character on screen is so outstanding that it makes up for any type of non-originality.  Each person on screen (even the much smaller roles) all have a defining trait that allows them to stand out while not making the movie cluttered.  There are clear motives for each character within a tightly told story that sticks to its own structure.  The script is certainly worthy of the Academy award it won the following year at the Oscars. However, what really gives Good Will Hunting the ability to be revisited over and over again is the performances and chemistry between the castmembers.

I’ll knock out the relationship that this movie is known for first: that of Matt Damon and Robin Williams.

You saw the headline of this article, so you know how great I think the late great Robin Williams is in this film.  His disarming nature is perfect for the role of a less than typical counselor.  It’s pretty remarkable that the best moments of a film can be when two people are just talking back and forth for minutes on end.  He has these long soliloquies that are reminiscent of Shakespeare, but what makes them so compelling is how he emotes with every single word, painting a picture of a tortured yet beautiful past.  The moment between Williams and Damon on the park bench is a perfect representation of this discussion.  You feel every bit of sadness and glee in Williams’ heart.  It feels very, very real.

A more underrated connection that occurs is between Minnie Driver and Matt Damon.  As their relationship grows, there’s something inherently sweet and real about the two of them.  There’s a raw sensibility to their interactions in that they don’t feel staged or created.  Their lines are delivered in a manner where its seems like Gus Van Sant just tracked down a random couple in the middle of their date.  Even when their relationship takes a turn for the worse, it feels very genuine.  This speaks to the acting prowess of both actors.

Lastly, by far the most underrated influence on Will Hunting is Ben Affleck’s character named Chuck.  Over time, many have joked that Ben Affleck did hardly anything in Good Will Hunting.  It got to the point where even Family Guy parodied the dynamic in one of its episodes.  However, I could argue that Chuck’s influence on Will is the defining moment in the film.  There’s a little speech that Chuck gives to Will later in the film that finally forces Will to act.  It’s poignant and very, very affecting.  Although he’s not always front and center of Good Will Hunting’s narrative, he has a lasting effect on the story that even rivals Robin Williams’ influence in a very subdued manner.

As a result, Good Will Hunting is an all-time classic according to this critic.  It stands as one of my favorite films to date and should bring a smile to your face (like it does for me) every single time it’s on television.  It gets an A+.  There’s something to be said about a film that can make you laugh and cry throughout its run time while feeling somewhat timeless.  Good Will Hunting also gave us two of the biggest names in Hollywood today, so it continues to have a cultural relevance today.

Whatever the genre, movies stand the test of time because of great and memorable characters, and Good Will Hunting has more fleshed out roles than many, many movies.  How do you like them apples?!?!

Thanks for reading!  Have you seen Good Will Hunting?  Respond to the below to let your thoughts be heard!

My mom has been trying to make me watch this movie for YEARS and I finally saw it a few months ago. I fell in love XD Such a great movie!

It’s so great!!!! Definitely one of my favorites!

Good point about the well-developed characters. When I wrote my review (https://wordpress.com/post/100wordreviews.wordpress.com/338) the feeling I came away with was that there wasn’t a “bad guy” character, a typically one-dimensional adversary that the protagonist has to defeat. Every main character is written with respect, even the ones you don’t like so much.

Mississippi Burning and the Wages of Hate