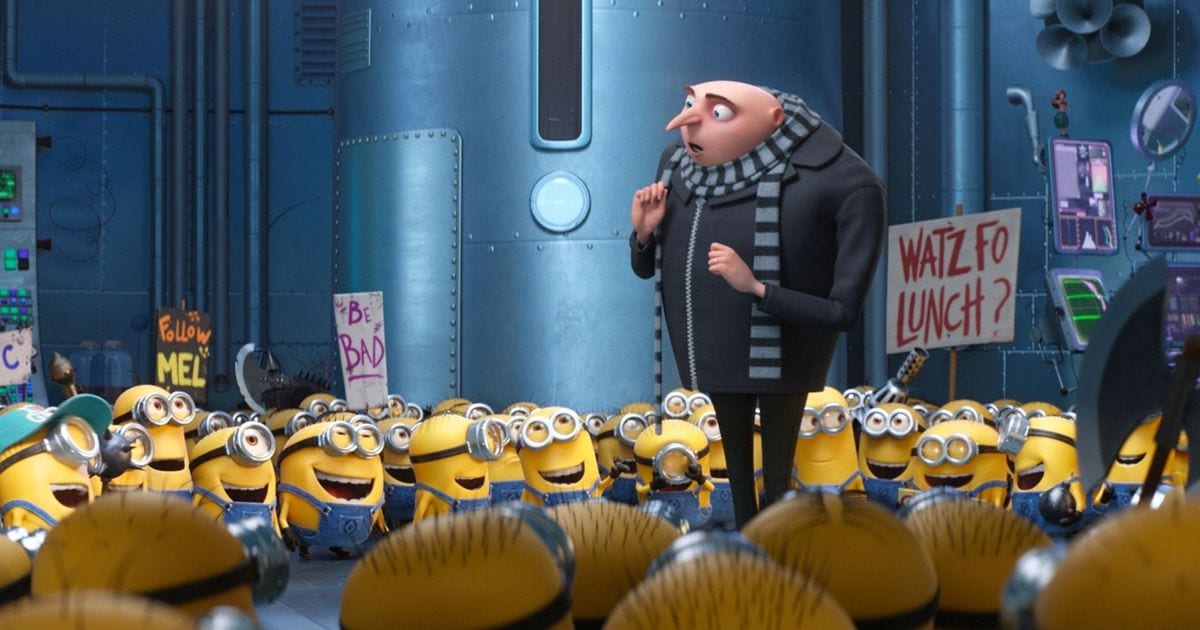 This weekend has another animated film in store for us, Despicable Me 3!  Although many people are sick of those little, yellow Minions, their movies continue to gross a ton of money all over the world, all but guaranteeing more movies to come.  So how does the latest film, Despicable Me 3, stack up to the other Illumination films?  The follow review will be spoiler free.

Despicable Me 3 is directed by Pierre Coffin and Kyle Banda and stars Steve Carell and Kristen Wiig reprising their roles along with newcomer Trey Parker.  Gru (Carell) loses his job in the Anti-Villain League due to a run-in with Balthazar Bratt (Parker), a failed 80’s television star turned villain.  However, Gru quickly learns that he has a twin brother named Dru (also Carell).  They quickly unite at Dru’s home where Dru entices Gru to get back into villainy once again.  Gru quickly obliges, leading to a zany adventure once again. Many people would admit that they thoroughly enjoy the first two Despicable Me films, especially the first film that had a lot of heart and laughs.  However, a lot of fans of the franchise quickly dissipated after the Minions film, which gave those gibberish-talking sidekicks their very own movie.  While many loved the little guys as side characters in the Despicable Me films, a vocal group of people despised the Minions film for being an obviously marketing ploy by Universal Studios and Illumination.

From MovieBabble’s point of view, Illumination animation has released a bunch of commercially successful films with great marketing campaigns that have, for the most part, lacked that extra bit of “oomph” to be in the discussion of good animated films.  There are enough films in Illumination’s filmography to develop an established tone that is prevalent in each film: zany, slapstick comedy.  All these films go for non-stop, family friendly comedy.  However, most of them fail to establish an emotional pull.

Judging by the trailers to Despicable Me 3, it seemed like we were in for more of the same. There’s a lot of laughs to be had in Despicable Me 3 as you might expect.

Unlike many people, I don’t hate the Minions.  They have certainly become overbearing as Universal has realized the marketing potential of the characters.  However, when used appropriately, they can be very, very funny.  They’re perfect as side characters.  Nothing more.  There’s still too many Minion shenanigans for my liking (we’ll get to that in another section of the review), but it appears that the creators of Despicable Me 3 listened to the fans and dialed back the Minion section of the story to focus on the relationship between Gru and Dru.

Steve Carell is good for a lot of laughs in his duel role.  The crux of the story revolves around the relationship of Gru and Dru which is due for some very solid laughs as the two attempt to get into all types of villainy together.

If you’ve seen any of the previous Despicable Me films, you already have a strong grasp for the tone of this next installment.  This means that if you enjoyed the first two legs of this trilogy, odds are you’ll have a ball with this film as well.

Despicable Me 3 made the smart decision of adding Trey Parker from South Park to the mix.  His character, Balthazar Bratt, is very underused.  Luckily, Parker adds some fun quirks that work with the overall tone of the story.  The spin they put on his character, a failed kid TV star that never got over it, is a pretty hilarious addition to an already absurd movie.  All the while, Parker adds in some of his flair that is very reminiscent of some of his iconic caricatures on South Park.

This is probably a tinier detail for many, but it’s certainly worth noting for anyone who loves South Park.  Because of this detail, Balthazar Bratt should help to keep adults entertained in this kid-centric film.

Unfortunately, Despicable Me 3‘s zany tone detracts from the movie as a whole.

Throughout the film, we as the audience are diverted away from the main story time and time again to cut to wacky hi-jinks from both Minion and non-Minion characters.  These moments are often funny, but they have practically nothing to do with the main story.  In an already short film (ninety minutes), most if not all of the run time needs to be focused on the main storyline for it to feel emotionally satisfying in the end.

The plot of the film is shrunk to the main essentials in favor of these vignettes, causing nothing to come out and grab you.  There’s a sub-plot with the Minions that is predominantly displayed in the trailer (the prison sequences) that does not add to the story whatsoever.  If you were to remove these moments from the film, the plot of Despicable Me 3 would still play out exactly the same. 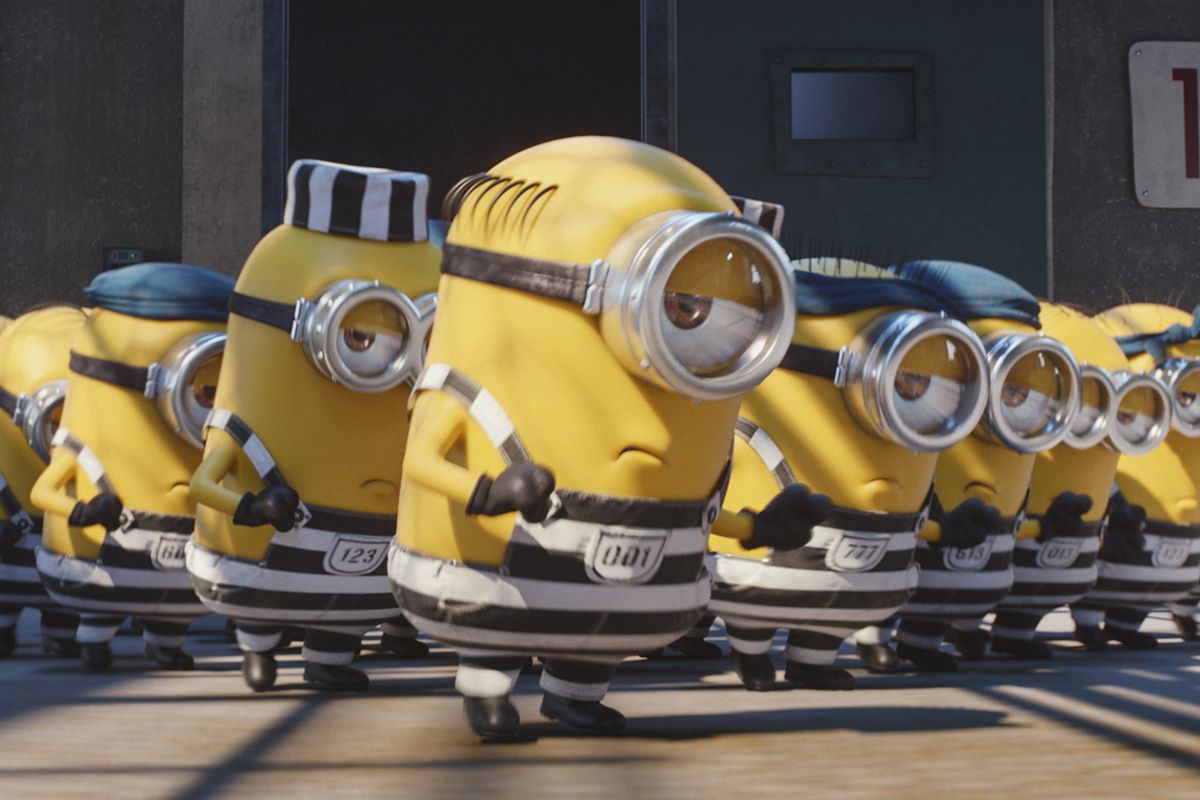 The previous description relates to far too many moments in the film.  In order to keep the film’s run time from becoming bloated, conflicts that arise are resolved almost instantaneously so that the film can keep moving along.  There is one particular conflict that arises between Gru and Dru that is literally fixed in two minutes.  There’s just too much of this going on to make Despicable Me 3 wholly recommendable.

Sadly, there’s no emotional pull from this movie because of its incredibly unfocused narrative.  The film is still very watchable due to its likable characters, however.  But, for adults going to see the film, you may not get as much out of the film as animated films that we get from Pixar.

Despicable Me 3 is just fine.  There’s nothing here that’ll give you the feels or elevate the material to a higher meaning.  However, there’s enough colorful fun from beloved characters to keep you entertained.  It gets a B-.  Kids will most likely love this film with its slapstick nature and fast pace.  So, if you want to get your kids to shut up for an hour and a half, Despicable Me 3 might be the film for you.

Thanks for reading!  What are your thoughts on Despicable Me 3?  Comment down below!

If you enjoyed this article, subscribe to MovieBabble via email to keep up to date on new content.

I enjoyed this one. It does feel a little lacking compared to the first two, for pretty much the reasons you gave.

Well at least you liked it a little!

You should do more Netflix Reviews

There are certainly more coming in the future. I’m working an internship this summer where I don’t have Netflix so there will be less of them until I get back to school in August!

Pretty well said, man. I was thinking about watching, but so many bad reviews….

If you really wanted to see it, give it a try! You’ll get some fun out of it if you liked the first two

Ok, yeah, I think I’d rather see Spider-Man Homecoming ?, you should review it for next post! Just saying

Since it comes out next week it won’t be my NEXT review, but don’t worry, I’ll be seeing it opening night and getting a review out as soon as possible!

In the meantime, I’ll see what I can do for some Netflix Reviews!

Awesome! I’ve been reading a lot on your website, loving it so far

That’s what I like to hear! Feel free to keep requesting new content I’m always trying to adhere to my readers requests!

I have 5 suggestions for your Netflix Reviews:

2) How I Met Your Mother, I know it’s kind of old, but it’s a pretty good show

4)When it comes out, The Defenders

I don’t know if you have done these already but I think they are pretty good and would like to know your thoughts ?

I just came home from the theatre, watched Despicable Me 3, all the people were laughing along the movie. My parents seemed to enjoy it a lot. Overall, I Thought it was pretty good, It is a kids movie after all. It does have a lot of plots tho

Like I said, it’s not terrible! You won’t hate yourself for watching it!