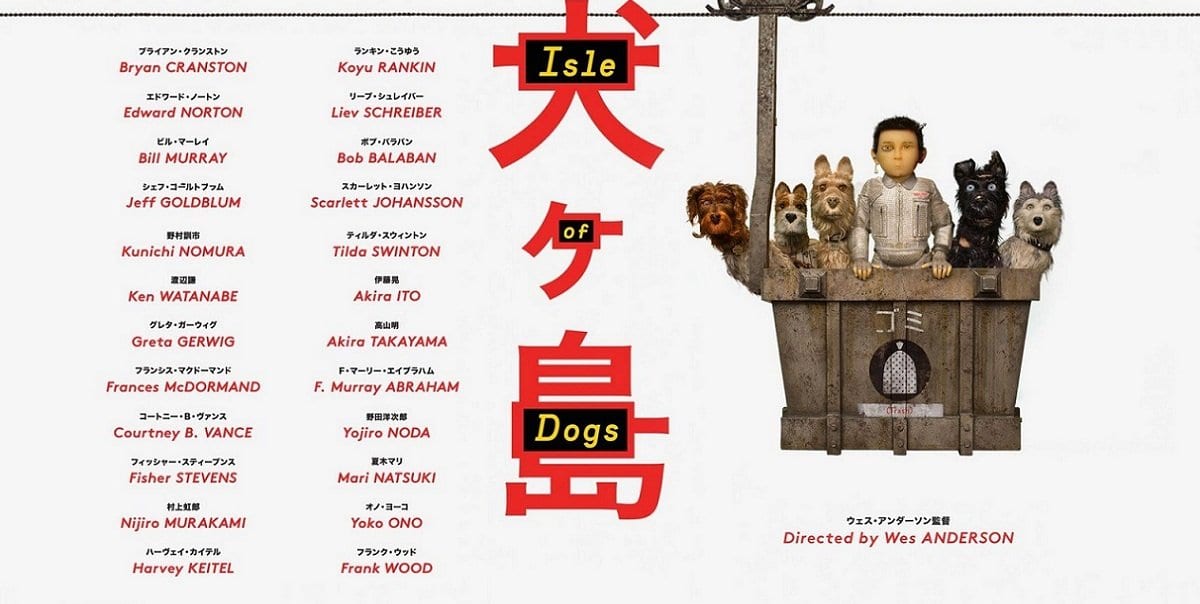 Wes Anderson’s signature quirkiness has already left an indelible mark on the film industry.  In fact, he could probably stop making films right this instant and he would already have left behind a wonderful assortment of feature films.  But, like any normal creator, the creative itch that’s formed over time isn’t one you can scratch very easily.  The notion is even more noticeable in this specific case with Wes Anderson’s next film: Isle of Dogs, a film that clearly took a long time to develop given in its animation style.

Twenty years in the future, canine saturation has led to serious outbreaks of dog flu and other dog-spread diseases through Japan in the city of Megasaki.  Sensing a need for change, Mayor Kobayashi (Nomura) signs legislation that quarantines all dogs on Trash Island off the coast of the country.  There, the dogs are to live out the rest of their days — away from their owners.

However, one day, a pack of dogs led by Chief (Cranston) spot a young pilot (Rankin) as he crash lands onto the island while searching for his lost dog Spots (Schreiber).  The dogs agree to help the pilot find his pet and friend, discovering some secrets of their own on the way.

As you probably know already, Wes Anderson has dabbled in stop-motion animation before in his film Fantastic Mr. Fox, an equally quirky caper where foxes say “cuss” instead of the intended curse word (my personal favorite is “a complete clustercuss”).

After The Grand Budapest Hotel premiered back the early section of 2014, Anderson began work on his next feature which is precisely why you arrived at this article today.  Stop-motion animation is becoming a lost art in the industry these days, mostly because of its time-consuming nature and low box office returns.  However, Fox Searchlight seems to be bucking that trend with a smart release schedule, slowly expanding the film out to new territories to capitalize on the film’s great word of mouth.

Even better, it’s fairly obvious that Wes Anderson has a built-in audience of hipster, art-house-loving people who show up for all of his movies, making a film like Isle of Dogs possible.

Wes Anderson deserves all the praise in the world for creating such an expansive, lived-in world.  While the dogs certainly have their cute moments, they are trapped in the middle of dirt and disease which adds a feeling of grit to their surroundings.  Even the luckiest dogs have a few ticks and diseases, and a trash bag of apple cores and rotting meat is considered an extravagant feast.  Anderson creates a fascinating dichotomy between the layout of the land and the chipper, whimsical nature of the dogs, developing an atmosphere that could only be his work.

Isle of Dogs truly shines on a technical level, proving what years of delicate, labor-intensive work can do for the visuals of the film.  The animation is rich with detail, bringing these lovable dirtballs to life with depth of field that is extraordinary to behold.  Whether it’s piles of rotting garbage or vast cityscapes in a fictional Japan, there’s something oddly realistic about Isle of Dogs — it takes the unbelievable and adds little sprinkles of plausibility to the point where some audience members will leave the theater thinking that Megasaki City is a real location in Japan.  Anderson develops spaces that are so oddly specific (or just plain odd) that viewer appreciation bubbles to the surface at every turn.

More of the Lovable Quirkiness You’d Expect from Wes Anderson

The proper word for most Wes Anderson films is “delightful,” and Isle of Dogs‘ characters are cut from the same cloth as previous roles in other Andersonian films that evoked such a response.  Anderson regulars such as Ed Norton, Bill Murray, and Jeff Goldblum are dogs, which is an amusing juxtaposition on its own.  Let’s face it, listening to grown, dignified men talk in the form of small dogs with names like Rex, Boss, or Duke is lovably silly.

Circular dialogue is all over the film.  Characters talk in circles and speak with the same phrase over and over again in the name of comedy, making even mundane piece of dialogue fanciful and fun.

Anderson loves to collocate instances of absurdism with oddly collected responses.  This idea comes up in most of his films, especially with how characters react to extreme violence and injury.  It’s weirdly meticulous in nature, causing many to humorously express that Anderson has psychopathic tendencies.  Whatever the reason, it’s pretty damn funny, especially when it’s blended with other Andersonian tropes.  And just when you think the movie is going to go overboard, the dogs turn to the camera and wink to put you at ease.

Although Isle of Dogs handles concepts of suicide, poison, and political schemes, it still acts as a warm blanket, easing you into a charming feature.

But, that same nonchalant attitude is where Isle of Dogs gets into trouble, primarily with its depiction of Japanese culture and its people.

Look, I’m sure many of you groaned while reading that last line, and it’s understandable.  Isle of Dogs is harmless enough to the point where individuals will watch it without a single issue, and they certainly don’t want someone getting trigger-happy.  Yet, the problem still exists, and it’s worthy of discussion.

Japanese people in the movie have no subtitles, forcing the film to have translators and/or force the audience to rely on gestures to get the gist of their words.  That in of itself isn’t a problem.  It even plays into the fun notion that dogs can’t comprehend humans, making for some humorous remarks and circumstances.

And yet, as the charade continues, it becomes clear that the Japanese people in the film are foreigners in their own native land, and it’s up to the white people involved in the story to make sure that the movie not only has a revolting force that pushes the status quo rather than accepts it, but that it’s also palatable for Western audiences.  In that sense, the Japanese are transplants in a Western-rendering of their space, and their language devolves into childish, undermining phrases which amount to things as simple as placing an “o” at the end of “biscuit” to create a form of gibberish that is easily understood.

These qualities are clearly unintentional (or at least I sure hope so), so they can be understood if not forgiven, but they still speak to Anderson’s tendency to paint the town white in the name of quirkiness rather than be in tune with the interpersonal dynamics he creates in his films.  The seedier underbelly undermines the seedy, charming exterior of Isle of Dogs, shattering the beauty of this lovely exercise in animation while making Anderson’s tropes painfully obvious.

Isle of Dogs creates an expansive world that is equal parts dirty and whimsical, pushing the craft of stop-motion animation to new heights while forming a distinct milieu that could only be Wes Anderson’s creation.  It’s perfectly symmetrical, idiosyncratic, and downright cute in some instances.  Anderson is doubling down on his aesthetic; you’ll probably know whether or not you’ll like the film before you ever step foot into the theater if you’re a repeat viewer of his work.

But then there’s the less sensitive, probably unintentional undercurrent to this film that shows Anderson’s incapability to totally understand his own material, and it ruins the aura around Isle of Dogs, allowing focus to shift towards the less developed elements of the story.  It won’t be an issue to many, and that’s perfectly understandable, but the issue is there nonetheless.

Thanks for reading! What are your thoughts on Isle of Dogs?  Comment down below!

[…] with You focuses on the story of a young boy named Hodaka who has escaped his small hometown for the bright city light of Tokyo. Unfortunately, for Hodaka, he cannot find work, food, or […]

I have just seen it and loved it. Considering the very dark themes it’s really fun to watch. That’s a clever trick when dealing with corruption, disease and murder/suicide. It’s a very pretty film to watch even with grim subject matter.
I can see why there’s discussion about the language issues and portrayal of the Japanese. There were certainly moments that felt uncomfortable. Anderson’s films are always provocative though. There’s always the odd moment of discomfort. Perhaps there’s an intent to disrupt.

It’s not playing where I live. Which sure sucks for a huge Wes Anderson fan. I’m so jealous of those who got or are going to see it.

That’s such a bummer! I hope it expands a little more for you!

I agree. I think your choice of delightful is right. It is a very cute movie and I loved it. I am ready to see and experience it again. I enjoyed reading through your review.

Great review, couldn’t agree more about what a pleasure it is to see Anderson’s aesthetic applied to the craft of stop-motion, and I personally think his style translates better in that medium than it does in live action. However, I didn’t have an issue with the lack of translation of the Japanese characters; I viewed it as a creative decision to force the team to place more emphasis on visual story-telling rather than relying on dialogue. It may have been a bit of a tone-deaf decision considering the current socio-political atmosphere, but I thought it made for a very unique viewing experience.

Thanks for your thoughts! You’re right in that sense that it’s unique, and I certainly get condemn the film because of that. There’s definitely stuff in here that will keep me coming back!

For sure. I’m excited to watch it again, and I’m especially curious to watch it with subtitles to see what the Japanese characters are actually saying!

I was thinking that exact same thing when I was watching it!