‘Die Hard’ at 30: When Casting Against Type Works 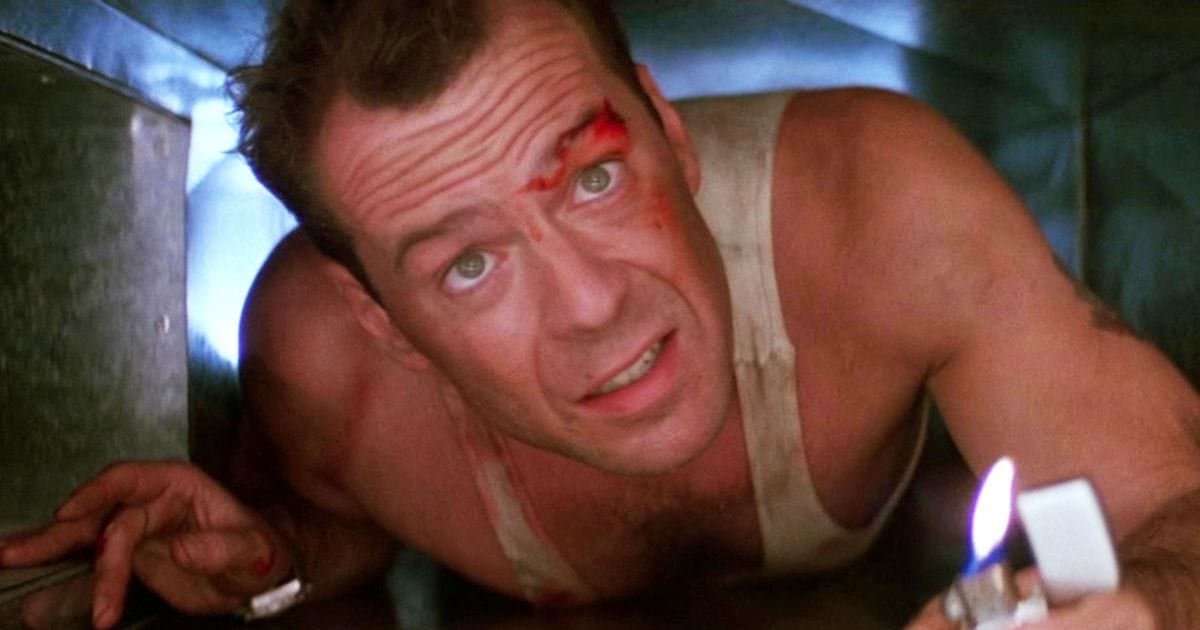 Die Hard (1988) is 30 years old.  Imagine that.  Three decades represent solid proof that it has passed the test of time as an enduring action movie classic.  Thank you, Die Hard, for so many memorable scenes and unforgettable lines.  As the saying goes, imitation is the sincerest form of flattery.  A number of articles have been written that stand as testaments to Die Hard as one of the most imitated movies ever.  Yet none have replaced it.  One of the reasons is that actors are not always interchangeable, and a film’s success can be directly attributed to perfect casting.  At the time Bruce Willis was not considered action hero material.  In 1987 he had starred in one film, the romantic comedy Blind Date (1987).  Let’s explore the evidence for why the ideal casting, even if against type, can result in an iconic screen gem.

Had either Don Johnson, Sylvester Stallone, or Harrison Ford not turned down the role of John McClane, he would have been a very different foil than the character embodied by Bruce Willis.  Here was someone who typified blue-collar.  With Stallone, we wouldn’t have considered it a fair fight: twelve terrorists against one Rocky Balboa. My money is on Sly.  However, Bruce Willis and Harrison Ford do bring some of the same qualities to bear and few have been as adept as Ford at translating charm into a persona firmly followed by fans. Hans Solo, Indiana Jones, and Jack Ryan et al.  Yet Ford would perhaps have been somewhat sophisticated for the role.  I mean, can you imagine him saying “Yippee Ki-yay, mother f____r”?  Could Don Johnson have pulled it off?  I think charisma, of which Willis has an abundance both on and off-screen, makes the difference here.

We remember Die Hard scenes because the funny parts were genuinely funny.  Willis’ comedic timing, nuanced body language, and facial expressions deserve credit for those laugh out loud moments, devices he’d been able to hone for five years on the set of Moonlighting. Consider one of the early examples in the film.  Rummaging through the pockets of a dead terrorist he has violently dispatched, McClane finds a pack of cigarettes and deadpans to the corpse, “Ooh these are very bad for you,” before lighting one up.  I admit that I’m a big fan of Harrison Ford.  For me though, in his funniest moments he appears to ham it up a bit.  You see the acting.  On the other hand, with Willis, he looks like he’s just being himself, so there is no acting to see.  That means being funny is part of the package with Willis.  It’s one of the traits that draws you towards a Robin Williams or a John Belushi, who can just be themselves and make you laugh.

Willis as the Common Man

Willis’ every-man must overcome the challenges in his situation with wit, ingenuity, and will power.  Not with superior ability, but by using his imagination, engaging his survival instincts, and believing that he can succeed.  That’s what those of us sitting in the seats, watching the screen, identify with.  When McClane is crawling through the air ducts guided by his lighter, and with mimicry voices, “come out to the coast, we’ll get together, have a few laughs,” we know exactly how he feels.  Why?  We can relate to finding ourselves in a predicament way beyond what anyone could be expected to handle.  Any regular person in real life, that is.

Look at it this way.  We believe Willis when he portrays a man whose wife left him, so to speak, and took the kids.  She has a job in a career that has a higher status than his, and a much higher salary.  Could you say the same thing about Harrison Ford?  I’ll stop picking on him.  How about Brad Pitt or George Clooney?  I don’t think so.  How about Clint Eastwood, Richard Gere or Burt Reynolds, because those three turned down the part too?  Now the first two are funny guys, believe me.  But not that kind of guy.  Eastwood was as funny as could be in Every Which Way but Loose (1978) and Any Which Way You Can (1980), but it’s not humanly possible for the man with no name to go by the moniker Roy Rogers.  While I could see Gere and Reynolds both outdone by their spouses in the workplace, you also saw them as Playgirl centerfolds.  Need I say more?  It’s all in the casting!

Rickman as an Inspired Choice

But Die Hard didn’t stop with Bruce Willis.  The casting of Alan Rickman to play lead villain Hans Gruber was just as important, and just as antithetical to type-casting because Rickman was an alumnus of the Royal Academy in London and a veteran stage player of Shakespearean classical theater.  Not your first choice for a frightening, modern-day terrorist.  As this was Rickman’s first feature movie role, there wasn’t any proven track record to rely on.

The criminal mastermind in Die Hard needed to reasonably believe he was superior to Willis’ vigilante.  He needed to be comfortable with the idea McClane was little more than a nuisance who would not interfere with his objective.  What Rickman brought to the part was a person capable of both studious intellect and cold-blooded ruthlessness.  The scene that best typifies Rickman’s prowess is the elevator scene.  Not that one, the other one.  You know.  The one where he’s humming a tune alongside a major corporate executive before chatting him up about exclusive men’s fashion.

Willis and Rickman are Dynamic Together

Remember the famous scene between Gruber and McClane, when McClane realizes who Gruber really is and Gruber tries to shoot him with an unloaded gun?  That classic standoff doesn’t happen — it wasn’t even in the script — unless Rickman demonstrates the ability of a flawless American accent.  Remember he’s already a British born actor portraying a German who delivers lines of fluent German dialogue at various points.  Rickman was unknown to me at the time. I was convinced he was a German actor and I’d lived in Germany for two years!  That initial face-off between Gruber and McClane was key to helping raise the tension in the final climactic scene where McClane must expose himself to save his wife Holly (Bonnie Bedelia) whom Gruber has taken hostage.  What am I saying?  It’s an entirely different movie without Rickman as Hans Gruber.

We root for McClane because Willis tries so damn hard.  Then we root against Gruber because Rickman is so good at getting us to.  Watch McClane plead with Gruber not to harm Ellis while Gruber counters by not even counting to three before killing him.  Later McClane pleads with him to have mercy on the police officers in the SWAT vehicle.  And again, Gruber is merciless.  That’s the set-up Rickman and Willis have beautifully mounted for the cataclysmic explosion in the Nakatomi Plaza. One huge boom that still holds its own against all the CGI special effects blow-em-ups which have tried to outdo it ever since.

Regardless of the results, it’s not wrong for so many filmmakers to borrow from Die Hard and make something good or profitable or both.  We movie fans often win as a result.  Whether its Under Siege (1992), Cliffhanger (1993), Air Force One (1997), or my favorite Speed (1994), there’ve been some pretty decent knockoffs.  Heck, Die Hard has four sequels of its own.

What contributed to their successes?  The casting.  The pairing of the talented Tommy Lee Jones’ William Strannix against Steven Seagal’s ex-Navy Seal Casey Ryback.  Saying that Seagal doesn’t act is not the same as saying he can’t.  But Tommy Lee Jones steals the movie because he remembered to bring the humor that Rickman and Willis laced Die Hard with.  The formula in Under Siege (1992) seemed to be what Cliffhanger (1993) was employing with John Lithgow’s gang leader Eric Qualen pitted against Sylvester Stallone’s Gabriel Walker.  Perhaps even more of a mismatch came with the arrival of Dennis Hopper as the mad bomber Howard Payne whose pop quizzes were too much for Keanu Reeves’ Officer Jack Traven in Speed (1994).  My award for high-powered casting goes to Air Force One (1997) with Gary Oldman as hijacker Egor Korshunov, going toe to toe against the POTUS — Harrison Ford aka President James Marshall.

Yet as good as Oldman and Ford were, Air Force One cannot get us to forget what Hans Gruber and John McClane have given us: just the right actor for the role.

Thanks for reading! What are your thoughts on Die Hard and perfect casting? Comment down below!

[…] Birdcage is one of my favorites because of the departure it takes from his normal roles. Of course, the rest of the cast really makes the movie, particularly Nathan Lane and Gene Hackman. […]

[…] Ed Helms (Coffee) and Terrence Little Gardenhigh (Kareem). Variations of this involve 48 Hours, Die Hard, and more. It was a similar tactic used for Steven Spielberg’s, Ready Player One, which also […]

[…] of the main reasons I love this Tom Clancy adaptation so much is because of the casting. Alec Baldwin as Jack Ryan seems odd at first but ends up paying off quite well. The Scottish Sean […]

This movie is CLASSIC! And I love Speed! It’s so underrated!

Speed was a real nail-biter!

Excellent analysis! I enjoyed reading it.

Very pleased to know that!😏

Yikes, thirty years! Thanks for a very fine retrospective.