I Hate the Characters in ‘The Birdcage’ 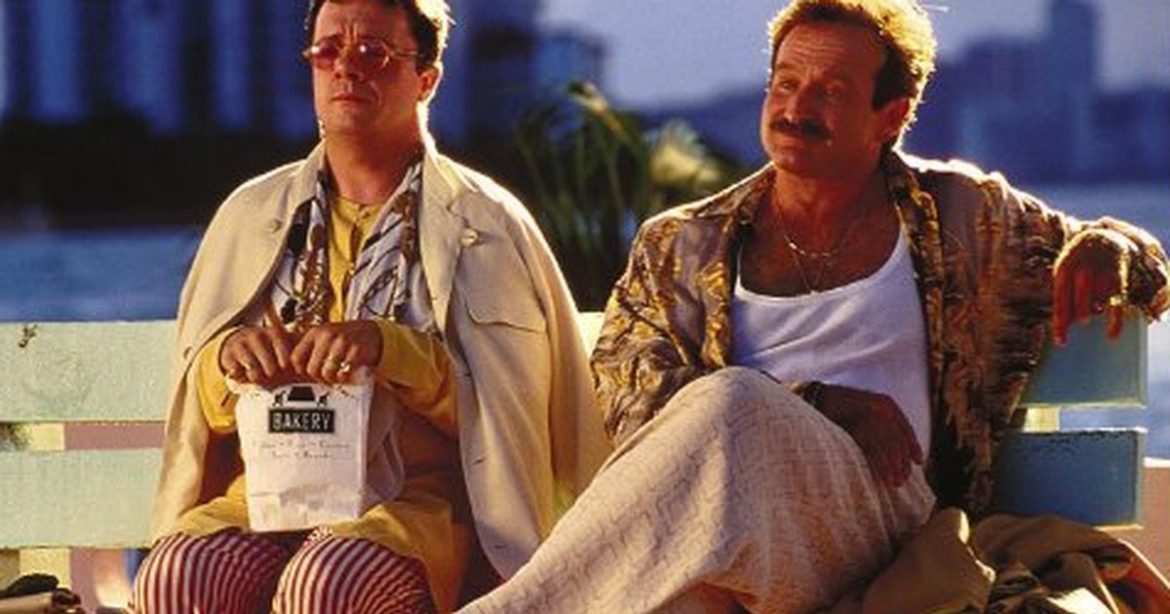 I’m a sucker for a good Robin Williams flick. The Birdcage is one of my favorites because of the departure it takes from his normal roles. Of course, the rest of the cast really makes the movie, particularly Nathan Lane and Gene Hackman. And I really love the sweet look at a homosexual relationship.

Let’s start with the character I hate the most: Val Goldman. Val is the son of Armand (Robin Williams) and Albert (Nathan Lane). One night, he comes home with news: he is getting married at the young age of 20.

I have no problem with him getting married. What I do have a problem with is the way he treats his fathers. He literally asks them to hide their homosexuality to appease his new in-laws. As appealing as that option would be, it’s such a horrible thing to ask someone to do. He even seems annoyed at certain points that his fathers are not hiding who they are.

I understand that the ruse Val forces his fathers to perform is the whole plot and humor of The Birdcage, but it always makes me feel uneasy.

I actually really love Albert most of the time, but sometimes he is just way too dramatic, which is the point of the character. He flips out over the smallest things. The opening scene where he refuses to go on and perform his show as Starina is a good example. He bellyaches about his appearance instead of just letting the show go on. It inconveniences the rest of the cast and causes unnecessary stress for everyone else.

Not to mention he is an extremely jealous person. Of course, there are moments when his jealousy is warranted; however, those moments are few and far between. He’s just so over the top and needs to chill out. Maybe take one of those “Pirin” pills from Agador (aspirin with the label scratched off).

I actually quite like Armand’s character in The Birdcage, but he can be a bit rude sometimes. He tends to yell and berate when he should be a little more loving. I especially hate how he reacts to his son wanting to get married at such a young age. He reacts with disappointment and reluctant acceptance. It seems out of character for a man who is living an alternate lifestyle himself; it’s ironic, honestly.

Yet, that anger serves him well when he’s teaching Albert how to be “manly.” His stern instructions on how to smear butter on toast are hilarious. All in all, it makes his character more interesting but it bothers me.

The guy is a douchebag and the villain of the movie. Need I say more?

I will say that one of my favorite character trait of his is him eating candy when he’s stressed. Very relatable.

Louise Keeley isn’t as bad as her husband, but she’s up there. She has the same bigoted ideas, even if she tends to push hers down a bit more. I do appreciate how willing she is to just go with the flow, especially in the end when the Keeleys have to escape the nightclub.

Yet, her annoying character flaw is how passive she is. She doesn’t really stand up to anyone, other than taking candy from her husband. Like I said, she goes with the flow — sometimes a little too much.

However, I will say that she is probably one of my favorite characters because of her naivete. Naïve characters have a soft spot in my heart because I, too, am a naïve character.

Barbara started out as a sympathetic character but she threw that all away in the end. She had no problem with Val’s parents or lifestyle, so she seemed like the perfect candidate to join the family. My respect for her decreased slightly when she lied to her parents about who Val’s parents were. The lie makes the movie, but it just is so infuriating how far she lets it go.

However, the worst part about her character is what she does in the end. Once her parents find out the truth about Val and his family, she doesn’t fight back at all. Instead, she just offers a pathetic apology to Val and follows her parents out of the nightclub. Of course, this is resolved at the end of the film, but this moment reveals a lot about Barbara’s character — she’s spineless.

I actually really like Agador’s character and don’t see a lot of flaws with him. Sure, he can’t walk in shoes and he can’t cook, but he is funny as heck. Agador is by far my favorite character in The Birdcage.

Don’t Get It Twisted

Before you start to think that I hate The Birdcage, let me reiterate that I really love it. It’s hilarious. Robin Williams and Nathan Lane work surprisingly well together; their over-the-top personalities complement each other perfectly.

That doesn’t mean that I think the movie is above criticism, though. As funny as the characters are, I can tell you that I would never want to meet any of them in person. Val is a jerk, Albert is a drama queen, Armand is rude, Senator Keeley is a bigot, and Barbara is spineless. Irritating personalities sure make for a great comedy though!

Thanks for reading! What are your thoughts on The Birdcage? Comment down below!

Umm… Barbara and Val totally got married at the end of the movie. Remember the drag performer declaring, “Bob Dole is gorgeous” at the wedding?

I must have missed that part. Is it post-credits?

‘Harry Potter and the Half-Blood Prince’ is a...