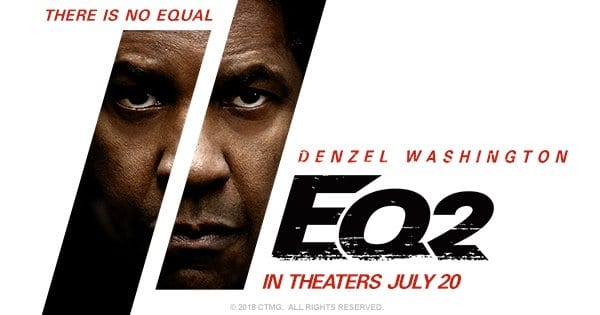 2014’s The Equalizer was a quiet hit, earning just under $200 million for Sony, certainly no small feat. Still, it was pretty surprising to see Sony green light a sequel, during the prime summer blockbuster season no less. I guess when you have Denzel Washington by your side, anything is possible. He even carries The Equalizer 2 to “watchable” status, yet everything around him has its issues.

Robert McCall (Washington) is up to his usual actions. Acting as a guardian angel for the less fortunate in his community, McCall still hopes for the best in everyone he comes across, including Miles (Sanders), a local boy who gets wrapped up in the wrong circles.

Keeping his very existence close to the vest, McCall doesn’t have many that are close to him, but when his only friend Susan (Leo) is tragically killed, he’s forced back into action to take vengeance against those that committed the terrible act.

You don’t need me to know that Denzel Washington has had a pretty historic career. Two Oscar wins and plenty of amazing starring turns, Denzel has done it all, and he’s probably one of the few bankable stars left in today’s Hollywood.

However, funny enough, The Equalizer 2 marks the first time in Washington’s career that he has ever starred in a sequel. Imagine that!

This news raised a few questions for your truly. Mainly, why would he choose his character in what is now the Equalizer franchise to start starring in sequels?

But then I took a look through Washington’s filmography once more, and it’s pretty obvious why this is the case: Denzel Washington lives for prestige movies. Think of all of his characters. From Alonzo in Training Day to Malcolm X in the movie of the same name to even Troy from Fences, Denzel has never taken a role where there was ever a possibility to continue on with the character. So even if The Equalizer 2 may seem a tad generic (and I’ll certainly allude to that fact in this review), it’s still quite an inventive situation for the lead actor.

If you ask me, Denzel Washington is the ultimate presence on screen. He elevates mundane dialogue and familiar setups with amazing diatribes and soul-seeking glares that resonant immediately with the audience. To this day, I still haven’t witnessed an unwatchable Denzel movie because he’s always worth the price of admission. The Equalizer 2 offers more of the same in that regard.

Washington is just so damn infectious as Robert McCall. This film is one of those classic star vehicles — it’s all about the star in every single scene, but the star is so great in this case that the movie somehow gets by. Washington is absolutely chewing the scenery in every scene, commanding your attention in any way possible. He switches it up from scene to scene. Sometimes he’s the loudest man in the room, pointing a gun in his counterpart’s face. But then, in the next scene, he’s subdued, getting close to tears. No matter what choice he makes, it always seems to work.

The Equalizer 2 will work for many moviegoers simply because Denzel masks a lot of problems that it has. It has one of the best living actors who still looks believable as an action star — that’s all many will need out of this movie.

The Equalizer 2 Has Sooooooo Much Fluff

Still, a lot of editing work could have made The Equalizer 2 much more than another reason to love Washington. There’s a good movie in here somewhere, or at least a perfectly acceptable film diversion.

The movie is so invested in showing what a great influence Robert McCall is in his community that it forgets to do one very important thing: tell a cohesive story. For the first hour, the attention paid to the central plot is extremely limited. We’re left to watch Robert McCall do nice things for random people in his neighbor. Granted, the film could have resorted to more despicable actions in that time, but we already know from the first film that McCall acts as a watchful protector for those that deserve it — why do we have to rehash these beats? Isn’t the point of a sequel to dive deeper into characters, to peel the layers of the onion that makes those people unique? The Equalizer 2 doesn’t think so.

Sure, The Equalizer 2‘s heart is in the right place — we all probably need to see more of people acting nicely due to their moral code — but it doesn’t make for an incredibly convincing movie. Realistically, Antoine Fuqua could have turned in a 90-minute cut of this film and it would have worked much, much better.

Nothing New to See Here

Antoine Fuqua is a really talented director. All of his movies are incredibly slick and well-produced. He elevates a lot of his scripts, which is also one of his main problems. He chooses rather benign stories, forcing him to dress them up with great production value. I must say, he’s an impeccable stylist, which is why I want to see him find a great script in the future. We saw what happened when he had an average script with which to work…that project turned into Training Day.

The Equalizer 2 has solid set pieces — which culminates in a rather clever setup for a third act finale — to go along with some pretty solid performances from an overqualified cast, but its stock script doesn’t exactly know what to do with any of its stronger aspects. It’s destined to become a passive watching experience on FX down the road, not a great theater viewing experience.

There’s so many aging vigilante thrillers these days, and honestly, The Equalizer 2 is already blending in with the crowd. We’re forced to wait for sixty minutes until the plot really kicks in, and from there, it devolves into a broad, gritty thriller. Everyone involved is better than this. The final product screams “wasted potential.”

Solidly acted and directed, The Equalizer 2 has all the makings of a solid sequel but squanders it on a plot that never quite gets on track. While it’s nice to see Denzel help out random individuals purely out of the kindness in his heart, it makes for a laborious viewing that detracts from the power of the central plot.

I’m against fan edits of films for the most part, but The Equalizer 2 would seriously benefit from someone removing large chunks of its narrative. I don’t know about you, but a standard vigilante thriller should not clock in at two hours and nine minutes.

Thank you for reading! What are your thoughts on The Equalizer 2? Comment down below!

Great review! I think our reviews of the movie line up pretty well. I thought the action was pretty great and Denzel was unsurprisingly brilliant, but the story was too conventional. Please check out my review (https://www.youtube.com/watch?v=SeM2YoKdMdI) and let me know what you think.