Campfires, Scary Stories, and the Moody Mastery of John Carpenter’s ‘The Fog’ 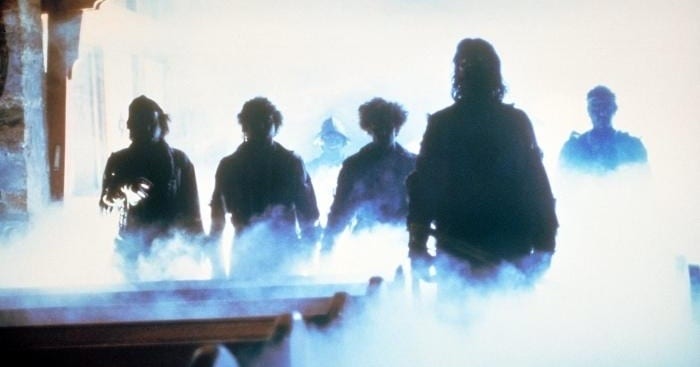 Picture this: You’re camping with some friends down by the beach. There’s no TV, the ice-cream isn’t the same, and the rock you’re sitting on is unbearable. It’s cold, wet, and the only source of light illuminating the ghostly shore is the small fire raging on in front of you. Yet, you love it. A pocket watch glistens against the campsite, slowly spinning its hypnotic spell, as each individual tick remains the only sound filling the gaping air, until — SNAP! — the old man abruptly shuts it. The noise is deafening, a bird whistles in shock, and Mr. Machen’s proclaims the following: “11:55, almost midnight, enough time for one more story…”

You will never forget his story, just as I have never forgotten this film. February 8th was the 40th anniversary of John Carpenter’s coastal masterwork, The Fog. Let’s celebrate!

Following the unforeseen success of Halloween, the lives of Carpenter and co-writer Debra Hill changed forever. After initial responses were pretty shaky, they couldn’t possibly predict that their small-town slasher would rake in a staggering profit and garner worldwide critical appraisal. Then, while on-set for Elvis, Robert Rehme from Embassy Pictures approached Carpenter for a two-picture deal, and then it truly kicked off. The Fog was born.

In The Making of The Fog, production designer and co-editor Tommy Lee Wallace revealed that for their second outing, it was evident from the beginning that Carpenter and Hill wanted to sheathe their kitchen knives and opt for an “old-fashioned ghost story” — and boy did they succeed. Telling the tale of concealed crimes and the relentless act of vengeance, The Fog follows a wave of unearthly terror that befalls the citizens of Antonio Bay as they prepare for the centenary of their quaint coastal town.

Whenever I think about this ghoulish delight, the story of its production springs to mind. As a young filmmaker, it’s one of the most inspiring acts of initiative that I’ve ever heard. It genuinely speaks to the power of filmmaking and the “nothing else matters” importance of storytelling, yet, the story itself is tremendously simple. While editing The Fog, the biggest nightmare for any horror project came to life: the film wasn’t scary. The budget certainly went to good use — Carpenter and Hill’s sighting at Stonehenge (a visual inspiration for the film) made for the ideal moodsetter in a “gather around the campfire!” tale — but the scare-factor wasn’t there. Nothing to garner the shrieks that Halloween populated across the globe. What now? Facing an impending deadline and a flurry of creative angst, Carpenter did the only thing possible: he wrangled his team together and fixed the damn film.

Carpenter is unquestionably a titan of the industry. I’ve barely made a dent in his filmography, yet I’ve already found an abundance of moments that linger in my mind, and an approach to filmmaking I deeply revere. To call The Fog an underrated entry in his oeuvre might not be the most accurate statement, but it has definitely sunk under the radar compared to his other works. What a damn shame. Unlike Halloween and The Thing, which cover close proximity in the exploration of their horrors, The Fog — while still achingly claustrophobic –expands outwards; jumping back and forth between different locations across the Bay as the townspeople scramble to defend themselves against the amorphous curse that emerges from thin air.

While the entire ensemble deserves accolades, what’s particularly striking about The Fog, especially given the time of its release and the typical characterizations we’d come to expect, is the agency of the female protagonists, which certainly goes accredited to the work of Debra Hill. Most notable is Stevie Wayne (Adrienne Barbeau); a single mother who runs the local radio station in the lighthouse. She serves as the central communicative force in the film; instead of playing helpless victim, she utilizes her position to advise the citizens on where to locate as the threat continues to loom large. Her thrilling sequence atop the lighthouse (which was one of the key reshoots during post-production!) remains one of the most impactful; the concept of The Fog without it is too much for the heart to bear.

“We love to be scared”

Speaking on the titular threat, Carpenter stated that “there’s something more frightening when you can’t personify evil” which ultimately serves as the mythos of The Fog. While the murky air brings forth the crew of the Elizabeth Dane, a clipper ship sunk by the six founders of Antonio Bay, it’s the engulfing bank itself that terrorizes far more than the murderous sailors. How do you escape it? Herein lies its haunting effect. However, what The Fog tackles better than the majority of horror films I’ve seen is the joy of being scared. It’s the roller-coaster effect of the cinematic world; an act of pure terror that in some messed up way, you enjoy. Those who have been whisked away by the gruesome bliss of the genre know that wonderful (and equally detestable) feeling when a film scares the living shit out of you. You love it.

In The Fog, no moment captures that feeling quite like the opening scene. John Houseman opens the film with “one more story”, which Andy later reflects on with such fondness. The kids look terrified, but they’re brimming with pleasure inside. Mr. Machen looks glum, but he’s brimming with pleasure inside. It’s important that neither party express their true feelings, because both Mr. Machen as storyteller and Stevie’s son (and co.) as listener are too engrossed in the other to break the spell. It’s a vital sequence that not only forecasts the rest of the film by literally explaining the history of Antonio Bay, but it also subtly captures the relationship between filmmaker and audience in the realm of horror cinema; a natural development from the on-screen nostalgic hit of those days at summer camp. Carpenter’s score is the icing on an already polished scene, with each short burst of the piano drawing you further into Machen’s alluring story.

140 years ago, on the 21st of April, a crime was committed. The past has returned to shore for their justice owed. 40 years ago, on the 8th of February 1980, The Fog was released. Give it a watch tonight; sink deeper under the covers if you have to.

Thanks for reading, and listening! What are your thoughts on The Fog? Comment down below!