An Analysis of Lady Bird from the Sacramento Perspective 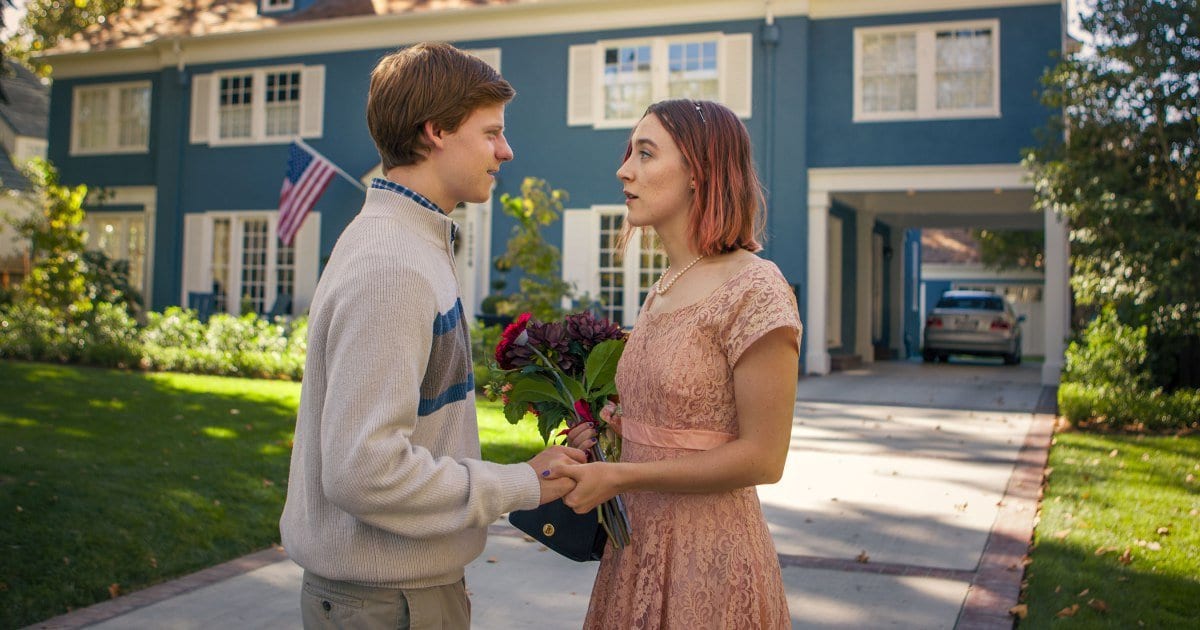 The city of Sacramento, California has been proud of itself during Academy Award season before. Mostly because stars such as Jessica Chastain and Brie Larson hail from here… oh and two-in-a-row winner Tom Hanks briefly went to college at Sacramento State (we are still all about that). However, nothing can compare to the local hype surrounding Lady Bird. If you live in Sacramento, or close enough to watch their local channels, you know of what I speak. There are billboards in town congratulating Lady Bird on its nominations, with “#SacramentoProud” on them, and writer/director Greta Gerwig’s parents had pins made that say “I (heart) Lady Bird,” which they passed out at St. Francis Catholic high school (which she attended).

So, being a native Sacramentan, I decided it was about time to see the movie: A. To find out what all the fuss is about, B. To tell those of you outside the area how relatable/accurate (or not) it is, and C. Maybe I felt a little guilty that I hadn’t seen it yet. Maybe.

In some ways, the story could have taken place anywhere. The themes of mother-daughter tensions, high school, relationships, growing up, and the need to escape monotony are all at least somewhat universal. The imagery, on the other hand, is purely a love letter to Greta Gerwig’s hometown (in fact, she called it that at the Tower Theater premiere).

There is “B-roll” type footage sprinkled throughout that immediately gives anyone from the area a giddy blast of recognition, as though someone they know is on screen. I think this is the main reason the local press, and much of my Facebook feed, is obsessed with this movie. It’s that familiarity that almost makes you feel like you had something to do with the making of the film. Or, at the very least, the feeling that someone other than you grew up thinking similar thoughts in the same town.

Honestly, I think the most impressive thing in this film, to me, was the accent Saorise Ronan used as Christine “Lady Bird” McPherson. None of Ronan’s natural Irish brogue came through at all. It didn’t sound like any accent to me, which probably means she nailed mine perfectly. At least that’s how I think it works – where we come from would sound natural to us, everything else is an “accent.”

Lady Bird’s father, Larry, sounded so much like my acting teacher from college, I actually thought it was him for a moment (they even have a very similar profile). The actor, Tracy Letts, is from Tulsa, Oklahoma. So, safe to say he wouldn’t have a Sacramento accent normally, either. Dialect coach Kate Wilson did an amazing job here, because pretty much everyone sounded right.

That big blue house with the white shutters that Lady Bird and Julie (Ronan, Beanie Feldstein) stare at? It’s very real. And yes, pretty much half the town shared in Lady Bird’s fantasy of living there. East Sacramento, the area in which the house is located, was the pipedream of many who lived “on the wrong side of the tracks,” as Lady Bird and I both did. East Sacramento is filled with old money, and doctors who work at the surrounding hospitals: Sutter, Mercy, and UC Davis Medical Center. In fact, it was my family’s tradition to drive around there during the holidays, to look at decorations and talk about how cool it would be to live there.

Saying you live in, “the lower forties” (which Lady Bird falsely claims to “popular girl” trope classmate Jenna), is essentially shorthand for, “we have money.” The character responding that she lives in Granite Bay is saying she likely lives in a mansion (which she does), has a trust fund, and maybe a pony or five. Let me summarize: East Sacramento/The Fab Forties (so nicknamed because the street names are numbers in the 40s). Let me summarize: East Sac/40s is where you go when you have a successful career; Granite Bay is where you go after winning the lottery (or while playing for The Sacramento Kings).

Near the start of the film, Lady Bird’s mother (the remarkable Laurie Metcalf) says, “… with your work ethic, just go to City College, and then to jail, and then back to City College.” As someone who attended City College for several years and worked on the school newspaper [and therefore heard some stuff], I can tell you that was pretty accurate. No offense to the school where I earned my transfer requirements with no debt, and where I met half of my friends list, but… yes. Many of the students (myself included for sure) had little to no idea what they were doing with their lives.

Also, Lady Bird’s anger at getting accepted into UC Davis, because she doesn’t want an agricultural career? That is also pretty spot on. Their sports teams are actually called the Aggies. No, really. That’s the school you go to for any animal-related field: veterinary, zoology, marine biology… you get the idea. It’s a great school (and not that easy to get into, by the way), it’s just not for everyone. Especially if your desire is to get more than 15 minutes away from home.

That Guy You Meet

Speaking of my time at City, Kyle (played by the also much-hyped Timothée Chalamet), is basically the guy you meet in a Philosophy class during your first semester. I’d love to say he was too extreme to be real, but that would be a lie. He’s pretty much every guy at City who is in a band and plans to transfer to Berkeley (where Lady Bird’s brother and his girlfriend went, as it so happens). Kyle also serves as the I’m changing to be like him “bad boy” for Lady Bird, a type of character that seems to pop up in every coming-of-age film, and many movie musicals. Lady Bird undergoes a drastic persona shift in an effort to impress him. It’s quite sudden and jarring; however, for her age group, it’s realistic.

Side note: I’d like to tell you Kyle’s use of the phrase “hella tight” was inaccurate for a film set in 2002. Really, I would. But, hand to God, castmates of mine in a Sacramento-based musical theater group were still using it regularly (read: ad nauseam) in late 2004.

The Ending Got Me

Overall, the movie made me a bit emotional; however, Lady Bird’s last lines legitimately made me cry. She was asking her mother about driving through Sacramento for the first time, and they were showing images of the city on screen. That’s when it hit me: I wasn’t so much moved by the film, as the nostalgia. As the end credits rolled, I wanted to get in my car and drive from Lincoln (the suburb I live in now), to my old stomping grounds. To East Sac, City College, downtown, maybe even my old “wrong side…” neighborhood. Does that mean it was a good movie? Or does it just mean I’m as sappy as all the people in my hometown freaking out about this movie?

Honestly, I can’t really be sure. I think the movie is enjoyable enough, but the big payoff is a new appreciation for home.

Thanks for reading!  What are your thoughts on Lady Bird and its ties to Sacramento?  Comment down below!

'Music' Is Irresponsible, Embarrassing, Offensive, and Horrifically Out of Tune | MovieBabble February 1, 2021 - 5:42 pm

[…] in this film. You think she would be because to quote Beanie Feldstein’s character in Lady Bird: “It’s the titular role!” But Music is less of a character and more of a hot […]

[…] scene to effectively wrap things up, the last shot of the film isn’t a fitting conclusion. It leaves you wanting more without giving enough to […]

I lived in Midtown Sacramento from 1989-1994, so have a special fondness for the city. It was wonderful seeing a few scenes from the River City.

The Club Raven sign was my favorite. I’ve always loved it.

Having never been to Sacramento (I’m from suburban Vancouver-area), I absolutely loved Lady Bird. It was such a REAL film to me and I felt like it perfectly captured my life at that age and in that way, I assumed it was just so universal. So it was interesting to hear how part of what you found interesting in it was it’s Sacramento-specifics! I guess it’s a testament to how good a film it is that it works on both levels. :)

It’s nice to hear your perspective, as well. :) It was very real. I really enjoyed Gerwig’s writing style.