Get Lost in the Images of ‘Stalker’ 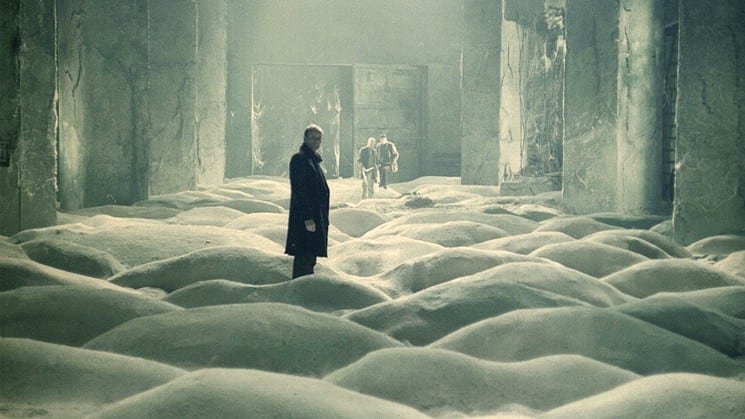 Watching Andrei Tarkovsky’s Stalker is like being transported to another dimension. With its extreme long takes and naturalistic feel, five minutes of runtime can feel like twenty, but twenty minutes of runtime can also feel like five. Rarely does one encounter such a mesmerizing, dreamlike experience — I guess that’s why many hail Stalker as one of the best Russian films.

Stalker revolves around a mysterious area called “The Zone”. Its origin is unknown, but it is said to have a room at its center (not-so-creatively called “The Room”) that makes one’s desires come to life. So when Stalker (the name given to the man who navigates eager individuals through The Zone) leads two men known as The Scientist and The Writer in their journeys to this mysterious land’s core, you often feel like you are pulled in with them, experiencing the same levels of disorientation. Tarkovsky’s images operate as a black hole: they suck you in the moment you’re in the vicinity. There’s no escaping them.

Stuck in a Brown Haze

The first sequence, detailing the trio meeting up and eventually evading law enforcement as they make their way towards The Zone, is perpetually brown. The brown haze has a lingering effect of oppression. Not literal oppression, but that of the human spirit. There’s an element of grit to the air that looks heavy, like it’s weighing every character down as they walk through the streets with their slouched shoulders. The bar the three men meet in to begin their voyage is almost hilariously bleak. One standing table is off to the side, while the rest of the foreground remains bare. You can get a great look at the floorboards, which look encrusted with dirt and mold from beer. Escaping to The Zone looks like a pretty good idea, all things considered.

What follows is an odd little game of cat and mouse between the three men in a humvee and the law enforcement on patrol in the area surrounding the guarded entrance to The Zone. If you look closely, you’ll realize Stalker is driving in near circles, hardly gaining ground. Spatial awareness is also fairly muddled. Exactly how far away are they from the entrance? Where did they start? Where are the guards in relation to them? Was this all laid out beforehand? Is Tarkovsky secretly a hack? (Answer: no.) But if you’re anything like me, you hardly notice at all on the first viewing. Stalker already has you in its clutches.

One choice made clear from the start is a strong echo accompanying every sound. Just about every setting in Stalker is shot in deep focus, so the terrain, with a lack of any extras walking around, is expansive and cavernous, and also entirely unwelcoming. Although Eduard Artemev’s score is a perfect addition to a scene any time it is used, the billowing echoes drive the dreamlike sensation the film emits. They’re loud enough to catch your attention, but not distractingly so. Enough to suck you into all of Tarkovsky’s poetic imagery and languid pacing. If you’re not on board with Stalker‘s sense of tempo from the start, it has a way of quietly but forcefully lulling you down to its frequency.

After that awkward chase, the men sneak by the checkpoint area behind a cargo train, evading a small hail of gunfire, then procure a railcar and ride on the train tracks into The Zone. What follows is the best example of Stalker creating a dream state.

The Writer asks Stalker if the guards will catch up to them on the railcar. Stalker quickly refutes it, saying, “they fear it like the plague.” Then, the group goes through the rest of the ride in silence, staring off into the distance as they pass by the depressing landscape. Tarkovsky and his cinematographers shoot the scene in one long close-up, occasionally shifting focus from their faces as they turn to look what’s coming and what they pass by to the brown mist on the horizon.

Only this time, the sound design and score work in tandem. From the start of the ride, the only sound is the constant clanking of the railcar riding on the track. A rhythm is created by two pairs of clanks. After thirty seconds or so, the metal clanks have the effect of a hypnotist’s metronome. The score later comes in to distort the clanks of the track as the group gets closer to the beginning of the Zone, indicating they’re voyaging into a strange land unfettered by natural laws. It was at this particular moment I thought I had been watching the same scene for over thirty minutes.

The ride is topped off with a Wizard of Oz-esque change to color as we reach The Zone. Except, instead of entering a world of endless fantasy and charm, we know The Zone is less than hospitable. A perfect inversion of the emotions we typically associate with a shift from the monochromatic to the colorful.

The overgrown industrial wasteland that is The Zone then takes those techniques utilized before and adds curious editing choices to the mix. While the team may only be walking through a tunnel one-by-one, the long takes followed by disjointed reaction shots add a strong sense of confusion. Stalker also smartly lays out the dangers of each part of the trip, so although nothing may happen in a given scene, the idea that anything can happen is powerful enough on its own. Long conversations feel even longer, and you fall further into Stalker’s naturalistic hallucinations.

Time movies differently, but the exact rate is hard to discern. So is everything else. Unlike movies that later copied the template Stalker codified for this particular brand of contemplative science fiction — Alex Garland’s Annihilation is a very clear example — none of the scenes have a clear visceral flair. There are no kaleidoscopic images of death or demon bears roaring with the sounds of human screams (thank god, it’s too much to handle). Instead, Tarkovsky’s subtlety keeps you off balance. I may or may not have had long stretches while watching Stalker where I barely moved an inch.

The group is a mess as they leave The Zone, for reasons I’ll keep vague here. They’re exhausted, both physically and spiritually. No character leaves The Zone unscathed, nor did I.

Thank you for reading! What are your thoughts on Stalker? Comment down below!

[…] so freewheeling and it really doesn’t care where it goes next; it is simply happy to be lost in the scenery. We are taking a journey alongside Cheryl (Witherspoon) in her grief over a recent […]

[…] the documentary footage and the reenactments while it plays. The cinematography is also very naturalistic; the film moves between the two formats seamlessly in that […]