Remembering Jerry Stiller: Why are We So Connected to Comedians? 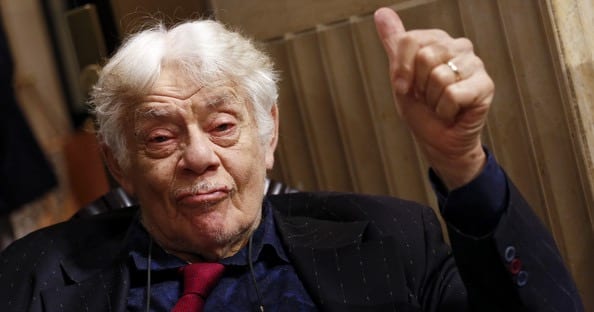 Yesterday morning, it was announced that Jerry Stiller had passed away. Upon hearing the news I felt sad. But why? I’ve never met Jerry Stiller. He’s not a relative of mine. We’re not personality connected, though the six degrees of separation (Bacon) theory would argue that I am to a certain degree. This got me thinking, and questioning: why do we mourn?

As an avid Seinfeld fan, Jerry Stiller has been a part of my life for my entire life. So, while I have truly never met him, he’s been an influence on my life. Primarily, he’s a man who makes me laugh. Frank Costanza has some of the most iconic Seinfeld bits, and his character is never a disappointment. Stiller’s death also got me thinking about other celebrity deaths. I still remember exactly where I was and what I was doing when I found out that Robin Williams had died. The same goes for Carrie Fisher. Again, I’ve never met the pair of them. So why did it hurt to find out that they had passed?

I think what it comes down to is the fact that comedy is not only raw, but almost entirely about connection. What makes a comedian’s material funny is the fact that it can relate to our experience. It also helps that comedic performances are some of the most genuine, particularly stand-up. When a comedian makes a joke, they are normally the butt of it. There isn’t a dramatic face for them to hide behind or a character to take it for them, it is just their disheartening observation about their own experience.

I think we mourn celebrities, comedians especially, because they help us learn about ourselves. They willingly stand up and say “here’s what I struggle with”. Some of them are blunt, like Carrie Fisher. Others use funny voices, like Robin Williams. Some heighten their emotions and raise their voice, like Jerry Stiller. But at the end of the day, they’re all doing the same thing. Comedians help us rationalize the world around us. They take things that don’t make sense, that aren’t fun, and that often hurt and make light of them.

The entire career of a comedian is predicated on their ability to relate to us and to make a connection. They cry so that we can laugh, and we laugh so that they too can feel that they aren’t alone in their experience. There’s a unique bond here that we don’t normally form with other types of entertainment. Sure, other entertainers make us feel but with a comedian, the connection is much more intimate. So whether you’re reading their words on a page, watching them set up punchlines on the stage, or watching them land their marks on camera, you’re connecting personally to what they are saying. It’s almost as if they’re saying it just for and directly to you.

In the case of Jerry Stiller, he often taught me that it’s okay to go a little crazy sometimes. Sometimes “serenity now” doesn’t quite work, and over the top is the only way to go. Jerry Stiller taught the world that sometimes it’s okay to have grievances, to feel like molehills are becoming mountains, and to just let loose.

So no, Jerry Stiller didn’t have a personal connection to me, but through his work, I have a personal connection to him. I’d wager that many are feeling the same way, and that many feel that way whenever a celebrity dies. It’s a beautiful thing for someone to dedicate themselves to a career as an entertainer because they’ve dedicated themselves to us, the common people, who just need to feel like someone else gets it.

Thanks for reading, and listening! What are your thoughts on Jerry Stiller and Comedians? Comment down below!

I’d say this applies to other celebrities as well and not just comedians. Actors, authors, politicians, and even sports figures can cause us to mourn and remember where we were when we heard of their deaths.

Stiller–with his work on Seinfeld and King of Queens–is the prime example of the writer and actor in perfect sync. The writing on both shows was stellar, but Stiller brought it to a whole new level.

How many times my friends and I have used, not only “serenity now,” but “You wanna piece of me? You got it!” over the years.

Beautiful. Just beautiful. One of my favorite articles from you, Collin.