Joanna Hogg does so much with so little in this COVID-19 production, using the constraints of her setting and cast to create a wonderful mother-daughter mood piece. 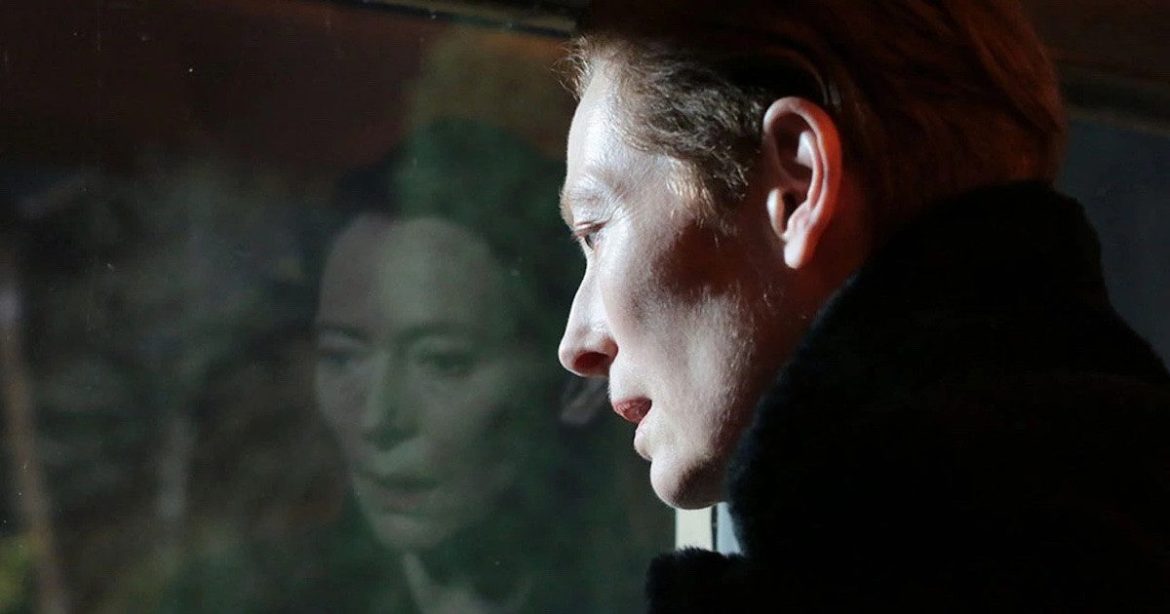 There’s a palpable sense of “less is more” in Joanna Hogg’s brand of formalism. Her camera is happy to sit back and observe, only moving very precisely when the scene calls for it. Commonly shooting on 16mm film also makes for a wonderfully textured frame, tapping into a sense of nostalgia and yearning that greatly helps her recall past eras. That is to say, her talents are perfect for The Eternal Daughter, a ghost story that actively constricts the air out of each scene.

To help tell this eerie tale is Tilda Swinton in not one but two(!) roles as Julie and her mom Rosalind. The two are traveling to a secluded hotel for a little getaway along with their dog Louis (Swinton’s real-life dog and very good boy). The manor, which looks like a perfect setting for a studio-produced jump scare fest, used to be a family home for Rosalind. Julie hopes the visit will put her mom in good spirits as they celebrate her birthday and navigate her shaky health; she’s also working on writing her next film, which will be about her mom and her memories.

Upon their arrival, Julie quickly realizes they are the hotel’s only guests. The extremely passive-aggressive receptionist (Carly-Sophia Davies) is also being quite difficult about their reservation, claiming the room they booked months ago isn’t available as a wall full of room keys hangs behind her. If the opening scene of Julie and Rosalind’s car making its way down a dark road lined with ominous overgrown trees accompanied by an eerie flute-led score wasn’t enough to set the mood, Julie’s first few interactions in the hotel certainly will. Often, Hogg and cinematographer Ed Rutherford employ a sickly green shimmer among the shadows — another sign that something spectral lingers among the cascading fog. Joanna Hogg isn’t one for jump scares, but The Eternal Daughter is full of unsettling imagery.

I love the growing partnership between Hogg and Tilda Swinton. (Not to mention that Swinton has been an amazing advocate for independent voices for her entire career, but especially in the last few years with The Souvenir I & II, Last and First Men, Memoria, and now The Eternal Daughter.) Swinton expertly moves her performances beyond a mere stunt and brings distinct warmth to Julie and Rosalind. Whereas her three roles in Luca Guadagnino’s reimagining of Suspiria allowed for an element of camp, here, she’s suitably subdued. She really can do it all!

For a bit, The Eternal Daughter moves along at its deliberate yet determined pace while occasionally brushing up against some genre tropes. Within its repetitive nature, a viewer will notice a certain emptiness at its core almost immediately. I imagine that detractors might chalk this up to insubstantial storytelling, a lack of emotion, COVID-related cutbacks, or a combination of the three, but Hogg seems to be actively engaging with that vacuum through Julie. Hogg even uses those tropes to her advantage to deepen the story. Julie’s unable to unwind her mother’s psyche, something we know is impossible but becomes increasingly more frustrating as a loved one reaches the end of their life.

What if we could learn just a little more about our parents? The conclusion here, as you might expect, is devastating. And yet, there’s still a beauty to it. Julie won’t ever fully know her mother, but trying to quell the fear of death and build stronger memories for her to hold onto once Rosalind is gone goes a long way.

Hogg joins Claire Denis as one of the few directors to interestingly represent a COVID world. For Denis, it’s casually adding in masks and pandemic conversation to create a better sense of place; as for Hogg, she utilizes the restrictions of filming in a COVID environment to reflect the psychology of her lead character. And, as it turns out, complement and expand The Souvenir and its sequel. With every passing film, Hogg proves herself as an indispensable voice, whose works are in constant conversation with each other.

Thank you for reading! What are your thoughts on The Eternal Daughter? Comment down below!