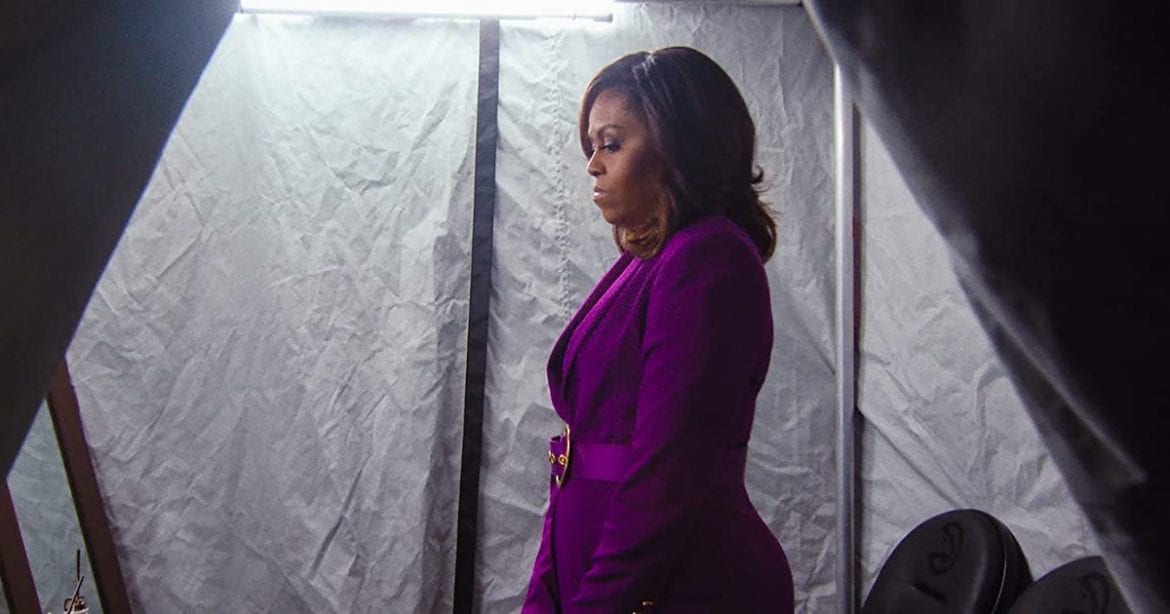 It’s been three and a half years since the Obamas left the political stage, and I still miss them. And guess what? I’m not even American! Still, I miss the ex-president, because of his intelligence, charisma, eloquence, and charm. And I miss his wife because she embodies everything a modern woman should be. She is beautiful, well-educated, warm-hearted, and clearly has a mind of her own. What an icon! Needless to say that Melania Trump looks almost like the opposite and doesn’t enjoy the same popularity.

Luckily for us, Michelle hasn’t forgotten about us. At the end of 2018, her memoir “Becoming” was published and became an instant hit. And now there is a documentary with the same title, following Michelle during her book tour. In between speeches and interviews, the former first lady reminisces about her past, her time at the White House, and the future. Barack himself is rarely to be seen, and when you do see him, he stays in the background. I like that approach by director Nadia Hallgren. A charismatic man like the former president could easily attract all attention to himself.

What is my first impression? I had already seen Michelle in a far less professional role on TV shows like The Ellen Show and Carpool Karaoke. And I had been pleasantly surprised. She was relaxed, gorgeous, witty, and wasn’t afraid to speak her mind. Moreover, she loves all kinds of music and seems to be a pretty good dancer. This is actually the same Michelle Obama we get to see here as well. At first glance, there is nothing bad I could say about her, but more about that later.

And granted, there were some things that I learned about her that I wasn’t aware of: the death of her father, her strong connection with her mother, and her relationship with her brother. The anecdotes about her first meeting Barack were funny as well. But in flashbacks, you can already see her struggle during the presidential campaign, where Michelle, an outspoken woman, has to tone down. Some people had the impression she was more campaigning for herself than for her husband. This led to negative criticism and Michelle had to take a step down. She doesn’t say it, but you can feel the hurt. And finding her place in the White House, both in a literal and figurative sense, was not obvious either.

These were the anecdotes that stuck in my head afterward. And then I asked myself: what have I really learned about this woman’s personality and goals? Maybe it’s better to read the memoir itself first and see this documentary more as a summary. The problem is that you learn a lot about the image of Michelle and not so much as a person. And an image is something that can be created and reshaped when necessary. In other words: there can be quite a distance between image and person…

Higher Ground, Michelle Obama’s, production company was the one who contacted Nadia Hallgren. So far, Hallgren was known as a cinematographer and director of short documentary features. Becoming is her first long feature. Before she started filming, she sat down with Michelle, and because the two women got along, Hallgren obtained permission to start with the documentary. And the result is this glossy, smooth, feel-good documentary. A reminder of how good the times were when she and her husband still ran America.

Yet, I can’t deny that Hallgren had a lot of unprecedented access to Michelle Obama. You can see her sitting next to her in the backseat of a car. You can even see the look of surprise on the faces of the secret agents. But just like us, Hallgren is more of an observer. And although the abovementioned anecdotes bring a smile to your face, you are left with a feeling of dissatisfaction. I wanted to hear the questions that really matter. What does she think about American politics nowadays? What does she really think about Trump? How would she tackle the current political situation? And social, economical, and educational issues? An intelligent woman such as she surely has an opinion on such matters.

Didn’t Hallgren have permission to ask the questions that really mattered? Or did she do this anyway and were the answers later edited out of the documentary? Who knows? I cannot help but think that Becoming could have been so much more: an in-depth portrait of a very intriguing woman. Moreover, the documentary spends most of its time in the past. What exactly does Michelle Obama intend to do in the future? Unfortunately, that is another unanswered question.

In a nutshell: Becoming leaves me with a hollow smile. Apart from some anecdotes, I haven’t learned a lot about Michelle Obama. The documentary merely skims the glossy surface. It just confirms the few things we know about her. But for unknown reasons, it doesn’t delve any deeper. And that is not only a missed opportunity but also a real shame.

Thank you for reading! What are your thoughts on Becoming? Comment down below!

[…] a Dutch person who is used to having government made up of coalitions, American politics can feel daunting. Even scary at times, when they are essentially only two ways you can vote, for […]

Uncut Pods (But on Netflix)