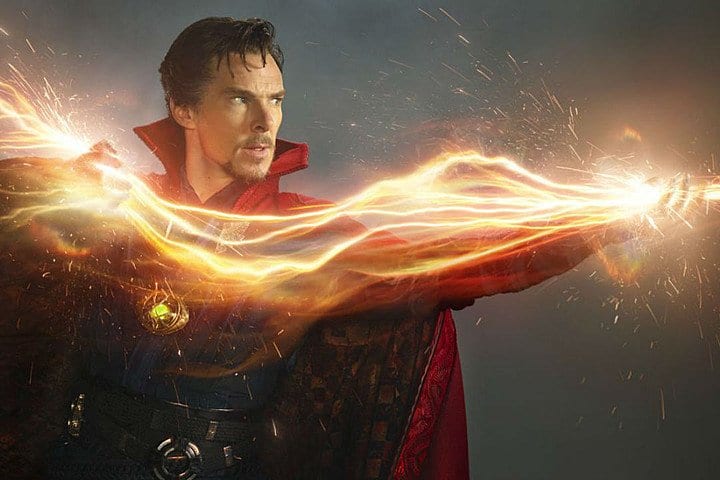 Here’s a review of the highly anticipated next installment in the Marvel Cinematic Universe, Doctor Strange!  This review will be spoiler free (as always)!

Doctor Strange is directed by Scott Derrickson and stars Benedict Cumberbatch as the Sorcerer Supreme along with Tilda Swinton as the Ancient One and Chiwetel Ejiofor and Rachel McAdams as Baron Mordo and Christine Palmer, respectively.  The story follows Steven Strange (Cumberbatch) who is one of the best doctors around.  However, he’s not exactly the best person.  He’s often very arrogant and pushes away those who care about him.  But all this changes when he gets into a very serious car accident which shatters his hands in the process.  He loses much feeling in his hands and deals with constant shakes, making him unable to perform as a doctor.

In desperation to get his old life back full of luxury and fame in his field, Strange begins looking to solve this issue by any means necessary, leading him to the home of the Ancient One where he learns of the mystic arts.

As with all other Marvel films, I was very excited for Doctor Strange to be released in theaters.  Marvel just does a fantastic job of capturing the essence of their popular comic characters while creating an overall fun movie that fits well with the rest of their movies to create a cohesive over-arching story to their cinematic universe.

Doctor Strange is also just such a deviation from the rest of the MCU characters as it’s Marvel’s first attempt to dabble with magic in their movies.  However, every other risk Marvel has made whether it was movies such as Guardians of the Galaxy or Ant-Man have all been acclaimed by both fans and critics.  At this point, I have complete and utter faith that Marvel will produce an entertaining movie every single time.

I also love Benedict Cumberbatch in just about every movie he’s been in during his career in Hollywood.  Marvel in general just does a great job of getting top tier talent for their movies.  The studios’ ability to attract multiple stars to every film is one of the reasons Marvel succeeds time and time again.  So, even though creating a Doctor Strange movie was risk for Marvel, I had zero doubt that I would leave the theater with a smile.

After approximately two hours in the theater, I was grinning from ear to ear.  Doctor Strange is the trippiest movie ever, and I mean that in the most positive of ways.  Let me start with the acting.  Benedict Cumberbatch is a perfect fit as the title character.  He does a fantastic job of being arrogant, likable, and hilarious all at once.

The whole cast for that matter does a great job of adding fun, heart, and even intimidation.  Tilda Swinton practically stole the movie as the Ancient One.  I know that there were complaints of white-washing the Ancient One character, but Swinton shines as Strange’s teacher.  She’s very believable as this super powerful ancient woman and plays all the emotions necessary to really add to the movie.  She toes the line perfectly with being the wise sage that Doctor Strange needs while also being a bad-ass.  I also thought Rachel McAdams was a solid addition to the movie as well.  Her character isn’t given much backstory or depth, but she is important to the arc of Doctor Strange and helps to keep him grounded and relatable.

However, there were a few issues with the movie.  As per usual with Marvel films, the villain was less than stellar.  Mads Mikkelsen is definitely very threatening and menacing as Kaecilius, but he is not given the screen time to be fully fleshed out as a character.  He is definitely one of the better villains of the MCU so far, but that’s not really saying much.  I understand that the movie is an origin story for Doctor Strange and most the run time of the movie should be spent following  his story arc, but I would have liked to see Kaecilius given more to do.

The humor also was very hit or miss throughout the movie.  On occasion, I felt that some of the comedy fell completely flat and was shoehorned into scenes for no reason to add levity that wasn’t really necessary.  Lastly, I wish the movie would have given more explanation to some plot points.  With a movie this (no pun intended) strange, I would’ve preferred some more exposition as to what is happening since this movie is so different from any Marvel film to date.

That being said, I feel confident saying that Doctor Strange has some of the best special effects ever in film.  You’ve all seen the bending and folding of the city-scapes in the trailers, and there is a LOT of that in Doctor Strange, but there is so much more to it.  The movie has gotten a lot of comparison to Inception for this reason, but in my opinion, it blows Inception out of the water.  There’s crazy combinations of bending time and space while being intertwined with different dimensions that is absolutely unbelievable stuff.  There were a couple set pieces that made my jaw drop to the floor.  This movie is worth seeing solely on the visuals.

Doctor Strange goes places we have never seen before as moviegoers.  Every time you thought the trippiness and kaleidoscopic visuals reached there peak, the movie added another element to it. Doctor Strange is a spectacle in every way imaginable.

In conclusion, Doctor Strange is a spell-binding visual experience with fun characters but does succumb to the typical Marvel movie tropes.  With these thoughts in mind, I’ll give Doctor Strange an A-.  I’m really looking forward to seeing how the sorcerer fits in to the rest of the Marvel Cinematic Universe.  Also, there are two end credits scenes (both of which are really good) so make sure to stay for both!

Thank you all so much for reading!  What are your thoughts on Doctor Strange?  Where do you think Marvel goes from here?

As for what coming next, what should I review?  Whether it is old or new, the choice is up to you!  Thanks again!

[…] still only knows like two spells. That fact alone should signal the death of […]