‘Thor: Love and Thunder’: Another Film Off the Rickety Marvel Assembly Line

Taika Waititi's second Thor film isn't the party that 'Ragnarok' was, just another slapped together adventure. 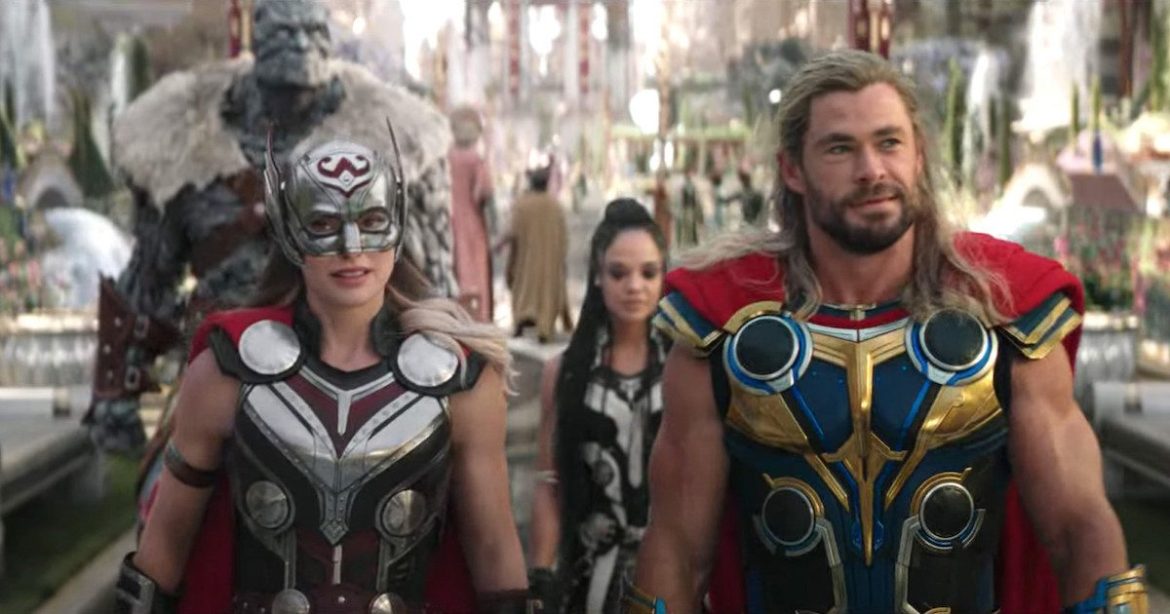 I had my come-to-Jesus moment with the MCU while watching Hawkeye a few months back. I had liked WandaVision and Loki enough, so why not try it out, I thought. Ten minutes in, the phone is out. Ten minutes after that, I’m barely paying attention anymore. The first episode ends, I couldn’t really tell you what happened. I think Hailee Steinfeld stole a thingy that someone else wanted, and maybe Renner brought her back to a safe house? Regardless, I start the second episode because I must stay up to date with the “conversation”. I get five minutes in, Renner tries to make a joke, and I think to myself, “what am I doing here?”

I haven’t looked back since. No What If…? for me. Moon Knight? Oscar Isaac and Ethan Hawke are my boys, but no thanks. Ms. Marvel? Looks sweet, but I’m good. You don’t exactly need me to tell you that quality control in the MCU seems to be skipping a few steps recently as Disney movies on from the Infinity War to the Streaming War. (But let’s be honest with ourselves, most of the output has always been very, very okay.) We’ve had six movies and seven TV shows in a year, with She-Hulk just around the corner. Mr. Chapek, I get that you have to grow Disney+ subscribers to keep your job, but my god, chill.

The MCU was always going to go through a transitional period post-Endgame with turnover in its main cast, but we’ve really felt it recently. With no Endgame-like arc in sight for now, each movie has an added stench of wheel-spinning. And somehow, the CGI is even worse than it was before as Disney churns through movies and shows. (To be fair, pandemic-related script changes definitely exacerbated these problems.) Worse, Taika and Tessa Thompson admit it themselves:

Taika Waititi and Tessa Thompson poke fun at #ThorLoveAndThunder’s editing and CGI in this excerpt from a Vanity Fair interview pic.twitter.com/KKTW2UvaRW

All of that is to say that Thor: Love and Thunder is more of what you’d expect so far from Phase 4: a no-more-than-65%-complete project that didn’t have the time to fix script and CGI issues because the Disney suits insisted that it get out ASAP in the name of content. That, and because Taika Waititi’s sense of humor is extremely carefree, the film’s glaring problems become even more frustrating, as if the overarching joke is on the viewer for actually paying to watch something so undercooked.

There’s a pervasive feeling of, “what exactly are we doing here?” to Thor: Love and Thunder. In the first act, the Guardians are…there, only to leave the film for…reasons. I guess it was supposed to remind us that Thor traveled off into space with them at the end of Endgame? After a massive case of whiplash, Natalie Portman’s Jane Foster is back and has Stage IV cancer, and then the remnants of Mjolnir (which somehow got back to Earth after being smashed to bits in space) call to her because…other reasons? If it feels like the print of Love and Thunder was somehow thrown into a car crusher, it’s because it very well might have. This movie has four editors. Taika Waititi also made note that the original cut of Love and Thunder was over four hours long. Obviously, not everything needs a director’s cut, but, equally obvious, Love and Thunder‘s scenes are majorly squished together and plenty was left on the cutting room floor. When multiple scenes have characters breaking the 180-degree rule — in a $200+ million movie — something probably went wrong behind the scenes.

What makes Thor: Ragnarok such a fun time is how it manages its tonal juggling act. Scenes have longer to breathe. A scene where Jeff Goldblum says “Assgard” can be funny and Odin passing away can be moving — and they feel of the same piece. From the start of Thor: Love and Thunder, we see Christian Bale’s Gorr stumbling through the desert with his child who quickly dies in his arms. It’s pretty dark stuff as far as Marvel is concerned. But then, brooding Gorr comes across an oasis full of gods acting like Monty Python rejects. It’s very, very jarring. This movie is one part goofy Taika comedy, one part gothic horror, one part kids-in-peril action movie, one part sincere cancer drama, one part Girl Dad content, and even one part a treatise on the failings of deities. (It’s also supposedly Marvel’s “gayest” movie yet, which is Disney speak for “we’ll put two mentions of sexuality in our movie and not a single mention more!”) There just isn’t enough space for everything.

Especially for Bale who, despite playing a character called “The God Butcher”, doesn’t get to do a lot of god butchering. His brand of menacing is Pennywise-esque when he gets the chance, though, making for some fun sequences. One encounter on a planet where everything is monochromatic is exceptional thanks to Bale’s kooky energy. Waititi’s direction is also really good in this scene, utilizing reportedly new technology to fantastic effect. Though, when compared to the other set pieces, it’s blatantly obvious that VFX artists had no time to finish rendering other scenes. Combined with rehashed jokes from Ragnarok and plenty of improv awkwardly cobbled together in editing by one of the four editors, it’s rarely pleasurable.

It’s just a very mindless experience, even for MCU standards. One that starts to float away from one’s memory before the second stinger plays after the credits. Hemsworth is settling in nicely to goofy Thor — I hope he gets the chance to play him again in a movie that isn’t fully on autopilot — and there will be absolutely no Tessa Thompson slander here. Natalie Portman, while not a perfect match for Waititi’s oddball stylings, is always great to see too. Most importantly, I absolutely adore middle-aged Russell Crowe, who seems keen on hamming it up as much as humanly possible in genre fare. But none of that really makes up for a movie with a plot that almost entirely revolves around getting a thingy that ultimately doesn’t matter very much except to set up possible adventures down the road. For a movie that has Chris Hemsworth smashing rabid rooster monsters to the tune of “Welcome to the Jungle”, Love and Thunder remains unengaging throughout.

Thank you for reading! What are your thoughts on Thor: Love and Thunder? Comment down below!

More ‘WandaVision’, the ‘Godzilla vs Kong’ Trailer, and...

A Feminist Rant on ‘Captain Marvel’ – She...