Robert Pattinson completes his transformation from a vampire to a bat. 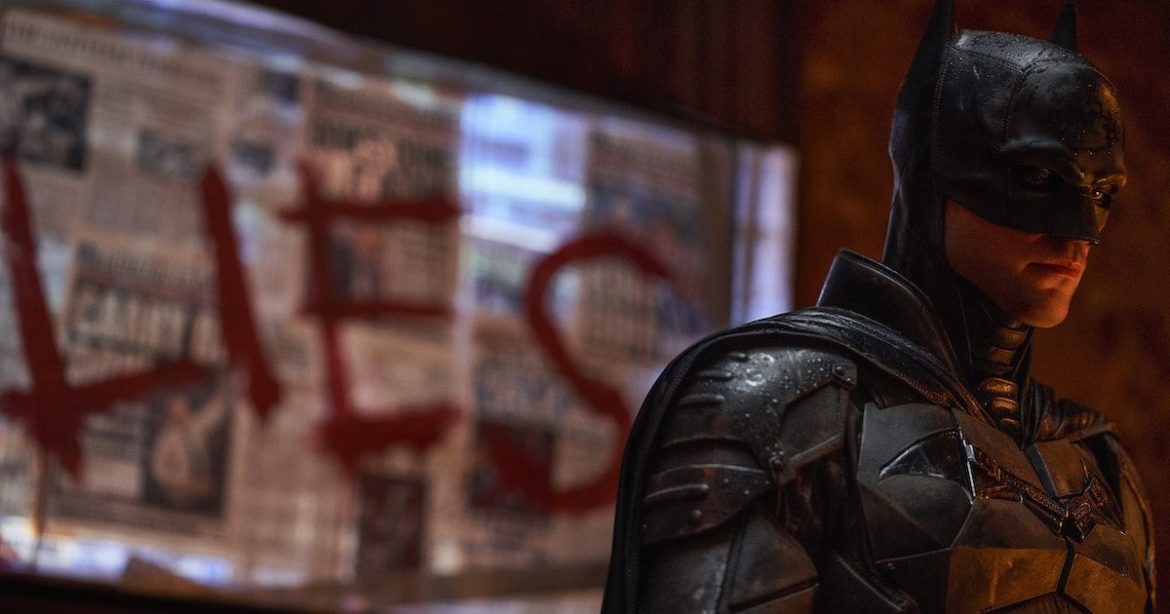 As a cynical film reviewer with a chronic case of cape fatigue frustrated and concerned with the current state of Hollywood cinema, it takes a lot for me to muster up any excitement for superhero fare these days. I’ve become disillusioned and have lost patience with the dull, lifeless quip-fests Marvel is pumping out on an assembly line. And DC’s recent outputs, though it’s been more willing to take some risks and be adventurous, are still a flip of the coin when it comes down to the film’s quality.

With that in mind, it would seem utterly foolish to believe the one superhero production that could break the mold and breathe some life and vigor into a genre growing stale and repetitive is also the one that features arguably the most oversaturated fictional character of the 21st century. What more can be done with Batman after so many big-screen adaptations and so soon after the last time we saw him in Zack Snyder’s DC films? A question co-writer and director Matt Reeves takes by the horns and wrestles with throughout his 176-minute epic on the caped crusader, this time with Robert Pattinson donning the iconic cape and cowl.

The Batman doesn’t waste time bogging itself down in Bruce Wayne’s tragic backstory you’ve seen a thousand times. Instead, we are dropped two years into his crusade as the Dark Knight of Gotham where he’s already established as the dark, brooding vigilante who can strike fear into the hearts of any criminal or petty thug with the meer sight of the Bat signal. However, Batman meets his first true archenemy in the form of a serial killer dressed like a walking army surplus store known as the Riddler (the king of softly spoken breathy weirdos, Paul Dano). When he starts killing crooked city officials, police officers, and other political figures of Gotham, Batman and Commissioner Jim Gordon (Jeffrey Wright) must stop Riddler in his tracks and investigate the corruption the Riddler is threatening to expose. There’s also a Catwoman thrown amongst the proverbial plot pigeons as Selina Kyle (Zoë Kravitz) crosses paths with the Batman on her own quest for vengeance against Gotham’s most notorious crime boss Carmine Falcone (John Turturro) and his top henchmen known as the Penguin (Colin Farrell under a metric ton of prosthetics).

What immediately separates The Batman from other adaptations of the world’s greatest detective is that for once, he actually does some detective work. Reeves and Co. go to great lengths to create a taut and atmospheric neo-noir that has real grit. It’s the first time since Logan where a superhero story is used within a genre framework so effectively and with so much panache. Gotham has never looked more like more of a cesspit and the production design creates such derelict and decrepit environments with an almost tangible amount of filth. Aussie DP, Greig Fraser follows up on his Oscar-nominated work for Dune with another visual smorgasbord of incredible imagery and magnificent uses of lighting (a fight sequence lit by only the muzzle flashes of machine guns is just stunning). Michael Giacchino’s score provides an epic and versatile anthem that bellows all that Batman is in just four notes, whether belted out on heavy brass horns or echoed from a tolling bell.

The deep A-list cast is unsurprisingly great. Pattinson brings a new edge to Batman in terms of the more introspective moments, but also brings the ever-important physicality. He delivers on the bone-crunching action and hand-to-hand combat reminiscent of the Arkham Games. Kravitz is seductive, capable, and smart as Catwoman and has some simmering chemistry with Pattinson. Farrell is having the time of his life throwing his prosthetic weight around as the Penguin, leaning hard into a caricature of a New York mobster. The effortlessly cool Jeffrey Wright gets much more screen time than expected and he brings integrity and humanity to Gordon while also not afraid to stamp his authority to anyone, even Batman. Paul Dano is wonderfully creepy and brings a very reserved and intelligent form of psychopathy to the Riddler for most of the film. That is until the character does a complete 180 after an interrogation scene and becomes less like a methodical serial killer and goes full-on unhinged maniac.

It’s remarkable a film with such grand scope never loses focus of being a character piece, despite the film featuring very little of Pattinson as Bruce Wayne. This is a Batman film through and through. It doesn’t have the philosophical speechifying of Nolan nor the blatant biblical symbolism of Snyder, but Reeves takes the opportunity to confront the legacy and the legend of the Batman character in the cold light of day. When the Riddler’s motivations are revealed and he exposes all of the corrupt political machinations that might lead back to the Wayne family, Bruce has to reckon with the fact that his whole ideology as Batman could have been built on lies. That maybe his parents weren’t the saintly philanthropists who used their money to create a better world for everyone and were just like all the other “white privileged assholes” in the upper echelon of Gotham.

It’s a clever and unique approach to take with the Batman character in the current sociopolitical climate. How can Batman be a vigilante protecting the people of Gotham when he’s essentially a textbook example of late-stage capitalism? Was Bruce Wayne ever really an orphan because he never had truly “nothing?” It’s a fascinating direction to take the character in that forgoes any obnoxious sense of post-modern smugness these criticisms often have, but the film never fully grapples with these philosophical conundrums by the time the credits roll and does so with an attitude that screams “we’ll figure it out in the next one.”

Even when it falls victim to dedicating its final moments setting up a sequel/franchise, The Batman proves that the caped crusader still has so much more to give cinematically. Reeves captures everything that makes Batman so beloved and iconic, but gives a fresh and exciting spin on this world that will captivate audiences, commanding their undivided attention for nigh on three hours. Though he never left, the Dark Knight has returned to the big screen in a big, big way.

Thank you for reading! What are your thoughts on The Batman? Comment down below!

If Robert Pattinson doesn’t become a vampire I refuse to watch.

It’s Time for a Reboot of ‘The Mask’