Trailer Drops for Martin Scorsese’s ‘Silence’ Only Weeks Before Release 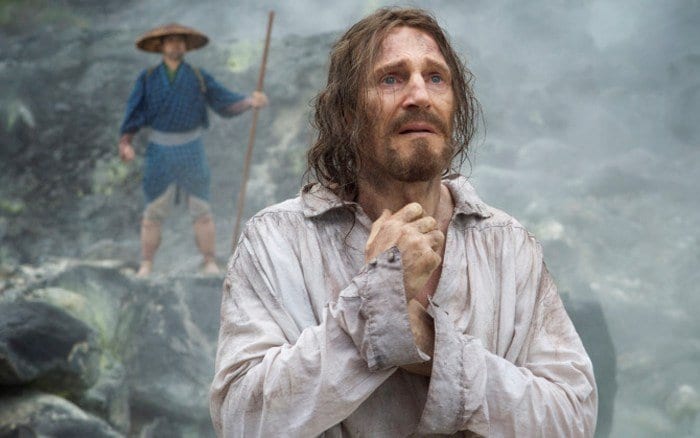 Right before Thanksgiving, Paramount released the first trailer for the next movie directed by the legend Martin Scorsese, entitled Silence, which you can watch here on YouTube.  What makes this move curious is that the movie is scheduled to have a limited release in theaters starting December 23rd of this year before releasing wide in January of the new year.

As mentioned above, Silence is directed by Martin Scorsese and also stars Andrew Garfield, Adam Driver, and Liam Neeson.  The story follows Jesuit priests Father Rodrigues (Garfield) and Father Francisco Garrpe (Driver) who must travel to 17th century Japan, a country where Christianity was forbidden at the time and missionary presence was also outlawed, to search for their mentor Father Ferreira who has gone missing while on mission in the country.

First off, let me talk about the trailer itself.  It appears from the footage shown that Scorsese has crafted another Oscar worthy film.  There seems to be some great performances to be seen out of both Andrew Garfield and a very skinny Adam Driver.  The cinematography is also something to behold in the two minute trailer, with the pure beauty of Taiwan (where the film was shot) on full display.  We also get some glimpses of the peril that the priests will attempt to overcome which are very powerful and stark along with their religious themes.  The feel of the trailer makes it seem that Silence will be a movie that contains religious elements, but it won’t attempt to preach its religion to viewers, a stance that is much preferred in movies that contain faith based plots.

That being said, the marketing of this movie along with the notable production issues still cause there to be some doubt around what the final product of the movie will end up being.  The film was previously slated to come out a few years ago after many years of development.  However, Scorsese signed on to direct The Wolf Of Wall Street, pushing the release year to 2015.  But, with multiple issues on set, including a death of a worker on location in Taiwan, the film was pushed back to this year.

On top of those issues, no major marketing of the movie was released until the main poster for the film was released right before Paramount released the trailer, leaving the movie less than a month for a marketing push ahead of the movie’s release.  There were talks that Scorsese wished to release a cut of the movie that exceeded three hours while the studio wanted time cut off the movie shorter.  Could this have been what delayed any type of earlier marketing campaign?

Typically, movies that deal with such issues getting off the ground end up with disastrous results.  However, I feel that this instance is different under the steady guidance of Martin Scorsese.  The Wolf of Wall Street had a similar issue with Scorsese previously having a run time well over three hours before being reduced.  By all accounts, that movie ended up just fine.  Whether the movie breaks even on its budget with all the extra costs put into it is still very much a concern, it is safe to think that the artistic vision laid out by Scorsese will prove to be worth the trip to the movies.

All this speculation comes to an end once Silence hits theaters in a couple weeks on December 23rd.

What do you think of the issues surrounding Silence?  Do you think it’ll be a good movie?  Comment below and let me know.

It’s difficult to say what’ll happen. One the one hand: yes, Scorsese’s the man behind it; on the other: weak marketing harms movies WAY too much.
But like you said, we won’t know much until the actual release.