If you ever wanted to mashup 'Misery' and 'Babe,' this is the movie for you! 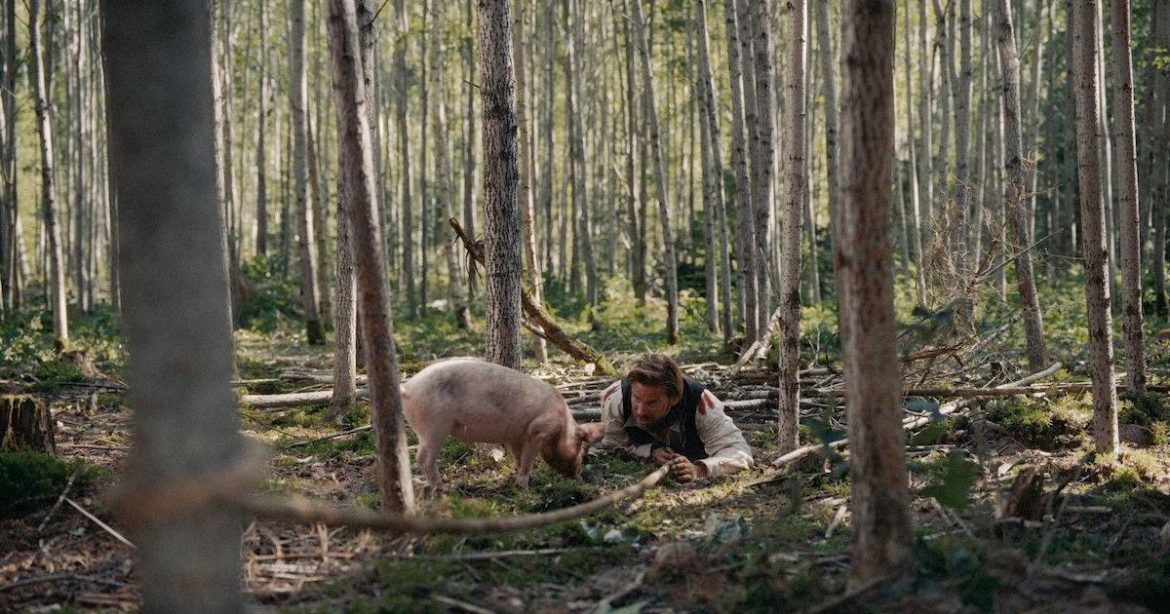 The self-described “dark fairy tale,” Squeal (also known as Samuel’s Travels) is a truly international affair: the film comes from Latvia, has an Armenian writer/director, the lead actor is from Belgium, and the narrator sounds Australian. It is also a mashup of genres, pulling elements from comedy, fairy tale/fantasy, horror/thriller, and oddly enough, romance. In fact, I wasn’t sure what to label this one for the purposes of this review.

Our movie begins with a piglet staring up at an airplane, seemingly in awe of it. Our narrator explains this piglet has recently run away, and is experiencing his first taste of freedom. His first time to see the sky, much less a plane. The sight of a jet is also what tells us this is a modern-day tale, a fact we might not know from the fanciful music and fonts of the opening credits.

We are then introduced to Samuel (Kevin Jansenns), our heavily-tattooed Belgian protagonist, whom, it seems, is also enjoying freedom from entanglements. He is in Latvia, searching for his biological father, a photo of whom he carries in his car. At one point, the photo floats majestically, just above the passenger seat, which is enough of a distraction to cause Samuel to strike the aforementioned piglet with his car.

While attempting to bury the assumed-dead piglet in the woods, Samuel happens upon Kirke (Laura Silina), a local farmer’s daughter who, after uttering some terrified screams, explains the pig belongs to her. Samuel offers to drive Kirke, and the very much still alive piglet, home. The scene is quite hilarious, actually.

Kirke, the first English speaker Samuel has come across, feeds him and offers him a place to sleep. The men standing over Samuel when he awakens, however, are not so hospitable. To say things change dramatically and swiftly for our lead would be putting it mildly.

I am trying to avoid spoilers as best I can, but it’s nearly impossible to say anything about this movie without including some. For example, I have to tell you that Samuel finds himself chained up, nude, in a pigsty. A literal one.

The overall tone of the film shifts here, as does the look of it. The scenes in the pigsty are genuinely horrifying and dark. The filmmakers did a great job, here, as it feels like a real and established place, not a set with mud dumped on it.

Kevin Janssens gives a wonderful performance as Samuel. While he is quite literally naked for much of the movie, he remains just as vulnerable and exposed when clothed. He shines in every facet of this story. He sells the humor, terror, confusion, affection… all of it.

He Is So Creepy!

This movie’s biggest strength lies in its casting. Everyone was well-suited for their parts, and they all gave good performances. The stand out for me, apart from Janssens, was probably Normunds Griestins as Jancuks.

Jancuks is a truly sinister character, who makes the tyrannical farmers seem gentle by comparison. He is obsessed with marrying Kirke, even though he doesn’t seem to like her at all. He’s abusive in every sense of the word, and more of a pig than the pigs. He’s almost omnipresent in our story, and casts his shadow over everything. He’s a character you genuinely hate, which probably means he was well-written and well-acted.

Wait… He Can Talk?

About midway through our tale, it becomes clear that Samuel can communicate with the main piglet (the one he previously hit with his car). They have somewhat deep talks, and the piglet helps Samuel on his journey, both physically and emotionally. It’s a very charming element, juxtaposed with the horrors Samuel is experiencing. It’s almost as if someone dropped Babe the pig into the film Misery. And it works, somehow.

A Word of Warning

While we’re hovering near the subject, I feel I should mention this. If you are someone who loves pigs as much as I do, there are parts of this film that will disturb you. The scenes of violence toward the animals are filmed in such a way that we don’t see too much, but the sounds are simply horrifying. The first thing that pops up in the ending credits is a “no animals were harmed…” disclaimer, of course, but it’s still hard to take in the moment.

Time For the Nitpicks

While this movie overall is very well done, there are a few things I took issue with. Firstly, it’s unclear how we, the audience, are meant to feel about character of Kirke (Laura Silina). Is she a villain, our heroine, a damsel in distress, or something in between? Were any of these horrible happenings her idea, or is she just forced to go along with it? Perhaps this is intentional. Maybe questioning her motives is part of the viewing experience.

Also, the ending of Squeal is abrupt and ambiguous. The narrator seems to tie everything up with a bow for us. Then he suddenly snips the ribbon, and we’re left dangling in the breeze. It leaves us wanting about 20 more minutes of movie to explore these new questions.

That’s really all I can complain about with this one. It is well-made, and is a lot more fun than it has any right to be.

It’s hard to explain how or why Squeal is so charming, given all the horrible things that happen to our lead character. The genre blending also shouldn’t work, yet it does. It’s downright hilarious at times. It’s also scary and sad. Then it’s cute (“aww, look at the piggies!”). It’s a heck of a ride, and I enjoyed every moment of it.

Thank you for reading! What are your thoughts on Squeal? Comment down below!