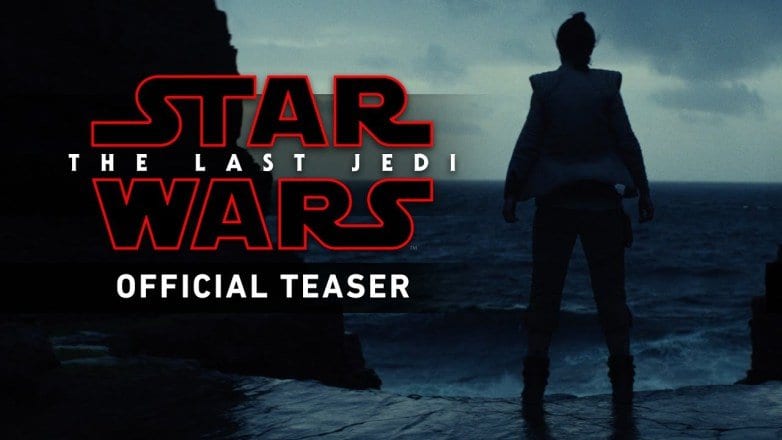 On Friday at Star Wars Celebration, director of Star Wars: The Last Jedi, Rian Johnson, released the first trailer for the film to thousands of sweaty, hysterical Star Wars at The Last Jedi panel in Orlando, Florida.  The trailer was met with a thunderous applause.

Like any Star Wars fan, any piece of news is met with uncontrolled speculation and lunacy.  MovieBabble has never been one to miss out on speaking inaccuracies, so let’s speculate!

While Lucasfilms is obviously keeping plot details under wraps for now, we know that Episode VIII will pick up right up after the events of Episode VII.  Luke Skywalker seems primed to become Rey’s mentor as she learns the way of the force.  Kylo Ren is also lurking as he attempts to learn the ways of the dark side with the help of the mysterious Snoke. Good thing I thoroughly enjoyed this trailer, or else I’d have the entire internet gunning for my neck.  No issues to report from this man!

This trailer is very much a tease, which was a good call from Disney considering that this film won’t be released until Christmastime.  The trailer mostly relies on little flashes of images that fill our hearts with joy and remind us that Star Wars is still alive and well.  For those all over the internet that are complaining that the trailer didn’t show much, you are precisely the reason why studios feel the desire to show the entire movie in a trailer.  You can relax for a few months until the film gets released in theaters.

This trailer has a lot of great voice work from Mark Hamill, but the piece that I latched onto was a voice over by Daisy Ridley.  We hear her exclaimed that she feels the light, the dark, and a balance.  What could this mean?

It’s pretty safe to assume that this is in the middle of a training sequence for Rey a la Luke and Yoda in The Empire Strikes Back.  But those words she spouts out, could they be foreboding of events to come?  There has been much talk of Star Wars moving away from character who are wholly dark or wholly light in The Last Jedi.  These words may be a precursor to such a fate in a galaxy far, far away.  Plus, how cool is the that shot of the rocks floating?  Young Jedi masters grow up so fast! Within those images that are paired with the Rey’s voice over, you can vaguely hear some voices in the background such as Darth Vader and quite possibly Yoda.  Many are calling for Yoda (and Hayden Christensen) to reappear in Episode VIII as a force ghost, so it is quite possibly that the trailer is alluded to both their presences in the film.  Or Disney just likes messing with fans that will pick apart every single detail of a Star Wars film they can get their hands on.

Moreover, we then see some pretty awesome fantastic action shots follow this moment.  One even shows Captain Phasma doing more than she did in all of The Force Awakens!

However, the best shot (or sequence of shots) in the trailer may be massive space battle that we are in store for.  From the flickers of the fight we saw, it appears that this battle will be epic in scope.  You heard it here first, but I’m speculating that this may be the best space fight yet in a Star Wars film.

What am I basing this off of you ask?  Well, nothing really.  But look at all those random ships fly around!  Excitement!  Blasters!  Space!  Did I mention blasters?

The piece de resistance comes from the last line of dialogue that I’m sure has already created hundreds of speculation videos on YouTube.

Luke utters that it’s time for the Jedi “to end.”  This line had many shouting that Luke is going to turn to the dark side and abandon Rey on that rocky island in Ireland… I mean Ahch-To.

If I were you, I wouldn’t jump on that bandwagon just yet.  As I mentioned before, Star Wars is primed to move away from idealized characters.  In my humble opinion,  Luke is speaking of ridding the galaxy of the polar opposite ideologies.  There can be no balance with two opposing sides consistently coming after each other.  The Last Jedi will be the start of a different force user, not a Jedi or a Sith.  These new force users will have feelings of both light and dark in them and they will be the ones to bring balance to the force.

Or Luke just hates Jedi now and will team up with Snoke.  My guess is as good as yours!

This trailer is pretty rad.  It does what any solid teaser trailer should do: show the audience practically nothing just give them just enough content to write horribly misguided speculation articles (wait…).  This is only the beginning of the media circus for a film that’s destined to to take $12 from our pockets.  Let’s all take a deep breath and allow this trailer to be enough until the next trailer comes around.

Or we could all freak out and wait on pins and needles until we force Rian Johnson to tell us the most minuscule detail about someone sneezing in the third act of the film and make countless articles and videos describing what this may mean for the future of Star Wars.

I’m leaning towards the second option coming to fruition.

Thanks for reading!  What are some of your The Last Jedi fan theories?  Comment down below and let your thoughts be heard.

If you enjoyed this article, please help to spread MovieBabble to new audiences!

That part gives me chills…

I think that gave everyone chills lol

Good review and commentary. I saw that the Rebels cartoon was wrapping up. There is likely a tie in to build out the SW universe for the movie release. Regardless, I can’t wait for this Christmas present!

I love how we get a present from Star Wars every single year now!

Yep! The only downside is that LEGO focuses too much on the new sets and the Rebels sets got overshadowed :/

Well at least you get a new movie every year now! lol

An Inside Look into How Rotten Tomatoes Actually...