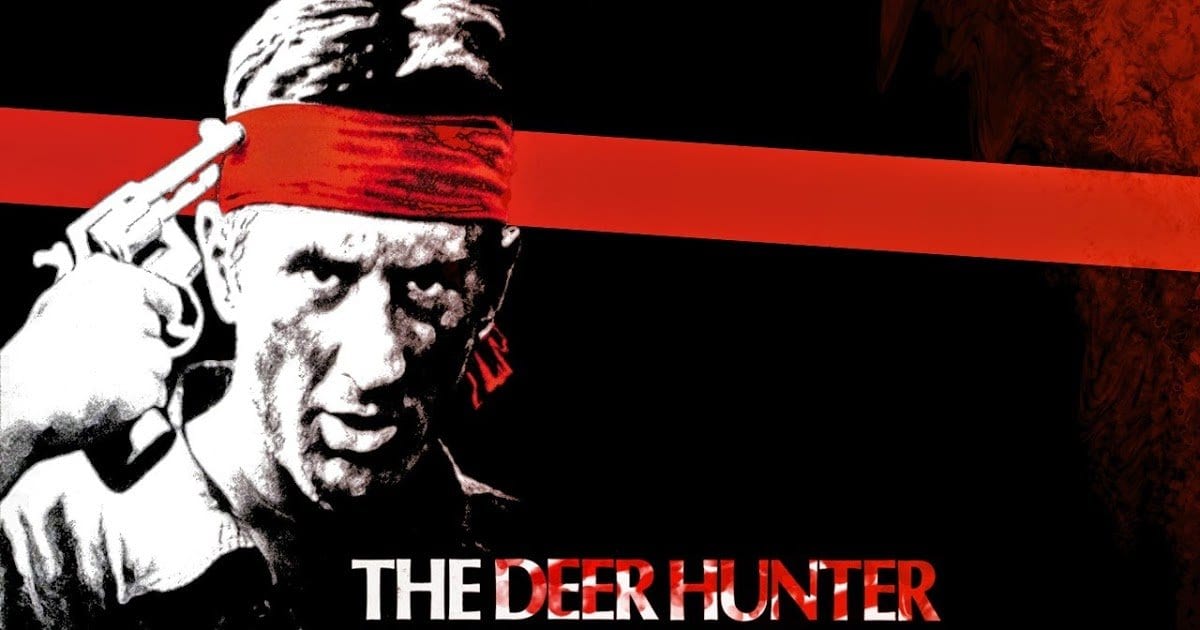 As my journey to watch and review every film on the IMDb Top 250 List continues, the next stop on the list is another classic that is beloved by many, The Deer Hunter!  The film is considered to be a heart-wrenching, difficult watch by many while being one of the longest films on the IMDb Top 250, clocking in at over three hours long.  But has The Deer Hunter aged liked a fine wine or has it succumbed to different societal views over time?  The following review will be spoiler free.

The Deer Hunter is directed by Michael Cimino and stars Robert De Niro, Christopher Walken, Meryl Streep, and John Cazale.  We follow a group of friends in the Pittsburgh area as they prepare to be sent out to Vietnam for the war.  However, before the men get shipped out to war, they go on one last deer hunt together.  The event perfectly mirrors the horrors of the war that they must all eventually endure.  After the war, Mike (De Niro) must learn to deal with the events that scarred him while attempting to come to terms with a new found perspective on life.

Upon its release in 1978, The Deer Hunter was nominated for five Academy Awards, including Best Picture.  As a note, the film marked the first time that Meryl Streep was nominated for an Oscar (best supporting actress).  For those counting at home, she has since become the most nominated actor or actress in history with twenty nominations.

Akin to many films that have garnered approximately the same praise from fans and critics, The Deer Hunter went over-budget and over-schedule in addition to other development issues.  Weirdly enough, each member of the core writing team has a different story about how the film came to be.  The director, Michael Cimino, claims to have fed Deric Washburn lines of dialogue for the script while scouting various locations for the film only to found out that Washburn’s script was almost complete nonsense upon reading it, which resulted in Washburn’s firing.  However, Washburn later claimed to have written the entire script in less than a month only to then be fired by Cimino so he could take the credit for the film. Either way, the film stirred up much controversy with its production issues in combination with its subject matter in the late 1970’s.

The Deer Hunter is a perfect example of why many consider Robert De Niro to be one of the best to ever step in front of a camera.

When you think of some of the best actors working in today’s Hollywood, a lot of them lack one noticeable trait: subtlety.  In order to create a compelling performance, most actors have to act big and loud, forcing everyone to notice them onscreen.  De Niro is certainly worthy of your attention, but he doesn’t need to scream to get it.

De Niro commands the screen just by the look in his eyes.  There’s many moments where he could’ve emoted with a ton of outward feelings, but all you need to see is his eyes and you understand the pain that he has from his experiences in the war.  Upon returning from Vietnam, De Niro’s performance is so nuanced and skilled that it’s almost breathtaking.  You understand the grief he’s under without him having to break down and bawl his eyes out.

Then, when De Niro loses it, it makes it all the more powerful, showing that his emotions have finally boiled over the tipping point.  The Deer Hunter may be difficult to watch, but it’s worth it to see De Niro.

This film is the perfect example of the phrase “show, don’t tell.”  There are countless sequences throughout the film where minimal (if any) dialogue is used.  However, the scenes set by director Michael Cimino are so powerful and poetic that any extra dialogue would detract from the scene.  It really speaks to Cimino’s solid direction to allow extended moments within a three hour film to continue uninterrupted.  Many directors today would truncate these moments, especially the first act of the film.  However, in its mundane, inconsequential feel is the roots for the misery that awaits our main characters.

Surprisingly, the moments that feel meaningless in The Deer Hunter actually have the most meaning.  Some of the smallest moments in the film have an underlying symbolism that drives home the point that Michael Cimino and his crew attempted to convey.  Other than The Deer Hunter being a layered story regarding how man tries to deal with the terrors of war, it’s truly about the human psyche.  It delves into what type of threshold we have for pain in all forms.  More importantly, what we do after that threshold is reached.

But The Deer Hunter doesn’t just have symbolism, it has some of the most tense incidents in film.  Those who are aware of the film know that I’m referring to the countless bouts of Russian roulette.  Those instances are filled with so much white-knuckled tension that many were appalled by the movie in 1978.  Those who stick with the film will find even more emotion in these scenes.  The best of which involves De Niro in one of his finest moments as an actor.

These scenes are all tough to watch.  That much is a given.  They become even more tense as you become more invested in each character.  As the film progresses, the tension ratchets up even more, making it more likely that you’ll look away.

In the end, The Deer Hunter may be one of the most dark films ever put to screen.  Fueled by a powerful performance by De Niro, the film deserves all the praise it gets.  I do believe an A+ is in order here.

Although many critics have The Deer Hunter among the best films of all time, many fail to bring it up in conversation when discussing the best films ever made.  If you haven’t seen it yet, well, what are you waiting for?  Get to it!

The movie was so taut. What riveted me about it was the dynamics of how the events changed each, and how they coped with their changes. The movie demonstrated the emotional illogical inconsistency that becomes embraced, taking individuals into their own serpentine journeys. Part of watching the long periods of the movie without dialogue is attempting to understood who they were, who they are, and what they’re thinking. The movie allows each of us as viewers to reach our own conclusions. In that way, it lets us relate as humans to the struggles we’ve endured, the decisions we make, the friends that we lose, and the life that we once lived.

Couldn’t agree more. This film has a refreshing way of allowing us to ingratiate ourselves with the characters. We like them because we relate to them.

I keep trying, hopefully this comment will break through. You may be right about this being one of the darkest movies ever. But wow, it was so truly amazing, great performances throughout. DeNiro was terrific, but the role that truly amazed me in this one was the one by Christopher Walken…such a truly heartbreaking scene at the end…it gets me every time that I see it. Great post! ?

We have a success! Thanks for your thoughts! This was actually the first time I watched it so I wasn’t prepared for what I was going to see.

Yes, finally it works again ?Looking forward to commenting and exchanging thoughts again. No, I really understand that you weren’t prepared for it. That was pretty much how I felt after I first saw this movie. Then again, only really great movies are able to do that, and this is certainly one of them ?

Deer Hunter doesn’t get mentioned often in casual conversation because there is nothing casual about it. From the wedding scene that was filmed practically in real time to the absolutely intense suspence of the violent scenes you mentioned, the film is a tough slog. Is it worth it? Absolutely! Will I be ready for a second viewing within the decade? Maybe not. It’s just tough to watch.

Very true, but even films like Schindler’s List are certainly among casual discussion of great films. Probably because that’s more of a universal topic.

For whatever reasons (which might turn into a blog post of their own) I find Deer Hunter much rougher to watch than Schindler’s List. By far. The latter still comes across to me as theatric. There is something about Deer Hunter that makes it feel a little too real.

Absolutely. It’s probably that lived in feel that Cimino creates by allowing these unscripted, un-Hollywoodized to take center stage, making the film as a whole feel like you’re a fly on the wall watching everything unfold.

‘Escape from Mogadishu’: The Latest from South Korea’s...