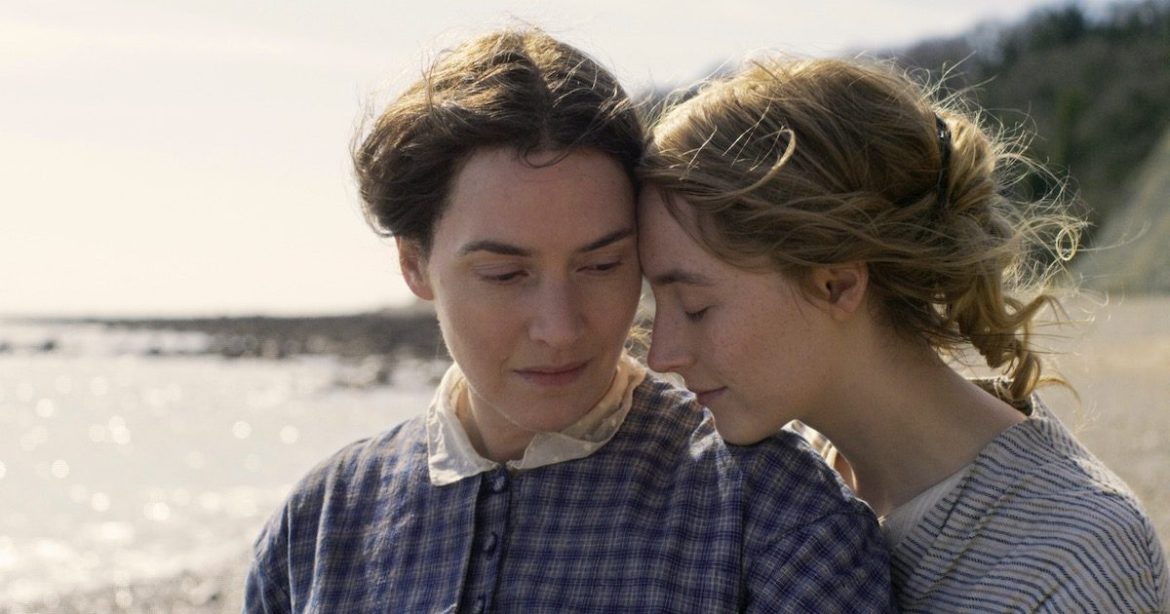 I’m back, folks, with another review of a lesbian period romance. The most recent film to enter this illustrious canon is Ammonite, written and directed by Francis Lee. Ammonite stars Kate Winslet as Mary Anning, a renowned British paleontologist, and Saoirse Ronan as Charlotte Murchison, British geologist and rumored to be Anning’s longtime lover. Putting aside any debate on the facts of the real people, Ammonite is a gorgeous, sensory love story that leaves its audience hopeful rather than devastated.

If God Hates Gays Why Do We Keep Winning

My longtime readers, friends, and fans alike will have picked up on the fact I was excited about this film months ago. I have been infatuated with both Winslet and Ronan for years, and Lee seemed a capable writer-director after his success with God’s Own Country. I am always wary of men telling sapphic love stories, but after watching, I have to commend his achievement. Ammonite feels intimate without being graphic, and the love story develops naturally and beautifully for no one else’s eye, so it seems.

The basic premise is that Mary, selling fossils in Lyme Regis, is paid by Roderick Murchison (James McArdle) to be a companion for his wife, Charlotte, while he travels. While Mary and Charlotte dig up fossils and get to know each other, the two fall in love. It’s relatively standard fare for a period drama, somewhat reminiscent of Portrait of a Lady on Fire. While the plot feels familiar, Lee does an excellent job of using it to really deepen the characters and show a lot of their complexities. Ronan and Winslet are astounding individually, and their chemistry is through the roof from the moment they meet. Throughout Ammonite, there were real stakes and a real love between Mary and Charlotte that was expressed beautifully. 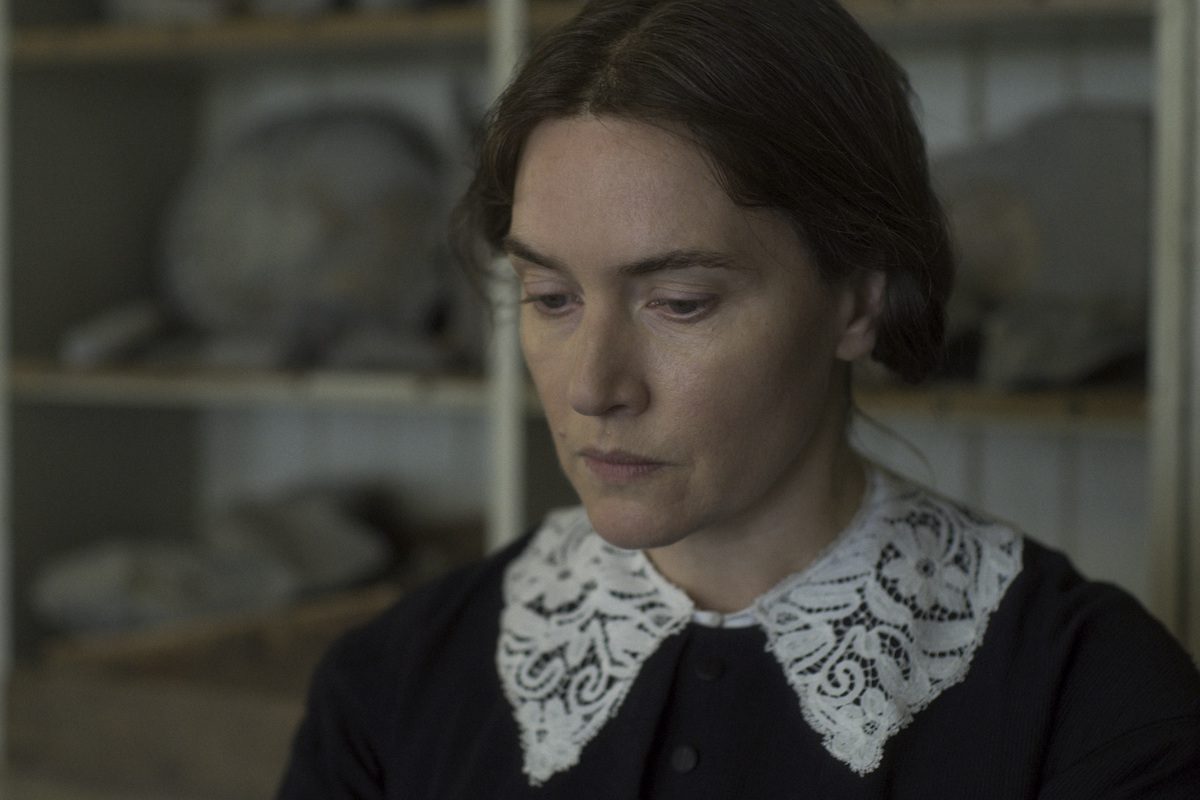 Sapphics by the Sea

Lee does a great job of creating a gorgeous atmosphere, and I often felt almost overwhelmed at how in it I felt. The movie has an interesting relationship with its music, which I will touch on later, but Lee’s decision to focus on the ambient sounds of the beach, Mary and Charlotte’s breathing, the chiseling of the fossils, boots on the cobblestones, even the needlework, really transports the viewer into this world. That’s not even to mention the absolutely stunning visuals from cinematographer Stéphane Fontaine, who also knocked it out of the park in a little film from 2016, Jackie. This all, of course, also gives credit to the different art directors, costume designers, and sound engineers, who I hope are recognized this award season for how intense and sensory they made this production.

As I mentioned, the film, and Charlotte, have an interesting relationship with music, engaging in any sort of soundtrack very sparingly. There are no more than a half dozen scenes with any sort of music, and at least two of those only have music because it is in the diegesis. While I believe this to be an intentional choice to focus on the environment and the very natural and organic relationship that evolves between Mary and Charlotte, it plays another role as well. Charlotte, as played by Ronan, is remarkably beautiful and charming, but deeply depressed and somewhat stunted by her life. Only when she falls in love with Mary does she begin expressing herself through music, playing on the harpsichord and enjoying the recital at Dr. Lieberson’s (Alec Secăreanu) home. Only then, as well, does any sort of instrumental come in through the soundtrack.

I don’t claim to be an expert in scoring or music at all, besides being a devoted Swiftie, but I think Lee’s choice to keep the music to a minimum really enhances the shallow breaths of realization, the scratch of a pencil, and the ruffling of skirts that all tell the story of these two women falling in love.

Ronan and Winslet are absolutely dynamite together. While I lament the choice to cast two straight (according to public knowledge) actresses to play sapphics, I think the two leads do an excellent job. Winslet, with her excellent accent work and perpetual frown, provides a cold yet interesting portrayal of Anning. It counters Ronan’s naive and open, if melancholy, Charlotte. It’s hard to highlight either of them as a particular standout, since you need one to have the other. I do have to commend Ronan’s impeccable British accent, and she continues to prove herself as one of the most dynamic actors on screen today.

I would, of course, be remiss not to mention the absolutely amazing sex scene towards the end of this film where Saoirse Ronan sits on Kate Winslet’s face. I’m going to give my fellow sapphics a moment. You read that right! I know what you’re thinking, “Anna, you said this wasn’t graphic!” and honestly, it isn’t! It’s a gorgeous scene where the love these two characters share is manifested in a beautifully choreographed sex scene. Even with how much the audience sees, it’s tasteful yet primal, beautiful yet raw, and loving yet intense. It’s probably the best sex scene I’ve seen on my screen this year, and yes of course I am counting Normal People. I have to give Lee, Winslet, and Ronan all an immense amount of credit for how intimate and lovely they made this scene, and the film as a whole. 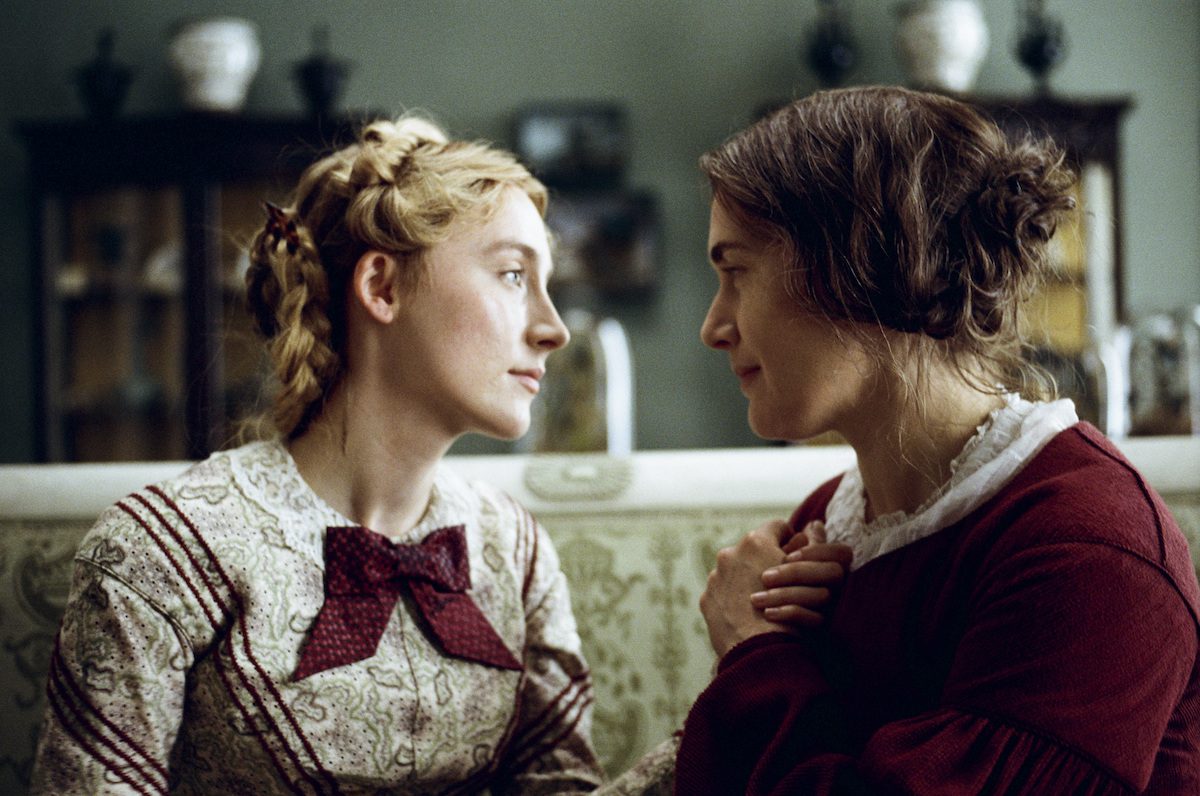 Could This Be Enough?

The last scene of the film, after Charlotte has asked Mary if she will live with her, sees the two of them in a standoff at the British Museum, looking at the first fossil Mary ever unearthed. There’s a tension, and a bit of anger in Mary, because she never wants to be put in a cage. But, the audience is left to wonder if it’s a cage Mary fears, or being at the mercy of Charlotte. While it’s not exactly a happy ending, it’s definitely more hopeful than the endings of other films of the same ilk. These two women are given a chance to be in each other’s lives forever, even if it can’t be in the way they deserve. It’s a downright victory when compared to the ending of Portrait. But, is it enough?

When Ammonite was announced, Twitter users everywhere were asking why sapphics couldn’t come out of the candlelight. Why do all our love stories take place in the past? Why do any modern ones involve coming out or hate crimes? Are we not allowed complete unabashed joy? Are sapphics doomed to passionate love affairs with our friends, colleagues, or roommates, with no opportunity to come into the light?

I loved this film, I will watch it again. I hope we continue to open the door to queer love stories of all kinds. However, that doesn’t always have to be the plot, conflict and all. Sometimes, queer people, and particularly sapphics, have rather lovely lives without such dire circumstances, and their love life is not the most interesting thing about them. I hope with the success of films like Ammonite, we can see more progress made, and we can see excellent representation in all genres, not just period romances. I do love an old-timey dress, but queers are alive today, too.

Thank you for reading! What are your thoughts on Ammonite? Comment below!