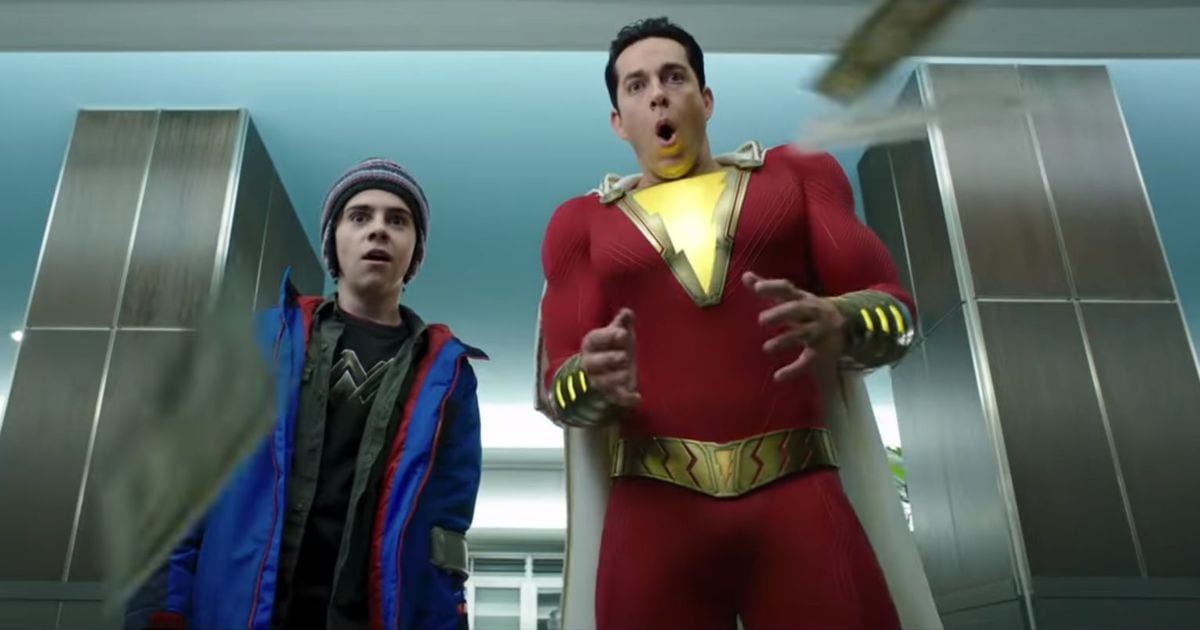 Shazam! was just released on DVD and On-Demand platforms. While the film is modern, it is not well-known in pop culture and the character of DC Comics “Shazam!” is a deep cut, a far-reach of recognition and popularity to the common viewer. Even then, the film does a great job of spelling things out and relating to more common heroes like Batman and Superman to ground the viewer in the superhero realm.

For folks with an affinity for the world of superheroes like myself,  the film does a great job of planting seeds and allusions that not only entertain but fill our nerdy egos with joy.

Shazam is the alter ego of a teenaged orphan, Billy Batson (Angel), who can turn into a superhero with several abilities ranging from flight, super speed/strength, and the ability to shoot lightning from his hands by speaking the word “Shazam!”. By the mid 50’s Captain Marvel (Shazam) was sent a cease and desist order by DC comics for its likeness to Superman. Fawcett sold the rights to DC and Captain Marvel has since gone through many changes and cancelations over the years. For instance, the biggest change was the rebrand and renaming to Shazam to avoid confusion with the Marvel Comics counterpart. The name “Shazam” comes from an acronym for the six “immortal elders”: Solomon, Hercules, Atlas, Zeus, Achilles, and Mercury. 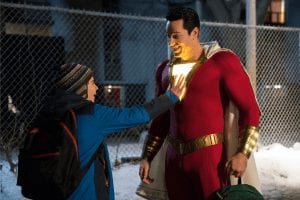 As mentioned above, Shazam was first known as Captain Marvel.

Shazam (then Captain Marvel) was first published in 1940 by Fawcett Comics and was one of the most popular comics of that decade.  An allusion was made to this origin in the film by having characters attend Fawcett School. 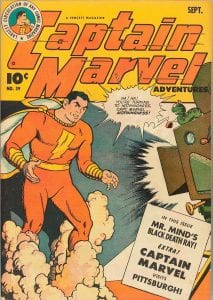 With his chiseled frame and Clark Kent jet-black hair, Shazam looks and feels like he is from another decade.  He is your stereotypical hero put in an atypical situation.

Shazam was made before my time and I wouldn’t have any familiarity with the product if it weren’t for a binder of comics my uncle gave me when I was 8 years old. Amid the collection was a few Shazam! comics. I gravitated toward these immediately. My imagination raced with the thought of being able to change my 8-year-old self into a superhero. What kid doesn’t dream of that?

There’s another great review for the film right here on MovieBabble which provides a great alternative perspective.

Where Does this Flick Fit In? (The DC Extended Universe)

Shazam is not the DC universe’s primary workhorse (Batman, Superman, Green Lantern, Flash, etc.) and because of that, the filmmakers had more freedom to work with.  They also had a humorous and original storyline and were able to take the superhero genre and turn it on its head.  In the same vein as Deadpool, Kick-Ass, and Super, this film mends superhero meta-awareness with an actual superhero film. Shazam! pulls it off in a way that doesn’t feel forced and any mistakes it does make are forgivable.

I am a bit unplugged from the DC Extended Universe and haven’t seen any of the previous films except for Man of Steel — and probably for good reason considering the perceived quality of the other films — but this film feels fresh. Shazam! is aware of the cliches it exploits (and there are many). Because of this, the film stands out from the others in the Universe: 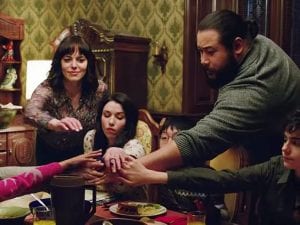 While Shazam/Billy Batson is certainly the star of the show, I’d be remiss if I didn’t shine a spotlight on the real heroes featured in Shazam! and that is the characters of Rosa (Marta Milans) and Victor Vasquez (Cooper Andrews). These two characters serve as the foster parents of our protagonist and his peers, and their unending love, patience, and ability to not jump to judgment is a powerful and endearing point in this film that shines brightly throughout.

Jack Dylan Glazer (It, Beautiful Boy) is another powerful character worth highlighting. He has standout scenes as the supporting role of Freddy Freeman and is one of my favorite young actors active right now. His comedic timing (along with the rest of the cast) is spot on and truly helps to move the action along.

The Cachet of Cliché

This flick started like most superhero films. The dialogue, costumes, and set design looked like they were chosen by someone who had taken a class on fantasy films but never actually seen one. Everything felt cliché; the wizard costume was laughable and the dialogue between the antagonist and his father was cringe-inducing and transparent.  The plot plods along predictably, but the delivery takes a sharp turn at about the 20-minute mark. The director and cast pull back the curtain and lets the viewer know that they aren’t going to take themselves too seriously and that many of these clichés were exploited on purpose. Some of the clichés they use include a hero or villain with an alliterative name: Billy Batson, Peter Parker, Bruce Banner, Lex Luthor, or Donnie Darko (that last one is a chat for another day), or the trite tragic origin story involving lost parents.

Did the Film do Shazam Justice?

The film is rated PG-13, as the youth featured get into hijinks and colorful debates surrounding superpowers, stopping crimes, and testing feats of strength. The majority of the swears are there for shock value and don’t further the dialogue of the scene. I wish I could share this film with the young folks in my life, but because of the expletive language, it will have to wait. Maybe a cleaned-up version (like Deadpool 2) could be released so the younger audience can be involved too.

The film clocks in just around the 2-hour mark and at times can feel like a scene is drawn out more than it needs to be, but those moments are seldom. This film is great and approachable to most with its great effects, superb acting, and fun story.

Thank you for reading! What are your thoughts on Shazam!? Comment down below!