Remembering ‘Star Trek: The Motion Picture’ on Its 40th Anniversary 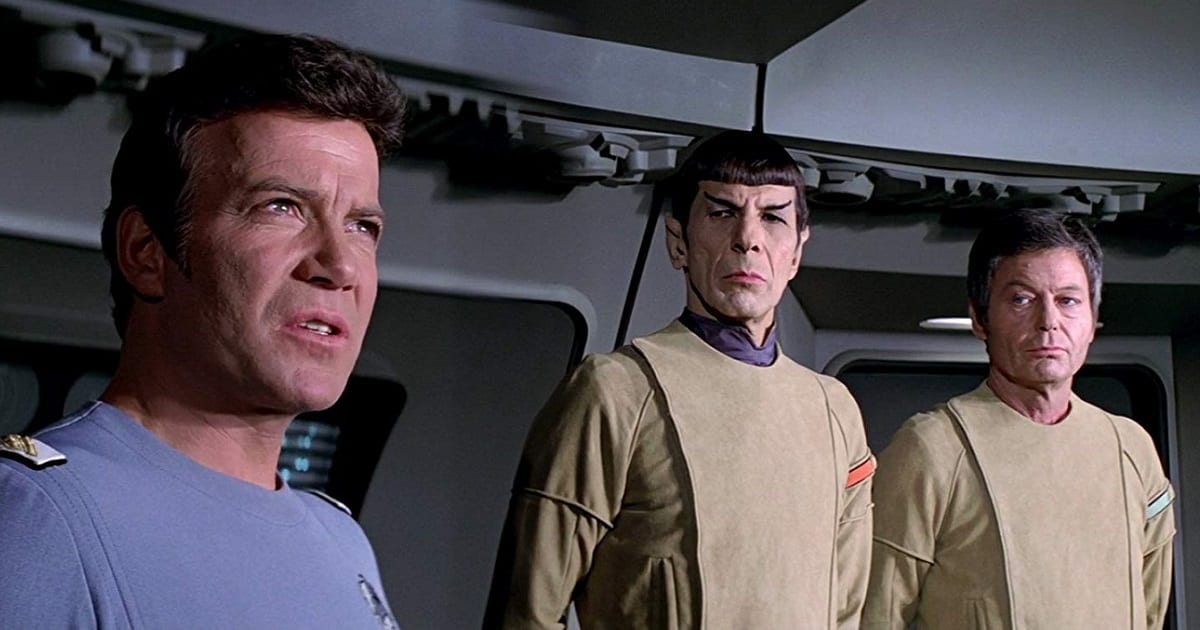 Journey back to the seventies, to an era of cinema where moviemakers wanted to make sure you knew you were watching a movie by giving their productions titles like Superman: The Movie and Star Trek: The Motion Picture. In the first feature film to break into the Trek-verse, we get reintroduced to all the original characters from Star Trek: TOS such as Leonard Nimoy‘s Mr. Spock and William Shatner’s James T. Kirk.

While the movie is an epic in consideration of the proportions of the scale and grand scenery of the cinematography, it can be quite tiring to sit through. Like any good action/adventure movie, a goodly portion of the runtime is dedicated to finding the various characters where they are in their careers and in their journey through life.

For Scotty, Sulu, Uhura, and Chekov, not much has changed. Kirk has acquired the superior rank of admiral. Nurse Chapel is now Doctor Chapel. Dr. McCoy has grown a beard, but little else has changed in regard to either his attitude or appearance. And Spock kind of fell out of the picture for a number of years. Come to find out, he had dedicated his time away from Starfleet to solitude, contemplation, and the pursuit of logic.

Specifically, we find Spock on Vulcan, where he has been dwelling in the desert. At the end of this trial, he approaches a small group of Vulcan elders who are prepared to bestow a new honor on him, the manifestation of which is symbolized by a customary necklace. However, Spock declines this rank as he feels his calling is elsewhere. Through this sequence, I couldn’t keep my eyes off one of the elders, who was bald. A Vulcan with his pointed ears and who is devoid of hair looks an awful lot like the vampire Count Orlok from Nosferatu.

Once Spock takes his leave of the Count and the other two Vulcan elders, we soon discover his authentic calling: joining his old companions aboard a refurbished Enterprise. From there on out, the audience is exposed to minute after minute of entrancing light sequences, the egos of two commanders duking it out with each other, and a killer cloud mysteriously attacking Federation starships on a trajectory toward Earth.

Perhaps the best comparison for Star Trek: The Motion Picture to be found among sci-fi cinema of the past decade is Christopher Nolan’s Interstellar (2014). The pacing of both films frequently feels drawn-out; both plunge their characters into deep, uncharted sectors of the cosmos; both have practically unforeseeable plot twists by the time they reach their climactic summits. Yet, a key difference between the two approaches in storytelling is the fact that Star Trek is a franchise which, by 1979, already had an established canon of characters who did not require a great deal of character development.

Nevertheless, as we see in many of the Avengers movies, The Motion Picture needed to take time to at least reel in its cast of players, while not necessarily adding a whole lot to their individual depth of character. The most significant character evolutions are seen in Kirk, ever desirous of reliving the glory days and who eventually (shockingly) swallows his pride in light of Commander Decker’s prudence; in Spock, having a change in spirits from the impersonal, unsociable Vulcan into one slightly more disposed to the comradery of old friends; and in the complicated love relationship between Commander Decker and Lt. Ilia. And in between Dr. McCoy offers some sour and blunt humor through his passing remarks.

It is worth noting that the concept of a foreboding cloud bringing danger with it is not unique within the sci-fi genre, or for that matter in the Star Trek universe. This device of a harmful alien cloud is seen in earlier television productions such as “Deadly Cloud” from Voyage to the Bottom of the Sea and “One of Our Planets Is Missing” from Star Trek: The Animated Series. However, this cloud’s origin and its generator are unique.

In pacing and several of the psychedelic celestial effects, Star Trek: The Motion Picture has been compared to 2001: A Space Odyssey (1968). Truly, a number of the neon-esque color effects in this inaugural Trekkie film are beautiful as well as mesmerizing.

In specific regards to the pacing of the film, it can be quite difficult to grow used to as, just like the infinite void of space, the runtime seems to go on and on. To the modern audience, in particular, it runs the risk of boredom. Beyond that, the philosophical musings shared by Kirk, McCoy, and Spock feel rather loose and to some extent pointless. Furthermore, the conception and the destiny of a life-form resulting from the film’s defining sequence are quite vague.

Star Trek: The Motion Picture serves as a key entryway into the league of Trek features which were to follow but itself offers one of the least satisfying chapters in the franchise. While it lacks various entertainment aspects, it stands as an example of the classic sci-fi adventure story.

Thanks for reading!  What are your thoughts on Star Trek: The Motion Picture?  Comment down below!

[…] Mr. Spock from the Star Trek universe has offered another representation of an almost religious form of abstinence along with an exit from society into a land of desolation. (We’ve discussed the moral attributes of characters in other Star Trek features here.) Following in the line of Christ and saints such as John the Baptist and Anthony of Egypt, we find Spock dwelling alone in the desert lands of Vulcan, his home planet. This happens during the early plot developments of Star Trek: The Motion Picture. […]

I, too, thought this movie was a bit tiring the last time I watched it. I’ve always said it could have easily been edited to a tight 42-minute episode. But, I was also in the theater when it was released, and I remember it feeling like reuniting with old friends. The slow pace felt more majestic then, more important and reverent somehow. Time gives us different perspectives.

I always like this movie and I thought it was a pity Star Trek 2 didn’t follow on in terms of uniforms and so on. Who would wear a jacket and a woolly turtleneck sweater in an air conditioned spacecraft?

I remember standing in line, all us Trek fans excited to see this new incarnation of our show!!
Still excited, because Chris Pine :)

This movie prompted one of the best movie critic lines ever (from Mal Vincent of the Virginian-Pilot), that the three main characters were a bit long in the tooth to go scampering about the universe, toupees aflutter.

We found that out by watching all the features with the original cast members. And yeah, I’d agree.