50 Years Later, 2001: A Space Odyssey is Still the King of WTF Sci-Fi Endings 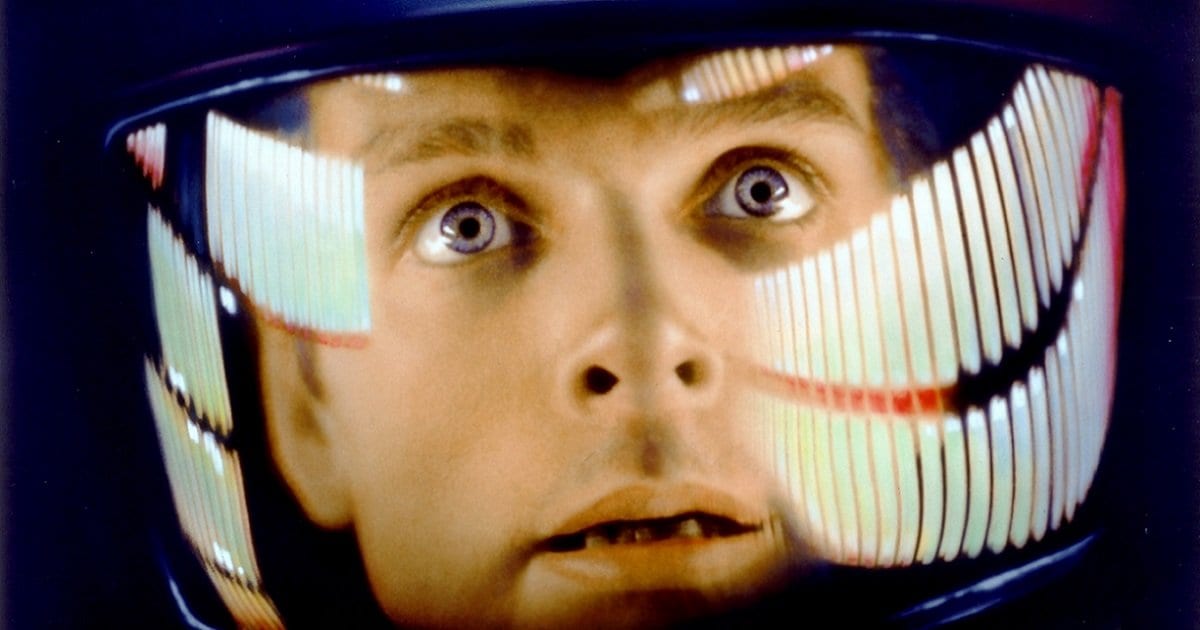 Cut to my freshman year in college.  I’ve made it through half of my first semester, so naturally I think I’m more intelligent and aware of things around me than is actually the case.  My tastes in cinema are maturing as a result, and it’s time to watch a classic movie for the first time: 2001: A Space Odyssey.  I fire up the laptop and start the film, internally preparing for what I was about to see.

The film starts out fairly slow.  After all, a 19-year-old can only take so much of watching miniature space shuttles docking to other structures.  But even with a few apes smashing bones and a monolith seemingly staring at their every move, my feeble brain was able to comprehend what was occurring onscreen.

As the movie progressed towards the meat of the story, HAL fascinated me with its unfeeling inflection — it got under my skin.  His plans were vile, yet fair and poetic.  I saw the subtext, and my ego grew just a tad.

But then, neon stripes flashed through the screen, and my mouth dropped.  The seemingly random images onscreen perplexed me to my very core.  What are these strobe lights?  Why is David in a futuristic bedroom?  HOW IS HE STARRING AT HIMSELF ON HIS OWN DEATHBED????

This was the first time I simply didn’t understand what I just saw in a movie.  Frantically, to save my ego, I searched tirelessly through my phone, hoping that someone else’s half-assed internet research could save my perceived intelligence level.

We’ll get back to that anecdote in a second.

2001: A Space Odyssey is Still a Major Influence Today

April 3rd marks the 50th anniversary of the original release of Stanley Kubrick’s science fiction epic 2001: A Space Odyssey.  But unlike other films that have reached this age, 2001 still has one of the biggest influences on modern science fiction today.  In fact, many directors have noted the film’s influence.  Ever hear of Steven Spielberg, George Lucas, or Ridley Scott?  What about Christopher Nolan?  All of them have directly noted 2001‘s importance on their careers, and their films explicitly show that impact.  You’re lying to yourself if don’t notice 2001: A Space Odyssey‘s general construction in Interstellar.

Christopher Nolan even admits it himself:

Nods to 2001‘s general aesthetic are still commonplace in today’s cinema, and it would take months to properly sift through every influential beat.  Still, there’s one particular element of the film that has clearly touched filmmakers for generations: that wild ending.

2001: A Space Odyssey is primarily a discussion of man vs. technology (along with many, more trippy ideas).  That idea wasn’t new to film — The Forbidden Planet popularized this idea twelve years before 2001 hit theaters.  Kubrick was obviously riffing and expanding on uses of miniatures, music, and themes that other films laid out before him.  But, with 10-15 minutes left, the film takes a major turn, creating something wholly unique.

Twists and reveals weren’t new to film either — The Cabinet of Dr. Caligari (1920) is often considered as the film with the first cinematic twist, and Citizen Kane‘s reveal has clearly stood the test of time as well.  Rather, it’s the way in which Kubrick puts his cards on the table, shedding the film’s somewhat grounded exterior for a drug-induced trip into poetry, that makes 2001: A Space Odyssey different from the rest.  Hard cuts between flashing images turn to a wacky meditation on time and evolution, culminating in that ominous monolith returning once more with David Bowman eventually becoming a heightened being that we can only begin to understand.

Flash forward to 2018.  Annihilation arrives in theaters and perplexes many with its own ending that riffs on the idea of a higher power with a droning score and abstract visualization of its own.  2001 was one of the first science fiction films to combine thought-provoking themes with serious box office success, and it paved the way for the future of the thinking man’s science fiction film; it allowed for modern visionaries such as Denis Villeneuve and Alex Garland to challenge audiences on metaphorical and allegorical levels, ditching the literal for something more that’s equally satisfying for its intended audience.

Kubrick’s masterpiece changed our previous conceptions of science fiction, taking us beyond what is concrete into completely unknown territory — where the limits of reality have no bearing on the narrative.

There might be better or more beloved WTF endings out there, but 2001 opened the door for the obscure to become the norm.

But What About You in College?

After minutes of frantic searching to appear smarter to everyone around me, the ending finally started to make some sense.  From benevolent, alien forces to evolution itself, it was like watching pure poetry in motion.  2001: A Space Odyssey caused a mini-meltdown in my brain — it made me think critically about a film and its underlying themes.  I had to piece together the literal meaning of a film for the very first time. There was no spoon-feeding going on, that’s for sure.

Kubrick stretched my mind that day, and I’m sure the film will continue have the same effect for years after I stare directly into a black monolith myself and transcend what we perceive as humanity.  Without the film, I might not look at the medium the way I do today.  I know others are with me on that one.

Thank you for reading! What are your thoughts on 2001: A Space Odyssey? Do you think we missed any? Comment down below!

Strangely enough, the ending of 2001 is not really what stands out for me. When I first saw it (and all subsequent watches) it was the visual style of the movie that really impressed me. The bone-to-space station cut, or the ‘waltz’ of the spaceship as it docks really blew my mind at the time.

Those moments absolutely blow my mind as well! Clearly this personal anecdote points to a personal connection with the film that others may not feel.

Yep – as a 15-year old I exited the theater in the early evening and, looking up at the moon asked myself, “What the hell was that all about?”
Got Clark’s novelization soon after, read it and then started to truly appreciate the movie.

That would be very interesting to read! I need to get a copy for myself!