‘The Night Clerk’ is an Ethically Dubious Psychological Thriller 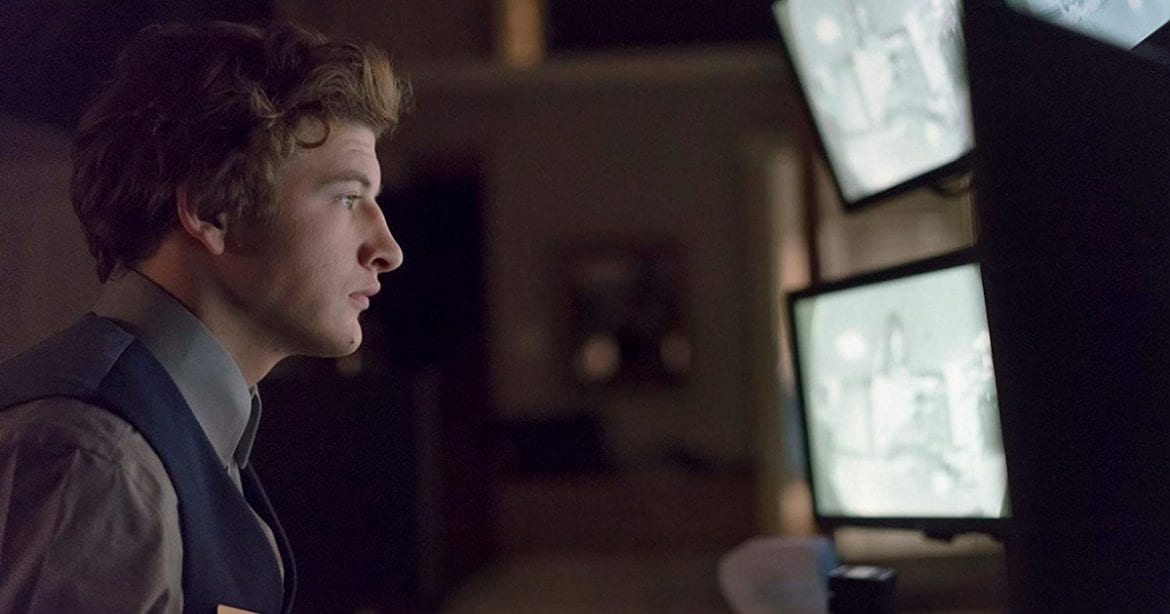 “Someone’s always watching…” Such is the tagline for The Night Clerk (2020), the straight-to-home-rental crime drama from Michael Cristofer. Weaving the yarn of a voyeuristic everyman desperate to prove his innocence, it emulates Sir Alfred Hitchcock. But the most puzzling mystery of all is: does it do the Master of Suspense justice?

Without the stylized homage of Brian De Palma, this watered-down Hitchcockian thriller is like watching one Hitch’s masterpieces through the protagonist’s surveillance camera.

Suffering from Asperger syndrome, Bart Bromley (Tye Sheridan) is the front desk clerk at a hotel who lives with his mother, Ethel (Helen Hunt). After witnessing the murder of a guest, Karen (Jacque Gray), via the minicam he has hidden in her room, Bart becomes the prime suspect. When the object of his fixation, Andrea Rivera (Ana de Armas), starts seeing Karen’s abusive lover, Nick Perretti (Johnathon Schaech), Bart must save her while, at the same time, protecting the secret of his voyeurism and proving his innocence to Detective Espada (John Leguizamo).

What The Night Clerk Gets Right

For starters, the neurotypical Sheridan is as transformative as Dustin Hoffman in Barry Levinson’s Rain Man (1988). Also, he is as creepy as that other boy next door who shacks up with his mom and works as a desk clerk, Anthony Perkins in Hitchcock’s Psycho (1960). Post-David Fincher’s Gone Girl (2014), the unreliable narrator is in vogue for this genre of storytelling. Indeed, Kristi Shimek’s editing strategically cuts away from the gunshot at the moment Bart enters Karen and Nick’s room before we get to get to see who kills her. To be sure, Sheridan is as handsome a movie star as Cary Grant in Hitch’s North by Northwest (1959), one of the greatest “wrong men” in cinematic history. However, Bart’s character humanizes him into a James Stewart everyman right out of Rear Window (1954).

Although not exactly a “Hitchcock blonde,” Cristofer still directs out of de Armas a femme fatale foil to this psychologically damaged noir antihero. Her beauty is as treacherous a siren’s song as Kim Novak’s in Vertigo (1958), which is all there is to be written about her performance-within-a-performance that doesn’t spoil the climactic big reveal. Suffice to say, in a cast with such big names as Hunt as well as Leguizamo, de Armas shines as the breakout star of this generation after Rian Johnson’s Knives Out (2019).

What The Night Clerk Gets Wrong

Aside from the effective editing, the starstruck acting, and the competent directing, the writing in The Night Clerk (which comes from a screenplay by Cristofer himself) is the production’s Achilles heel. It is not the dialogue, which is smart enough to draw out a laugh here and there, so much as it is the identity politics of Bart and Andrea’s characters. To begin, the neurodivergent Bart’s voyeurism is all but a result of his neurodivergence. Plus, he is a straight, white incel who may or may not shoot the women he impotently spies on, which casts him as an unethical main character for the audience to root for in his quest to prove he’s a “nice guy.”

Additionally, the feminism in The Night Clerk also marks a regression. The voyeur is portrayed as the “real” victim of the “male gaze,” as one of the female characters manipulates his voyeurism to weaponize the “false accusation” myth against him. Not to mention, the negative intersectional representation of de Armas’s gender and ethnicity makes it doubly problematic because of the oppression Spanish-speaking American immigrants are facing under the current administration.

While these shortcomings are built into the film’s influences (the very title of Psycho is an ableist slur, and Vertigo blames the self-destruction of its abusive leading man upon the duplicity of its leading lady), Hitchcock succeeds where The Night Clerk fails because of his artistry. The Night Clerk may remind you of some of the most powerfully crafted pulp fiction ever put to celluloid, but that’s not enough to make it one of the greatest. It has nothing to say that hasn’t already been said before, and better.

Clocking in at a runtime of ninety minutes, The Night Clerk is a well-oiled genre vehicle. It does not meet Hitchcock, but at least it is not pretentious enough to try and surpass him. Decidedly, it is a modern deconstruction of obsession, with technology functioning as the fetishistic consummation between the antisocial male and the objectified female. It could have been a microcosm of the dystopia found in Stanley Kubrick’s A Clockwork Orange (1971) and a contemporary update on Michelangelo Antonioni’s Blow-Up (1966) — and, for that matter, De Palma’s Blow Out (1981). During this age of post-September 11th invasions of privacy, the Hitchcockian themes on sex and death — the alpha and omega of the human condition — are as married to surveillance as they are in The Night Clerk.

One only wishes Cristofer’s ambition was equal to these auteurs.

Thank you for reading! What are your thoughts on The Night Clerk? Comment down below!