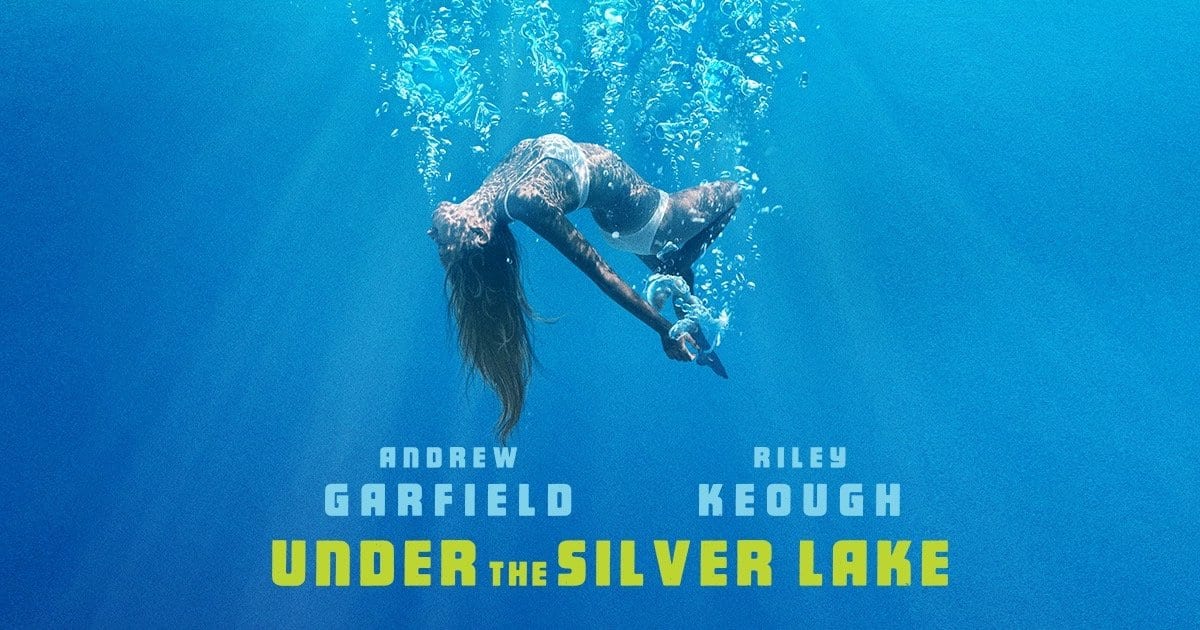 From the Illuminati to backmasked satanic messages on Led Zep albums, the world has always loved a good conspiracy theory. And (no) thanks to the success of pundits like Rush Limbaugh and Alex Jones, we’re now living in a golden age of conspiracies. Throngs of people genuinely believe that the Holocaust and the Sandy Hook massacre never happened, that planes deliberately release toxic chemicals into the atmosphere, and so on.

It’s obviously unwise and even dangerous to spread such ideas. Buying into them often seems like a one-way ticket to madness. David Robert Mitchell’s wild, ambitious neo-noir Under the Silver Lake ostensibly tells a story about the side effects of going down a conspiracy rabbit hole. However, closer examination reveals it to be a mockery of conspiracy itself.

Sam (Garfield) is a thirty-something, womanizing slacker living on the east side of Los Angeles. One morning, Sam discovers that his new neighbor Sarah (Keough) has disappeared, not long after the similar vanishing of a local billionaire philanthropist. Sam embarks on a mad scramble across L.A. to find Sarah. He finds himself plunging further into the peculiar underbelly of the city in search of the truth behind a series of increasingly disturbing interconnected mysteries.

Mitchell’s previous film, the horror thriller It Follows, presents an interesting look at human sexual behavior and the fears and anxieties surrounding it. Sex, in that film, takes on the form of a mysterious, sinister force that can literally send people to their deaths. Desire for intimacy pits itself against the desire to live.

In a sense, Under the Silver Lake can be seen as a companion piece to its predecessor. Sex — or, at least, his libido — drives everything Sam does, each decision he makes. From the very beginning, when we see Sam spying on a bathing suit-clad Sarah from his balcony, we observe his true nature. The dude’s a total cad — a pathetic creep who has never formed a meaningful relationship with a woman in his life.

In fact, it’s his sexual desire for Sarah that ultimately triggers his entire bizarre journey through L.A.’s cultural underworld. He almost seems to envision himself as a sort of knight in shining armor on a quest to rescue his damsel in distress. We all know, however, that his intentions are far more base.

Mitchell films his entire story — every naked, gyrating body — through Sam’s sweaty, objectifying gaze. It makes us uncomfortable, but that’s because we’re supposed to feel that way. While Mitchell never outrightly condemns the actions of his misanthropic, whiny-voiced “hero,” but it’s obvious we aren’t intended to root for the guy. 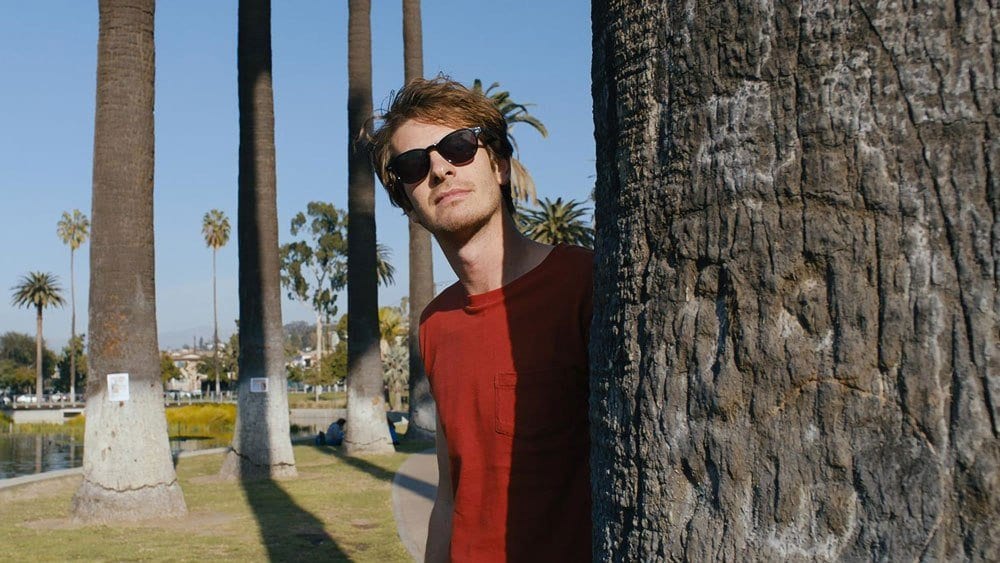 It’s All One Big Conspiracy, Man!

Under the Silver Lake openly laughs in the face of all who believe in conspiracy theories, even while it’s depicting Sam’s paranoid journey.

When Sam regales an aspiring actress friend (Lindhome) about the wealthy inserting subliminal messages in media, the friend looks understandably concerned. So does Sam, when he hears a local cartoonist (Fischler, playing an even more jaded version of his character from Mulholland Dr.) obsess over mythical serial killers. The man suggests a map on the back of a cereal box holds the key to his lifelong search, to which Sam flatly replies, “Seriously?”

And yet Sam engages in his similarly trivial pursuits — presumably because he’s got nothing better to do. Indeed, when you watch Sam spend hours struggling to decode a hidden message in pop lyrics he’s scrawled onto an empty pizza box, all you can think is, “Good Lord, somebody find this guy a job!”

Sam is the product of a generation of men with no ambitions to pursue except getting high and reading their dads’ old Playboys. He’s like a modern counterpart to the obsessed characters Jimmy Stewart plays in Hitchcock’s Vertigo and Rear Window. Only he probably smokes way more weed than either of them ever did.

Speaking of Hitchcock: Mitchell’s film practically oozes with homages and references to classic Hollywood. The original music by Disasterpeace (who also composed the atmospheric synth music for It Follows) effortlessly channels a Bernard Herrmann score or an old MGM musical. Its frolicking woodwinds and soaring strings lilt and swell at all the right intervals. The music in Under the Silver Lake practically becomes a character itself.

Sam plasters his walls with old Abbott/Costello and monster movie posters. On the night they meet, he and Sarah get stoned and watch How to Marry a Millionaire together. The faces and names of dead celebs are everywhere, from a Grace Kelly face mask to a bust of James Dean to the graves of Janet Gaynor and ol’ Hitch himself.

It’s rather amusing, then, to see all this glowing iconography juxtaposed with Mitchell’s vision of a shallow, plasticky modern L.A. Sam moves through an impossibly hip bohemia rife with posers, opportunists and moneygrabbers. We hear tell of 12-year-old showrunners and “big action movies based on household cleaning products.” Smarmy, overdressed producers chat up easily-impressed nitwits at cocktail parties. And Sam’s bar buddies (Grace, Simpson, et al.) turn out to be just as callow and insufferable as he is. Think Mulholland Dr. as directed by Judd Apatow.

Everyone in Mitchell’s Hollywood is kind of full of it. It almost makes you wonder whether those sacred images of the city’s past ever deserved our reverence. What if everyone in town was always this annoying?

Yes, Under the Silver Lake is extremely self-indulgent, a trifle overlong, and a bit too convoluted for its own good. And yes, its juvenile penchant for gross-out gags frequently threatens to derail the entire thing. But once you acquire a taste for its eccentric universe, it’s extremely entertaining. Just don’t treat it like it’s a puzzle to be solved.

Thank you for reading! What are your thoughts on The Intruder? Comment down below!