60 Years Later, What Can Vertigo Tell Us About Ourselves? 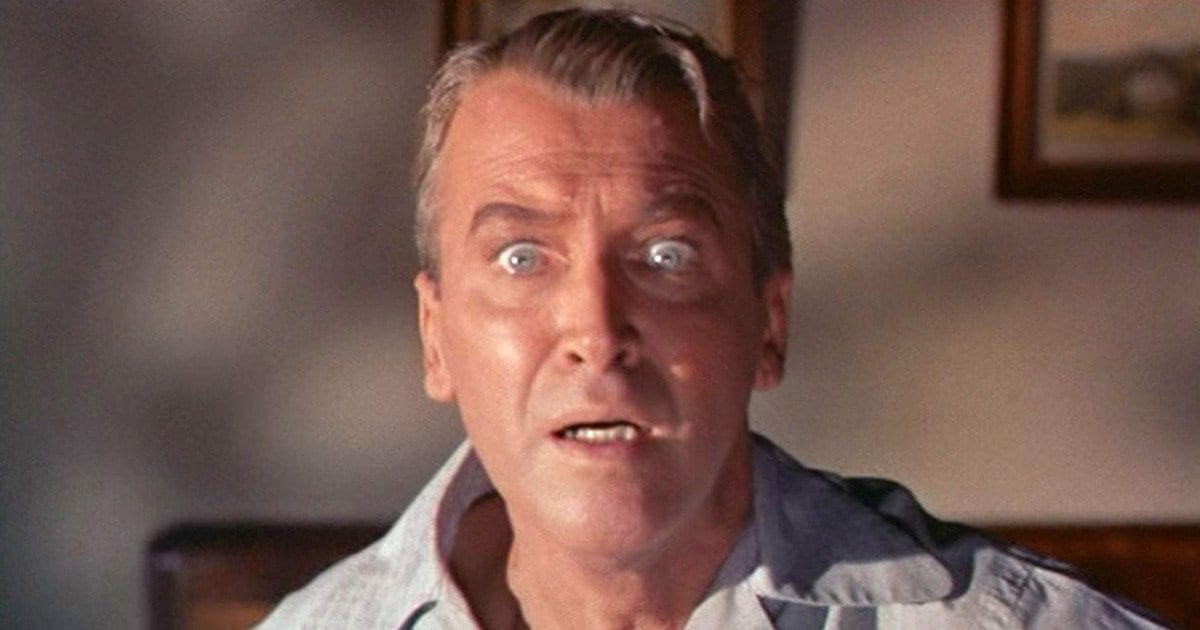 I recently rewatched Alfred Hitchcock’s 1958 classic, Vertigo, because it made it onto TCM’s list of Fathom events in celebration of its 60th anniversary. In my childhood, I saw the film at least four or five times, which was pretty moderate considering the numerous times I watched some of Hitchcock’s other films, like Suspicion, Notorious, and Rear Window. My obsession with classic films was almost on the level of the obsessive love affair we see in Vertigo. But, despite my interest in old movies, Vertigo, unlike Hitchcock’s other films, left a weird vibe hovering over me. It was a pretty stressful film, partly due to its dark ending, but mostly because Hitchcock made me slightly ill-at-ease with his portrayal of a normal, older man — a skeptic with a good head on his shoulders — who succumbs to an unhealthy obsession with a mysterious blond.

At first this sounds like a fairly clichéd plot, but the impact of Hitchcock’s storytelling is that it makes it seem plausible that any one of us could descend into a similar pit of obsession. In fact, Hitchcock himself tumbled into vertiginous obsessions with his leading ladies, which strongly parallels what we see in Vertigo. This makes the film true to the director’s own life. Aside from the part about the murder. Hopefully. 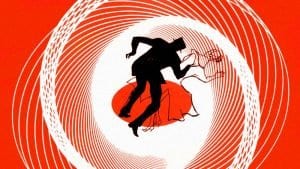 In the beginning, we meet a retired detective, Scottie (Jimmy Stewart) and his friend and former fiance, Midge, who serves as the realistic counterpart to the enigmatic Madeleine (Kim Novak) who Scottie later falls in love with. From the start, we learn that Scottie has a debilitating fear of heights that was triggered by a police chase that left him dangling from a rooftop, where he watched a fellow officer fall to his death.

His friend Gavin asks him to come back to detective work so he can find out what his wife is up to when she’s out and about. Though she leaves the house for long periods, she doesn’t have any memory of where she goes. Though at first reluctant, Scottie’s lured in by Gavin’s story that Madeleine might be possessed by the spirit of her 19th-century ancestor, Carlotta.

Scottie trails Madeleine and finds her kneeling at Carlotta’s grave and sitting in front of her portrait at an art museum. The two get together when Madeleine, seemingly possessed, jumps into the San Francisco Bay and Scottie comes to her rescue. From that point on he becomes fully captured by her vulnerability and mysteriousness. The plot takes a disturbing turn when Madeleine and Scottie visit the Mission San Juan Bautista. She runs up the spiral staircase in the church which leads to the top of the bell tower. Scottie runs after her, realizing she’s attempting suicide again, but his vertigo kicks in before he can save her and she apparently falls to her death.

He’s in a state of shock after her death until he meets a woman, Judy, who seems like Madeleine’s doppelganger. This is when Scottie’s obsession goes to extreme levels. He pressures Judy into changing her clothes, makeup, and hair, and he pleads with her to let him take care of her.

Judy’s resemblance to Madeleine is peculiar, but it’s explained when we learn that she and Madeleine are the same woman. After he makes her over, Scottie sees her put on the necklace that Carlotta wore in her portrait, then his detective’s mind goes to work and unravels Gavin’s nefarious plot to murder his wife — using Madeleine to act the part of his wife. 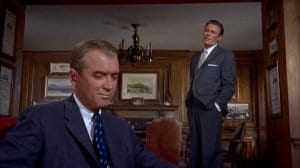 During my rewatching of Vertigo, I noticed power came up a fair amount, not just in the storyline itself, but in the character’s own words. While Scottie’s roaming Gavin’s office, he spots an old painting on the wall, and Gavin waxes nostalgic about the days when men had “power and freedom.” In an odd coincidence (or maybe not), the historian who tells Scottie about Carlotta expresses his own nostalgia in roughly the same way.

So why do power and freedom come up so much in the film? My impression is that it speaks to an underlying desire that motivates Scottie and Gavin, and, well, just about everyone: the desire to transcend our limitations and use the power and freedom that comes with it to make our romantic dreams a reality. But whether those dreams can really make it to reality, however, is debatable.

Perhaps this is why Scottie needed to be a relatable, average guy — he needed to be like all the people in the world who are content with their lives. But gradually, desires similar to Gavin’s are awakened in him, as they could be in all of us. 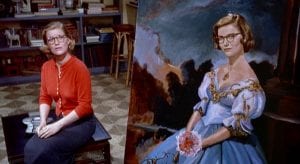 In the Good Old Days

When I’m not obsessing over old movies and plays, I’m often on YouTube looking at some of the oldest footage available of everyday life; often until my eyes are bloodshot and I’m nearly experiencing vertigo myself. Well, maybe not to that extent. But the desire to get in touch with the past is certainly strong in me, as I suspect it is in all of us to varying degrees. That’s why the nostalgia in the film is one of the ingredients that makes Vertigo so haunting.

But nostalgia can be deceptive, just like Galvin and Madeleine. The characters of the movie are ensnared by a narrative of the past that comes from art, books, and word of mouth. In other words, they’re caught up in some vague, untouchable form of a time that was once as real and often as mundane as our present. But the characters nevertheless look to the past for something better, more romantic than what they have.

Midge provides the down to Earth perspective in the film. She recreates the Carlotta painting, imposing her face over Carlotta’s somber expression to bring a dose of humor and realism to Scottie’s romantic world. It also can be seen as a reminder that the past isn’t distant and ideal as it appears in our imaginations. 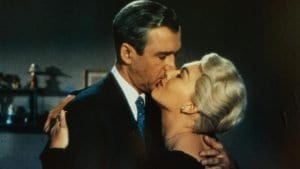 Hitchcock had more of that power than most of us have. This gave him the ability to mold his starlets in the form he wanted, just to bring his own romantic vision to life. He was also notoriously cold-hearted when he went about the molding process. Scottie is certainly a stand-in for Hitchcock in this respect, and it makes me wonder how Hitchcock would have dealt with his obsessive tendencies if he hadn’t become a director. Perhaps they would have remained latent or just confined to his private fantasies.

Maybe he would’ve acted out his desires like the rest of us often do, by trying to alter our significant others — to the extent we can — and then getting frustrated if our efforts fail. Perhaps the molding of a lover is something few of us would do in the way we see it happen in Vertigo. But is that because we wouldn’t or because we can’t?

Thanks for reading! If you’ve seen Vertigo before, what was your impression of it? Does it deserve to be considered one of Hitchcock’s best films?

[…] “Only one is a wanderer. Two together are always going somewhere.” Located at the intersection between mental illness and young love, Brett Haley’s All the Bright Places (2020) will be worth a visit from any fans of romance. Adapted to Netflix from Jennifer Niven’s bestselling 2015 novel of the same name, the teen drama marks yet another early-in-the-year grand slam for the increasingly prestigious streaming service after Lana Wilson’s Miss Americana (2020). With a screenplay by Liz Hannah and Niven herself — who now counts herself among the same class as the multitalented Gillian Flynn after Hollywood trusted her enough to adapt her book into David Fincher’s Gone Girl (2014) — Elle Fanning stars alongside Justice Smith. Taking a page out of Margot Robbie’s playbook in Cathy Yan’s Birds of Prey (2020), Fanning is also credited behind the camera as a producer. Together with Hannah and Niven’s writing, these women balance out this male-directed production with sensitivity to feminist theory. […]

I used to love Vertigo as I did most of Hitchcock’s films. But, my last view was a different experience (a few years ago). Scotty’s obsession felt creepy for the first time. And, I’d learned a lot more about Hitchcock and could sense his projection.

Very thought provoking post and thanks for your perspective.

I didn’t get Vertigo, which is ironic being a fan of both Stewart and Hitchcock