‘Inside the Rain’ is Consistently Inconsistent 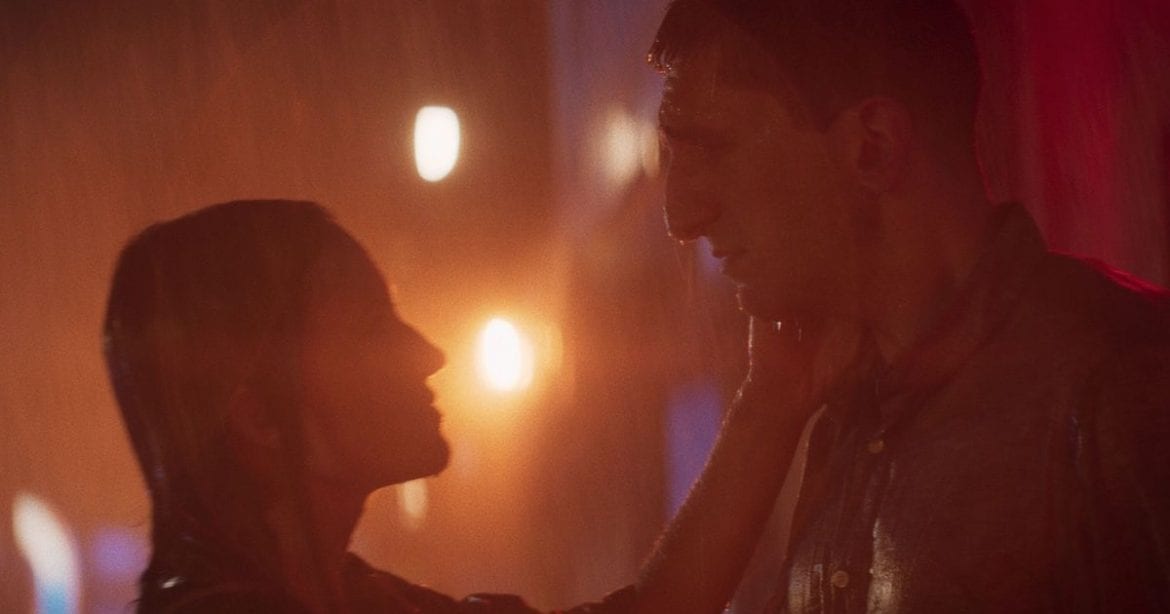 One of the very, very tiny benefits of the current state of the world which is otherwise forcing me to have an existential crisis every twenty minutes is the ability to discover some of the smaller, more peculiar films that have come out in 2020. Frankly, Inside the Rain most likely wouldn’t have been on my radar if things were somewhat normal. After a short stint in theaters — one week in one theater, to be exact — Inside the Rain landed on streaming platforms with the rest of the movies that unfortunately had their runs cut short. (You can stream the movie for free with ads on Tubi.)

Although, watching Inside the Rain at home, with the ability to pause it as necessary, might be the best-case viewing scenario because it’s unquestionably a chore. Shifting from romance to comedy to drama with the help of some pretty jarring surf music riffs (one being “Comanche” from the gimp scene in Pulp Fiction), finding equilibrium is next to impossible. The fairly amateurish staging doesn’t help, either. But those rapid swings reflect the writer, director, and star Aaron Fisher, who suffers from bipolar disorder.

The events of Inside the Rain aren’t exactly biographical, but they have a strong resemblance to the struggles Fisher dealt with in his 20s. Fisher plays the lead character Ben Glass, who has recently switched schools after his most recent mental episode. He suffers from many neurodivergenices, including bipolar disorder, ADHD, OCD, among others. During another one of his episodes brought on by romantic frustration with a fellow student Daisy (Katie Claire McGrath), Ben swallows a handful of his pills in an attempted suicide, later waking up in the ICU with the dean of the college hovering over him and warning that another episode will lead to expulsion under the college’s strict two-strike policy.

A misunderstanding between Ben and Daisy ensues once Ben is discharged from the hospital, causing Daisy to call the police in fear of another suicide attempt. Naturally, the fiasco brings the dean back into the picture, who quickly expels Ben from the campus. Disgruntled by the entire process, Ben vows to make a fictional short film, recreating the events of the weekend, which in his mind will prove his innocence.

Both his therapist (Rosie Perez) and parents (Paul Schulze and Catherine Curtin) rail against Ben’s decision to appeal the school with a film. Ben’s former film professor even shakes his head in disagreement. The only people who moderately believe in his vision are washed-up producer Monty Pennington (Eric Roberts) and sex worker Emma (Ellen Toland).

Ben’s determination is unmatched, and a lot of the tension comes from him working through his personal (others would call it “foolish”) journey for understanding, even bluntly titling his short film A Huge Misunderstanding. Ben is entirely focused on his project, clearly frustrated about his situation and, more broadly, his neurological differences. Inside the Rain holds a lot of value by taking the viewer through the wide mood swings of its main character and creator.

Aaron Fisher delivers his lines bluntly and seemingly without the standard emotions that one would approach certain scenes. These stilted scenes, while not aesthetically pleasing in the slightest, provide a considerable amount of understanding, as if Fisher is working through a lot of his personal struggles and still cannot totally find the words to explain his afflictions through his acting, writing, and even directing. That’s not to say Inside the Rain is good only because Aaron Fisher is discussing his neurological differences on camera — that viewpoint is excruciatingly condescending and accomplishes nothing. I gained a strong sense of empathy for his condition as he tries to make sense of it all, similar to how Shia LaBeouf and Ben Affleck worked through their troubles in Honey Boy and The Way Back.

However, as Inside the Rain ended, it hit me: what exactly does the “inside the rain” mean? Sure, there’s rain, and yes, Ben and Emma are at one point inside it, or at least under it, but the entire metaphor is lost on me. And so are many other pieces of Inside the Rain. As Fisher shifts from offbeat comedy to self-serious drama to star-crossed romance and back to comedy again, much of the story beats are unquestionably underdeveloped or overtly shallow. It’s not rough around the edges, it’s just rough.

In their supporting roles, Rosie Perez and Eric Roberts have the tendency to blow their scene counterpart off the screen. The disparity between their talents and those around them is fairly obvious, and their characters don’t even have highly engaging dialogue to say.

As for Ellen Toland, her character is the quintessential hooker with a heart of gold archetype. At times, she’s more of a screenwriter’s fantasy than an actual character. She immediately becomes interested in Ben, although it’s difficult to understand why.

Whether or not Inside the Rain fits the description of outsider art, those sentiments are all over this film as it takes an unconventional approach to a story that Hollywood generally smothers in sap and fake emotion. The flaws in Inside the Rain are abundantly clear, but it’s raw and has a big heart, thanks in large part to Aaron Fisher’s willingness to share his story honestly.

For all its warts, Inside the Rain yearns for acceptance across the board. There may be perplexing aspects of their relationship, but there’s something oddly sweet about seeing Emma and Ben come together. Generally, they stand for all neuroatypical people and sex workers as they strive to find some sort of societal acceptance. Watching them find comfort in each other isn’t your standard definition of beautiful, yet I suspect Inside the Rain is never going for that descriptor. That trait might be the movie’s biggest strength.

Thank you for reading! What are your thoughts on Inside the Rain? Comment down below!

[…] the maternity ward, and she begins to unravel a more troubling reality. Heather was diagnosed with bipolar disorder which leads to the couple having multiple […]