‘Bad Trip’ is Exactly as Advertised: a Stupid, Good Time 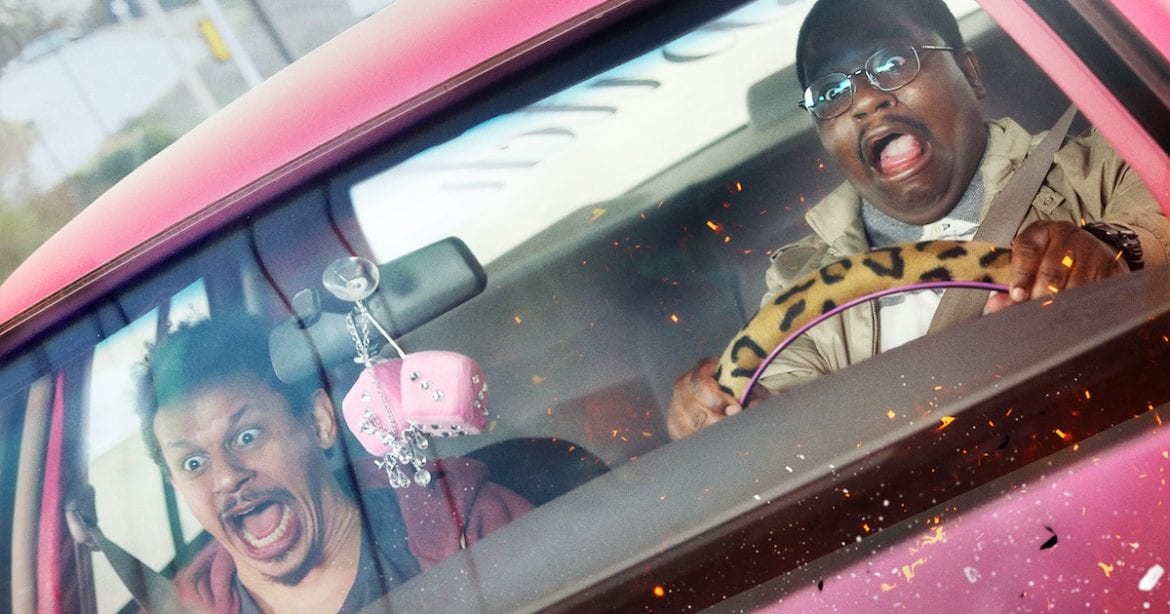 Days before the release of Bad Trip, I had discovered the wonderful stupidity of The Eric André Show. It’s a baffling show, not just hilarious, but sometimes eerily surreal. It’s not a show that wants you to relax, it wants to keep you on edge. It’s a mixture of hidden-camera sketches with celebrity interviews, though many of these celebrities are played by impersonators. It’s these faux interviews that get especially bizarre. Anything can happen. Strange men might lurk behind the host, the musical crew might suddenly make screeching and disturbing noises, gunshots might blare in the background, or Eric André will suddenly turn violent and destroy his desk. Think Between Two Ferns on acid — and even then you won’t come close to its unique brand of weirdness.

Eric André has co-starred in numerous films but Bad Trip is his first lead performance in a feature film. The film, co-written and produced by André, is also directed by Kitao Sakurai, who also worked with André on his show, therefore Bad Trip doesn’t stray too far from his comfort zone. Yet instead of making a feature film based on his persona in the show, such as Zach Galifianakis did for Between Two Ferns or Sacha Baron Cohen did for Borat and Bruno, the film features an “original story” that is interspersed between hidden-camera hijinks. It doesn’t venture into the surreal, but it will certainly garner some delicious, cringeworthy hilarity.

Being a new fan of the show, I had high hopes for Bad Trip, especially since the trailer made me laugh quite a bit. As you can probably guess, the film was supposed to be released on the big screen until a certain pandemic ruined its chances for box office success. Strangely, the film was prematurely released on Amazon Prime on April 17th before it was taken down. If you were lucky, you saw it then. If you were too late, that’s too bad. You will have to wait for its official release as it’s absolutely “impossible” to upload this film elsewhere…

Chris (Eric André) is like many underachievers out there, a day-dreamer with a dead-end job. When he spots an old high-school crush, Maria (Michaela Conlin), he finds a new purpose in life. During their meeting, she invites him to come to see her art show in New York. Believing her to be the love of his life, he aims to meet her again and profess his love.

He convinces his best friend, Bud Malone (Lil Rey Howery), to go with him to New York. For transportation, they decide to take the car of Bud Malone’s sister, Trina (Tiffany Haddish), since she was recently apprehended and is being transported to a maximum-security prison.

Naturally, Trina escapes and when she discovers that they took her car, swearing revenge and chasing after them. On the way, many things go wrong, silly things happen, and friendships are tested. And we can only hope that Chris will find the love of his life before Trina murders Bud and him…

If you like the trailer of Bad Trip, it seems likely that you will also like the film. Bad Trip delivers on its comic premise. The live sketches are meticulously timed — they have to be for obvious safety reasons — and the natural reactions of people who have no idea what’s going on, are hilarious and gloriously cringy.

Sometimes the humor can be quite scatological — the highlight being one featuring gorilla sperm — but most of the humor comes from the shocked and perplexed reactions of the people. Unlike Borat or Bruno, however, Bad Trip does not aim to reveal the stupidity of common Americans. Rather Bad Trip shows how helpful most regular people are, how even when they are pushed beyond any sensible limits, they aim to do the right thing. This can be seen in one particular sketch involving a mock car accident.

At the same time, you can also see how easily complacent people can be. The aforementioned Gorilla sketch is so ridiculous, you’d think some people would get a little suspicious.

Even though I would have loved to see Eric André and Hannibal Buress together again as a mini-reunion from the show (this might have been the original conceit, but perhaps Buress wasn’t available), Howery is a more than suitable replacement and works well with Eric.

The show-stealer is surprisingly Tiffany Haddish, who gives a surprising street grit to her character as Trina. She even manages to give a little bit of menace to her character. People genuinely seem to believe her when she threatens to murder the people who stole her car. The finale featuring Trina in the art show is one of the film’s comedic highlights.

The characters are as thin as they come, however. They are funny, but it’s the ridiculous situations that create most of the laughter, not the characters they create. This is unlike Sacha Baron Cohen for example, as his character creations are often funnier than the sketches themselves.

The thin story and characters are just there to build a narrative around the sketches. It works because it’s funny enough, yet I did wish there was a little more to it. Both Borat and Bruno feature some rich political and social commentary amid the wackiness. Both these films featured a typical Hollywood three-act structure, but each came with a smart satirical bent. This is something that Bad Trip unfortunately misses. It gives us the humor, but it doesn’t really have anything to say.

Although, if you’re a big fan of White Chicks, the ridiculously successful undercover comedy by the Wayans Brothers (I’m not), you’re going to love the ending of this film.

Ultimately, it’s hard to say Bad Trip is a bad time. It’s exactly as funny as advertised. Its brisk running time is filled with countless comedic delights. I would have preferred something more satirical and bizarre, as The Eric André Show itself, but it’s nonetheless satisfying.

Don’t forget to watch the end credits too as you see some humorous behind-the-scenes footage — and the reactions of people discovering they were part of a prank is sometimes funnier than the sketches themselves.

Thank you for reading! What are your thoughts on Bad Trip? Comment down below!

[…] Jack throws away some of his old stuff after his parents die in a freak accident, including his childhood teddy bear, Benny. But, in a twist of fate, Benny springs to life! He […]