Panos Cosmatos and Peter Weller team up to blow your mind! 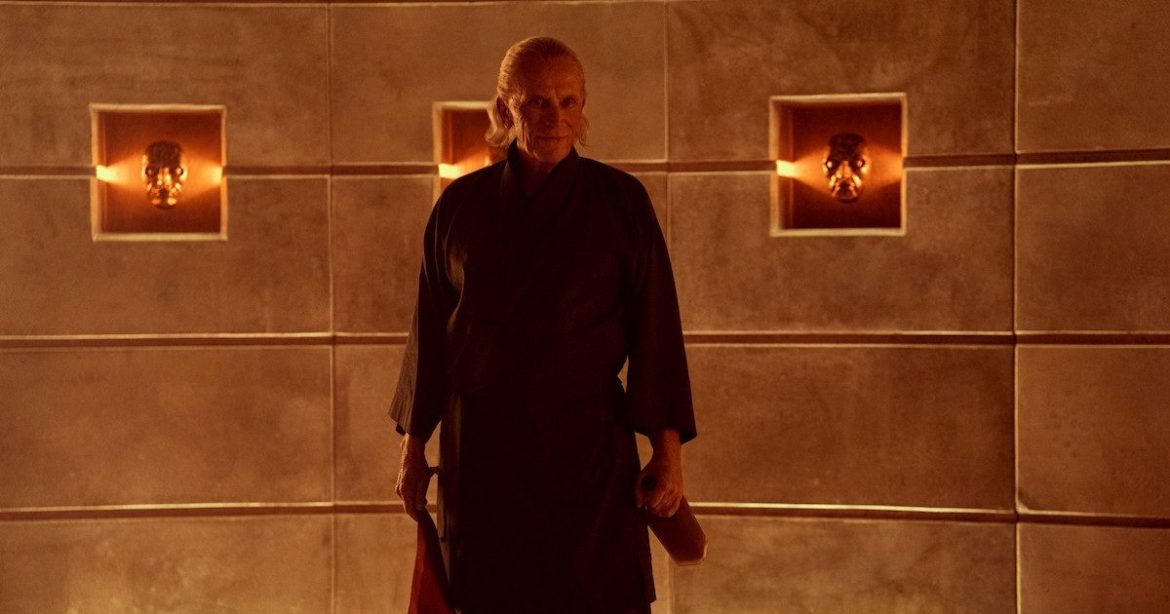 I have seen things that will make you shit your mind, Kemosabe.

Imagine Peter Weller sitting at the head of a round table with long white hair, draped in a silk Japanese robe, snorting cocaine, and spouting conscious, expanding lines, such as “striving for a feeling of innate transcendence.” A funky, synth-heavy tune plays in the background, and the room is glazed over in bright orange lights. This is all part of the strangest episode of Guillermo del Toro’s Cabinet of Curiosities. An episode that spends most of its in one room with people talking to each other, feeling almost like a stage play, before erupting in Lovecraftian chaos in the last glorious fifteen minutes.

Things become much clearer if you’re aware of the director’s previous cinematic works, Beyond the Black Rainbow and the masterful Mandy. His aesthetics are all over this episode: slow pace, synth music, bright neon colors, and psychedelic imagery. And like these two films, this episode takes place in the past, though this time not in the eighties, but in 1979. It’s clear that Panos Cosmatos received extensive creative freedom. A lot of times when auteurs direct TV episodes, their style is buried under the conventions of TV, but not for this series. This is a pure, unadulterated Cosmatos joint, and boy is it a trip.

Four strangers with distinct talents are invited to a “viewing” by a mysterious billionaire by the name of Lionel Lassiter (Peter Weller). The foursome consists of high-profile musician, Randall (Eric André, yes, that Eric André), brilliant astrophysicist, Charlotte (Charlyne Yi), a self-proclaimed psychic, Targ (Michael Therriault), and dismissive novelist, Guy (Steve Agee). Upon first impressions, it’s clear that Lionel researched them thoroughly, as all four of them are greeted with their favorite choice of liquid substance. Lionel has great reverence for each of these individuals, telling them how important their creative outputs or intellectual insights are. During this invite, they are all encouraged to partake in numerous mind-altering substances, under the guidance of Lionel and his guiding physician, Dr. Zahra (Sofia Boutella).

As the episode takes its sweet time, passing beyond its halfway mark, you wonder where this is going. Not that you aren’t enjoying yourself. The dialogue and atmosphere make up for any lack of action or creature feature gore. It almost feels like a hangout movie for a while, though you know there’s something sinister lurking beneath it all. Whatever they are there for, it can’t be good. Something is waiting for them, and when it’s time, things are going to be truly bizarre.

In its hour, heavy themes are established. Lionel is a man who has everything, who had the means to pursue all manner of pleasure that the world had to offer. Similar to Frank Cotton’s character in Hellraiser, he doesn’t care how far he must venture into the abyss to experience something truly unique.

It’s his character that receives a full arc in the end, though to explain more would mean divulging the wonderfully bonkers climax.

Even with its slow pace, this could have easily been a feature-length film. Every character is interesting and deserving of a longer narrative. A vast history of each character is established through smart exposition that never feels forced. The dialogue veers from conversations of existentialism, architecture, and esoterism — all of it sounding so eloquent through Weller’s smooth delivery. It never becomes pretentious, and even when it does, it serves to indicate the character’s flatulent personality.

All of this proves that Cosmatos is not only a master of visuals and atmosphere, but he can also easily handle dialogue-heavy scenes. (The script was written by him and his frequent collaborative writer, Aaron Stewart-Ahn.)

Strangely, the most memorable monologue in the film is performed by Eric André, whose musing about the “void” within us perfectly encapsulates the evil that Lionel is haunted by and seems completely oblivious to. If you’re a fan of André, his performance here proves that he can do dramatic acting, though his character is deprived of the occasional necessary moment of brevity.

The finale is something to behold. It’s certainly going to alienate some, but that’s okay. That’s the beauty of del Toro’s show: it doesn’t have to be for everyone. Cabinet of Curiosities isn’t just an anthology horror show, it’s a show meant to present some of the greatest talents in the horror genre. To give them the creative space to create something wonderfully gruesome. So if you don’t like bright lights, synth music (courtesy of composer Daniel Lopatin — I consider his work on this episode the best of the season), and Peter Weller (is there anybody on this freaking planet who doesn’t like him?), watch any other episode.

If I had a complaint, it would be about how some of the climatic effects were executed. Without spoiling too much, it just made me long for the days when Screaming Mad George was hired to do such gooey effects.

But it doesn’t take away from what is one of the strangest, insane pieces of television you’ll see this year.

Thank you for reading! What are your thoughts on The Viewing? Comment down below!