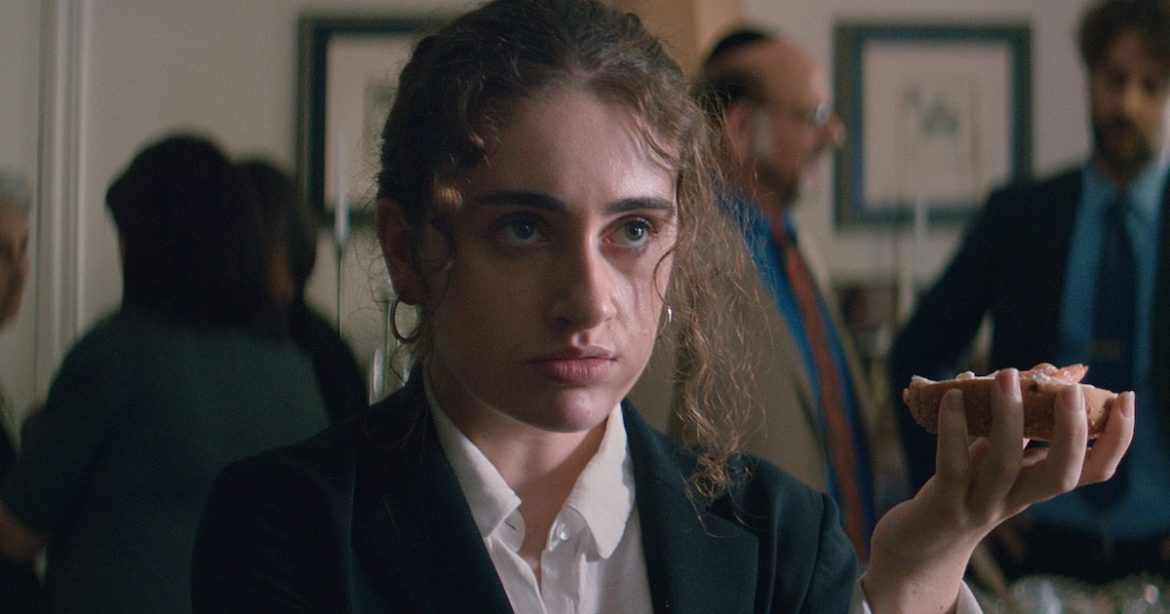 Emma Seligman’s feature directorial debut Shiva Baby, based on her short of the same name, is an awkward comedy with one of the best, most outlandish premises I’ve seen in a long time. Danielle attends a family Shiva where she is accosted by her relatives, outshined by her ex-girlfriend, and comes face-to-face with her sugar daddy and his family.

Part of this year’s Jewish International Film Festival, Shiva Baby blends claustrophobic Jewish humor with a strange occurrence to deliver a film that’s not only fun but incredibly anxiety-inducing throughout as you wait for everything to slip out and create a massive scene. Seligman packs so many awkward interactions into the film that it never feels like it runs out of its comedic potential. Every twist and turn the story takes allows for new, evermore embarrassing scenarios to take hold and develop your intrigue from the very first, rather surprising scene to the funny, tightly compact last.

Having grown up in a Jewish community herself, Seligman’s firsthand experience creates an authentic, amusing look at the intensity of a Jewish Shiva, showing just how invasive families can truly be. Of course, we love them more than anything, but one’s family can control one’s life for their own benefit and self-worth, which creates an uneasy feeling surrounded by multiple unanswerable questions about love, life, and the future. Every teenager, no matter the circumstances, has felt insecure, and unsure of their future at one point or another. Not everyone takes the same path Danielle did, but seeing the perspective of her troubles as she comes to term with her married sugar daddy and her lesbian lover while also trying to hide her double life from her parents, just puts into perspective how far one will go in an attempt to better their situation. She knows from the start what she does isn’t exactly right, but it helps her and thus creates a rather witty social commentary on the behaviors some rebellious teenagers go to escape from their smothering families.

Clocking in at just a mere 77 minutes, every ounce of Shiva Baby is designed to make you dread what comes next while still making you laugh endlessly about it. This works perfectly thanks to the impeccable talents and awkward chemistry stars Rachel Sennott and Danny Deferrari share. As they hide their eccentric relationship from everyone at the Shiva, suspicions arise and secrets spread. However, it’s the partnership and intoxicating chemistry of Rachel Sennott and Molly Gordon, who play Danielle and her ex, Maya, that allows this film to shine above other family dark comedies as their complicated relationship often flip flops throughout the runtime with feelings of hatred, jealousy and an uneasy love taking center stage, creating multiple on scenarios that keep you guessing with both actresses giving two great performances that enhanced every aspect of the screenplay.

The beauty of Shiva Baby lies not in its great cast, nor does it come from the mostly one location setting and event that add to the comedy, it comes down to that integral word ‘awkward’. That one simple word envelops the film, taking every possible cathartic moment and putting an uneasy spin on the final result which culminates in a conclusion that’s both satisfying and hysterical as you watch the father’s good intentions turn into something that leaves everyone miffed.

Overall, Shiva Baby is a fantastic directorial debut from writer/director Emma Seligman, whose style of writing and directing works effortlessly within. It’s a pure blast of energy from the very first, rather awkward start, to its fitting end, culminating in a funny, awkwardly extravagant film.

Thank you for reading! What are your thoughts on Shiva Baby? Comment down below!