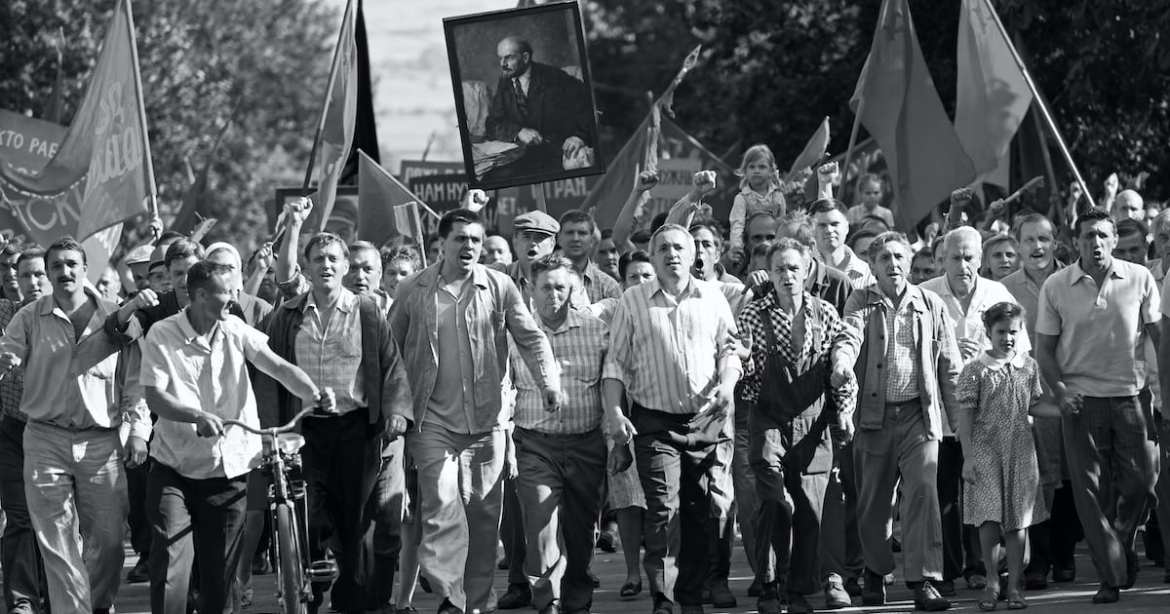 As it happens, human history is so speckled by atrocities, so littered with tragedies and the bodies left behind from them, that We-As-A-Collective are bound to forget more than we memorialize. It’s simply the law of large numbers. This fact is made all the more tragic when considered from the lens that, often, those that do remember are acutely aware that their sustained grief is the only thing keeping these events from truly dematerializing, as if they never happened at all.

And as anyone familiar with these events can tell you, the only thing worse than them happening in the first place is them happening, and the world never noticing them at all.

Perhaps the Novocherkassk massacre of 1962 is not one of these events in Western Russia, where the small city can be found. For the rest of the world, however, the events of that day are introduced to us first, here, in the cold rage of Andrei Konchalovsky’s camera in Dear Comrades!

I have not seen a film so furious about its subject matter in many years. Konchalovsky’s deliberate use of an unmoving camera would seem, in lesser hands, like a boring choice. Here, however, it bristles with barely composed restraint, like the director is telling us this story in a whisper through gritted teeth.

We follow Julia Vysotskaya’s Lyuda throughout the fateful day and its fallout. When we are introduced to her, she is a loyal Soviet Party member, defined by her love of the party. Indeed, when her character is introduced, she is having an affair with a KGB officer (a visual metaphor that already spells out her doom; she loves a state that could never love her the same way).

There has been a labor strike in town, and food prices are skyrocketing. Eventually, a crowd appears at the local municipal office, where Lyuda works. Unbeknownst to her, her daughter is in the crowd. The local police, the Soviet Army, and the KGB are all present and recovering conflicting orders about what to do with the crowd. In the confusion, a shot is fired, and then many more. In the end, some 26 civilians are dead, and the KGB buries them secretly in an unmarked mass grave.

We follow the rest of the film as Lyuda searches for her daughter, becoming more and more panicked and disillusioned at every turn.

The acting and direction in Dear Comrades! are superb. A relative unknown in the states, Konchalovsky is one of Russia’s most decorated filmmakers, and it’s easy to see why this film took home a Special Prize at the Venice Film Festival. Vysotskaya as Lyuda and Yuliya Burova as her daughter are both top-notch as well.

In the end, the title comes from a song that Lyuda sings, returning to town from the field in which the bodies were buried. She is being driven by her KGB lover and, believing her daughter to be among the anonymous corpses lying in the field, she sings a Soviet folk anthem as tears stream down her face.

I defy anyone watching this movie not to feel Konchalovsky’s raw anger in this moment.

The ending is somewhat undercut, but I’ll reserve spoilers for what was truly one of the more affecting movies I’ve seen from the Russian film circuit in a while. These events are due remembering, and far be it from me to deny you, reader, your own opportunity to learn them for yourself.

Dear Comrades is currently streaming on Hulu, and I recommend giving it a watch.

Thanks for reading! What are your thoughts on Dear Comrades? Comment down below!

‘The Year of the Everlasting Storm’ Captures the...